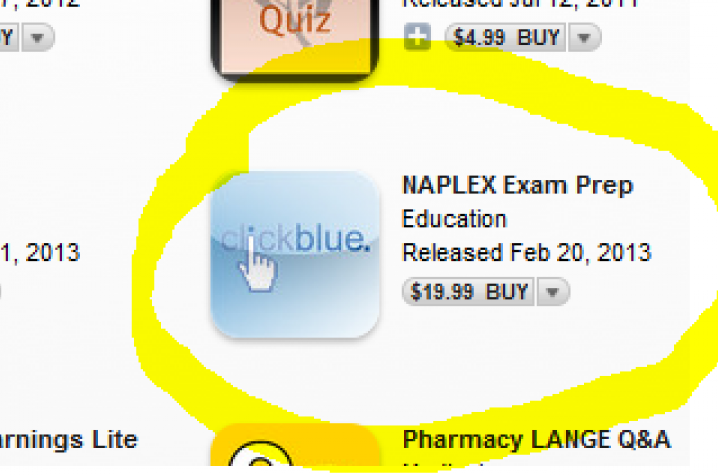 LEXINGTON, Ky. (Feb 21, 2013) — The University of Kentucky College of Pharmacy is the first pharmacy school in the nation to design an app to help students prepare for the national pharmacy board examination.

Considering UK pharmacy students lead the nation in first-time pass rates on the North American Pharmacist Licensure Examination (NAPLEX) over the past 10 years, the app may be a popular one.

Called the “NAPLEX Exam Prep” app, the product was designed by faculty members Frank Romanelli and Jeff Cain and functions as a flash card quiz. It will allow students to test their knowledge on the type of questions they can expect to see on the NAPLEX – right on their mobile devices.

“This is part of our effort to meet students where they want to be met,” said Romanelli, the college's associate dean for educational advancement. “Smartphones and tablets are as much part of pharmacy education as the mortar and pestle today, and we believe that this product is filling an important market need.”

The "NAPLEX Exam Prep" app is available to any pharmacy student across the globe on Apple’s App Store for a cost of $19.95. You can download the app here: https://itunes.apple.com/us/app/naplex-exam-prep/id597415480?mt=8. The app will soon be available on Google Play, formerly known as the Android Market. The app represents the college’s first foray into the burgeoning app market.

Once downloaded, those preparing for the NAPLEX can partake in a quiz anytime, anywhere. The questions were part of a mock NAPLEX exam created by Romanelli in an elective course he instructs at the college.

“We wanted the app to be accessible and spontaneous,” said Cain, the college's director of educational technology. “We designed it so students could take a quick quiz whenever they had a few minutes to spare, while riding on a bus or during a lunch break, for instance. It is very much like having digital NAPLEX flash cards at your fingertips, 24 hours a day, seven days a week.”

The NAPLEX Exam Prep app is a product of clickblue, an innovative online educational platform, which provides professional development offerings to pharmacists around the world.

“I applaud Drs. Romanelli and Cain for their creative approach in developing the NAPLEX app,” said Timothy Tracy, dean of the college. “The most successful organizations in the world deliver their content via mobile technology, and as one of the nation’s leading colleges of pharmacy, we are committed to being at the forefront in all phases of pharmacy education.”