LEXINGTON, Ky. (Aug. 7, 2017) — Imagine humankind at the dawn of civilization, or even earlier. Men, women and children huddle mesmerized, terrified in their ignorance, as a bright sunny day suddenly darkens until the sun vanishes and stars appear in the midday sky. It is dark long enough for night creatures to make an appearance. Imagine the confusion, the panic, the helpless terror that undoubtedly engulfed those people of a darker age who had no idea if their life-giving sun would ever return.

Today, humankind is blessed with the knowledge that when the skies darken and the stars appear midday over a 100-mile-wide swath of the continental United States — including Western Kentucky — on Aug. 21, the total solar eclipse shall pass and the sun shall return to brighten our day.

That knowledge, however, does not dim the awe at nature’s most astounding celestial experience. Even professional astronomers who have witnessed this most powerful of nature’s phenomenon many times still speak in awe-struck voices.

The heavens align for a solar eclipse about once each year at some point on the globe. But the prime-viewing area, known as the path of totality, which always spans about 100 miles and measures over 1,000 miles in length, is scattered around the globe each year. In 2017, that path of totality sweeps across the continental United States from Oregon to South Carolina, right across Western Kentucky and Tennessee early in the afternoon of Aug. 21.

For details about specific sites, visit one of the many websites with an eclipse map, including http://eclipsewise.com or NASA’s site at https://eclipse2017.nasa.gov.

Most of Kentucky will view less than the 100 percent experience the western edge of the state will enjoy. Lexington’s occurrence will be about 95 percent coverage of the sun. Considering weather patterns typical of this region in August, Kentucky has a 50-50 chance for an excellent sighting.

Lexington won’t see the midday stars that day, but it will experience daytime’s most significant darkness about 2:30 p.m., local time.

The last visible total solar eclipse in Lexington was in 1869, and the next one will be 2153. And yet, through some quirk perhaps only the universe understands, another total solar eclipse will be viewed in the state seven years from now in roughly the same area of Western Kentucky (near the cosmically favored city of Paducah) on April 8, 2024.

University of Kentucky Professor of Astronomy Tom Troland speaks with childlike wonder and excitement when talking about this month’s total solar eclipse, though he has traveled the globe chasing this elusive prey his entire career. He has been in the right spot at the right time on five separate occasions around the globe, but bad weather hampered viewing, and he has successfully seen the phenomena only twice. But he can talk for hours about those two precious incidents; he remembers every moment with extraordinary detail and precision.

“If you are in the path of totality at the right time on the right day (in clear weather) then you will see one of the most remarkable physical phenomena imaginable. It is, in fact, the most spectacular event in nature,” Troland said.

In Hopkinsville, a city in Western Kentucky that will be the point of greatest eclipse, the event begins about 11:56 a.m. CDT as the moon begins to pass between the Earth and the sun. For the next hour and a half, the sun is increasingly covered by the moon. Then, at about 1:26 p.m. within this path of totality, the entire disc of the sun will become covered for 2 to 2½ minutes. It is during this precious tiny window, which will be about as bright as a normal full moon, one will see the sun’s outer atmosphere, the pearly white corona, and stars will appear in the sky. Then, the area slides into another partial eclipse for about 90 minutes until approximately 2:51 p.m. when the celestial event ends. For specific times for communities in Kentucky along the path of totality, visit: https://eclipse2017.nasa.gov/sites/default/files/ky.jpg.

UK’s physics and astronomy department and K-Week organizers will present an educational and observational eclipse experience for all students 1:30-3 p.m., Aug. 21, at the William H. Pieratt Intramural Fields at the intersection of Cooper Drive and University Drive. Associate Professor Ron Wilhelm will provide information and lead discussions about the eclipse. A limited supply of appropriate eyewear will be available, but a projector will show an image of the eclipse in real time on a screen large enough for several to observe.

For all its mystery and grandeur, a solar eclipse can be exceedingly dangerous to one’s eyesight, in the extreme causing blindness and other eye ailments. As serious as this danger is, it is easily mitigated by wearing special, exceedingly dark-lensed glasses.

“A total eclipse of the sun is an incredible thrill, although it does come with some danger … a very easily mitigated danger. During the partial phase of the eclipse, the hour and a half when the sun is becoming more covered, but isn’t completely covered up, one risks damaging their eyes if they look directly at the sun,” Troland said.

It’s not that the sun is more dangerous during a solar eclipse than on any other ordinary day, said Troland. It’s our viewing habits. Normally, we simply don’t stand around staring at the sun for long moments, much less hours. Even catching one quick glance after another on a sunny day — or during a solar eclipse — can cause injury and damage to one’s eyesight.

Adequate eye protection is easily available and must be worn throughout the viewing period in areas where the eclipse can be observed, including Lexington. Inexpensive, paper glasses — specifically certified for eclipse viewing — are available online. However, buyer beware! Some glasses sold as eclipse-safe are not. Be sure the glasses you use have very, very dark lenses. When looking through the lenses on a normal sunny day, one should see nothing at all, except perhaps a pale blur when looking directly at the sun.

However, Troland did recommend, especially for those in Lexington or other locations outside the swath of the total eclipse … looking to the trees.

“Find a tree that you can see the sunlight filtering through the leaves, speckling the ground with spots of sunlight,” Troland said. “Each of those little specks of light on the ground is (like) a pinhole image of the sun. Normally, those spots of light are round. But during the partial phase in an area of total eclipse — or throughout the event in Lexington — those shimmering, shifting round spots of sunlight will be crescents or other different shapes, but never truly, completely round.” 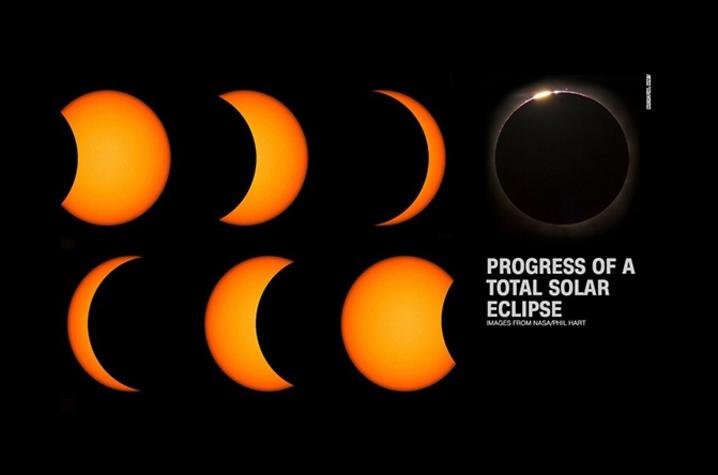 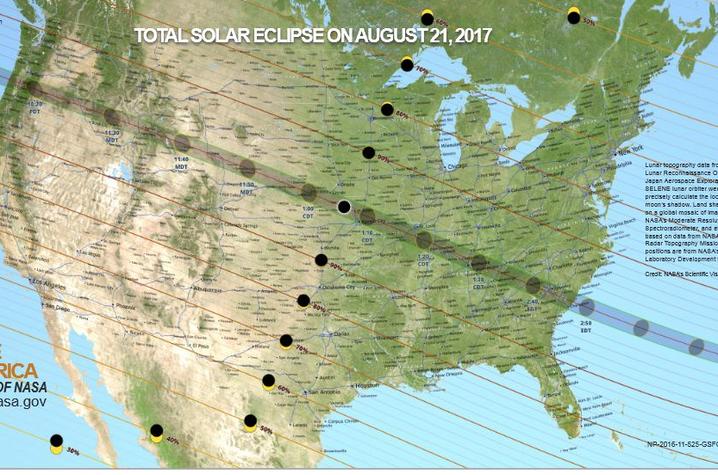 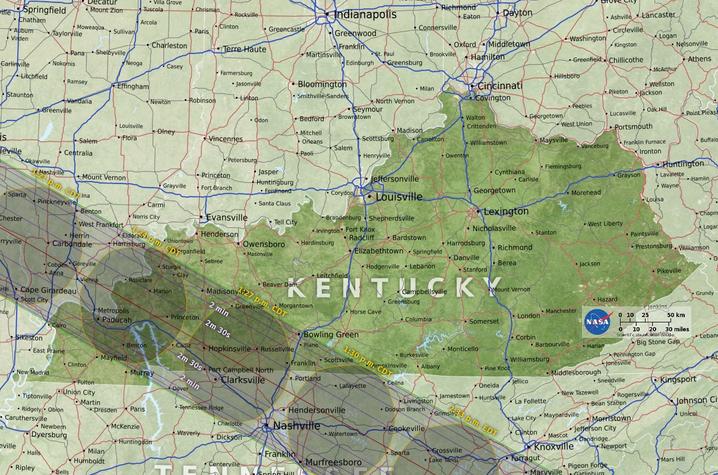