Watch live at 10 a.m. and 3 p.m. as UK honors its December 2019 graduates. Please ensure your device's software is up to date.

More than 1,000 students are expected to attend Friday's ceremonies; overall, approximately 1,800 total degrees have been approved by the UK Board of Trustees. August 2019 degree recipients are also eligible to participate in the December ceremonies. More than 900 degrees were conferred for August.

Doctoral, master's and baccalaureate degree recipients are recognized together based on their colleges.

Due to construction around Rupp Arena and Lexington Center, parking and entry information is limited. Graduates and their guests should arrive at least one hour before the start of their ceremony. View a parking map here.

An honorary degree will be presented at the 10 a.m. ceremony to Porter "P.G." Peeples, president and chief executive officer of the Urban League of Lexington. Peeples is a 1968 graduate of UK — one of the few African American students to enroll and graduate at that time. The following year, at the age of 22, Peeples was named the director of the new Urban League of Lexington, making him the youngest chapter director in the United States. He has dedicated his life to serving Lexington and its African American community through an over 50-year career of civil rights and social justice advocacy with the Urban League. Read more about Peeples.

In addition to UK President Eli Capilouto, a student representative will address the audience at each of the ceremonies, as per UK tradition. Daniel Beasley, from Elizabethtown, Kentucky, is graduating with a bachelor's degree from the College of Social Work. He will give the Commencement address at the 10 a.m. ceremony. Ndeye Matou Amar, from Senegal, West Africa, is graduating with a bachelor's degree in psychology from the College of Arts and Sciences. She will deliver the Commencement address at the 3 p.m. ceremony.

While all graduates are celebrated for their tremendous achievements, many have particularly interesting stories to share about their lives and time at UK. 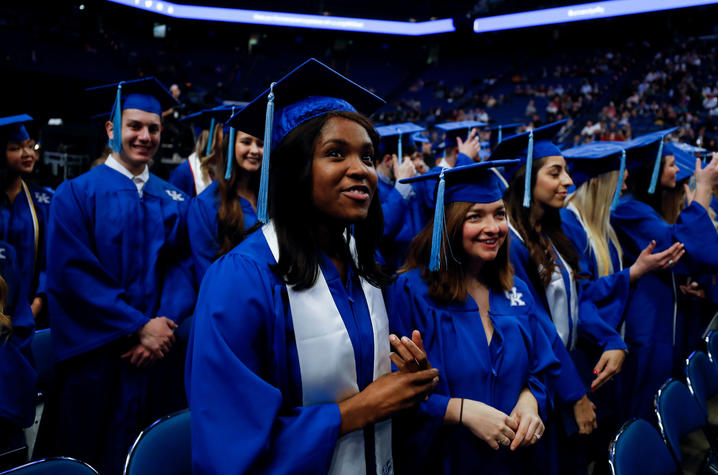