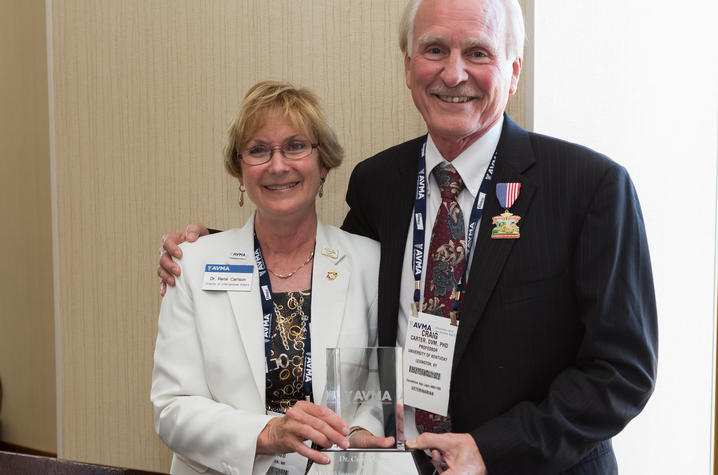 LEXINGTON, Ky., (Aug. 29, 2016) — The University of Kentucky’s Craig Carter is a recognized leader in veterinary medicine around the world. Recently the American Veterinary Medical Association presented the 2016 International Veterinary Congress Prize to Carter, director of the Veterinary Diagnostic Lab in the UK College of Agriculture, Food and Environment. The prize recognizes his international contributions to veterinary health.

“Throughout his career, Dr. Carter has displayed a strong commitment to improving international understanding of veterinary medicine,” said Joe Kinnarney, AVMA president. “He is a service-oriented individual whose contributions to One Health efforts have had far-reaching effects across the globe. I congratulate him on this award, and thank him for his many years of dedication to international veterinary medicine and tireless efforts to improve public health in the United States and around the world.”

“This is a great and exceedingly humbling honor that I accept on behalf of so many contributing to international veterinary medicine,” Carter said.

Carter earned a doctorate in veterinary medicine, a master’s degree in epidemiology and a doctorate of philosophy in veterinary public health from Texas A&M University. UK recruited Carter to the College of Agriculture, Food and Environment in 2005 to build an epidemiology program that would provide for the early detection of animal disease outbreaks such as Mare Reproductive Loss Syndrome. In 2007, he was appointed to his current position as director of UK Veterinary Diagnostic Laboratory where he oversees lab operations, conducts research and works with graduate students.

He also is on faculty at the UK College of Public Health and at the Lincoln Memorial University College of Veterinary Medicine in Harrogate, Tennessee. Carter’s military career spanned four decades, starting with active duty and then reserves in the U.S. Air Force and later in the U.S. Army Reserve, from which he retired as a colonel in 2009.

Upon his retirement, Carter received the Army Medical Reserve Legion of Merit for service throughout his 30-year career as veterinary readiness adviser for the U.S. Army Reserve Medical Command. He also received the Joint Service Commendation Medal for service as senior veterinarian in Task Force Ramadi, Iraq, in 2008. He received the Bronze Star in 2002 for commanding the first U.S. Army veterinary reserve unit deployed to Afghanistan after 9/11.

Carter has been very engaged internationally as a consultant to the Department of Defense, U.S. Department of Agriculture Foreign Agricultural Service (USDA FAS), the World Organization for Animal Health and the U.S. Agency for International Development. He recently traveled to Vietnam, Iraq, Kuwait, Qatar, Bahrain, Jordan, China, Thailand, Australia, Uruguay, Nicaragua and Ethiopia, where he evaluated diagnostic laboratories, delivered lectures and participated in nation-building activities. In 2009, he participated in a USDA FAS mission to Afghanistan to advise the Afghanistan Ministries of Agriculture and Public Health on strategic planning for veterinary diagnostic laboratories, animal disease monitoring and surveillance and public health. Since 1999 as executive director of the World Association of Veterinary Laboratory Diagnosticians, he has coordinated and helped to plan eight international meetings in various countries to advance the field of diagnostic veterinary medicine around the world.

Earlier this year, Carter took the helm of the American Veterinary Epidemiology Society as president for a five-year term.