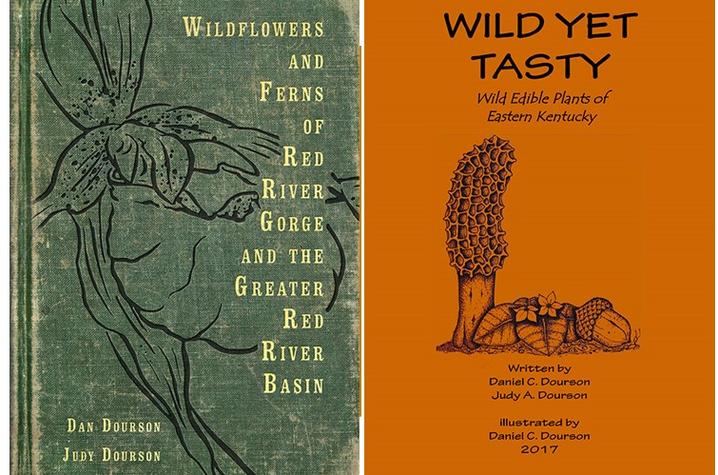 "Wildflowers and Ferns of Red River Gorge and the Greater Red River Basin" and "Wild Yet Tasty: A Guide to Edible Plants of Eastern Kentucky" by Dan Dourson and Judy Dourson were published as part of University Press of Kentucky's South Limestone imprint.

LEXINGTON, Ky. (June 18, 2019) — After the 1962 Red River flood that devastated many lives and homes, local communities and government officials called for construction of a dam that would ultimately turn the Red River Gorge into a lake. Opposition to the building of the dam was immediate, and the University of Kentucky commissioned Wendell Berry to write "An Unforeseen Wilderness" to advocate for the protection of the gorge. In 1993, a federal law protecting the Red River Gorge was passed, preserving the region and the ecosystems within it. Today, it attracts over 500,000 visitors looking to hike, rock climb and admire the natural beauty of the region, generating nearly $4 million dollars annually in this economically deprived area.

For those who are drawn to the beauty of the Red River Gorge, Dan Dourson and Judy Dourson have published through University Press of Kentucky's new South Limestone imprint "Wildflowers and Ferns of Red River Gorge and the Greater Red River Basin," the first guide specifically devoted to the biodiversity of the Red River Gorge and its watershed and the more-than 1,500 plant species found there. The Doursons focus on the watershed in its entirety and present a detailed natural history of the region to complement the species they profile. With over 800 color photos, along with numerous line drawings, figures and maps, the book is designed to be both useful to the seasoned naturalist and accessible to the casual hiker.

The authors look at rare and endangered species in the watershed, as well as some nonflowering plants that are not widely known, such as green algae, fungi, slime molds, lichens and mosses. Also included is a section on flowering woody vines, shrubs and trees. Each species description includes the common name, the scientific name, physical properties, where it can be found, the type of environment it requires, how large it grows, and if it flowers or not. This extensive information, along with a picture of every species introduced, makes the book the most comprehensive nature guide to Kentucky’s popular natural recreational area.

To coincide with the publication of "Wildflowers and Ferns of Red River Gorge and the Greater Red River Basin," the Doursons have also written "Wild Yet Tasty: A Guide to Edible Plants of Eastern Kentucky." This compact guide follows a simple framework: a brief pictorial description of basic terms used for edible plants and detailed illustrations and descriptions for each species are included. The species descriptions include scientific as well as common and locally-used names, species characteristics and preferred location, specifics about edible plant parts, and the best time to harvest. Covering the most commonly found and easily identifiable species, from blueberries and huckleberries to wintergreen and sumac, this guide is an invaluable resource for hikers, climbers and campers visiting the area.

A region that was almost lost is now widely recognized as one of the most significant ecosystems in the Commonwealth, featuring the microclimates that harbor plant species that can be found nowhere else in the world. Currently there are at least eight unique plant species in the region, and three of those eight are relatively new to science. "Wildflowers and Ferns of Red River Gorge and the Greater Red River Basin" and "Wild Yet Tasty" combine to bring a new understanding to this biologically rich and popular destination.

Dan Dourson is a wildlife biologist who worked with the U.S. Forest Service specializing in nongame management in Red River Gorge. He is the author of 10 books, including "Land Snails of Belize," "Central America" and "Land Snails of West Virginia."

Judy Dourson is an educator, researcher, field technician and editor. She has served as Dan’s field assistant, primary researcher, and editor, and has co-authored several books with him.

Individuals who would like to learn more about these books can hear from the authors at this month's Kentucky Proud Evenings, presented by the Fayette County office of the University of Kentucky Cooperative Extension Service in the College of Agriculture, Food and Environment. The free monthly series celebrates the state's rich literary culture with author discussions and samples from Plate It Up! Kentucky Proud recipes.

University Press of Kentucky is the scholarly publisher for the Commonwealth of Kentucky, representing a consortium that includes all of the state universities, five private colleges and two historical societies. The press’ editorial program focuses on the humanities and the social sciences. Offices for the administrative, editorial, production and marketing departments of the press are found at the University of Kentucky, which provides financial support toward the operating expenses of the publishing operation.