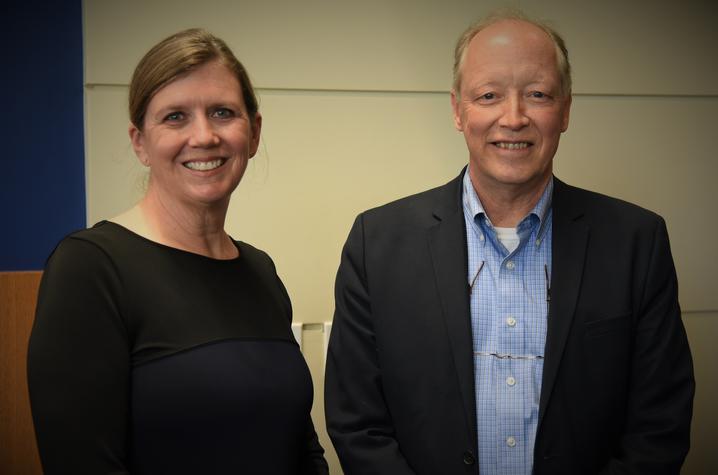 Suzanne Segerstrom, professor in the Department of Psychology, was presented the 2019 Albert D. and Elizabeth H. Kirwan Memorial Prize, given each year to a faculty member in recognition of outstanding contributions to original research or scholarship, with an emphasis on work produced four years prior to the award.

Brett Spear, professor in the Department of Microbiology, Immunology and Molecular Genetics, was presented the 2019 William B. Sturgill Award, given each year to a graduate faculty member who has made outstanding contributions to graduate mentoring and graduate education at UK.

Segerstrom has achieved a record of scholarship that ranks with the most distinguished faculty members at UK. Her research primarily addresses the influence of individual differences in personality, cognition and emotion on psychological health and physiological functions.

In addition to her excellence as a researcher, Segerstrom is an outstanding mentor. Her 38 publications in the past four years include 25 manuscripts on which her graduate students are co-authors, and 16 of those manuscripts are first-authored by her students.

"Dr. Segerstrom is one of the pre-eminent researchers on self-regulation in the world. Her accomplishments over the past four years have solidified her status as a leader in her field," wrote Christia Spears Brown, associate chair of psychology, in a nomination letter.

Established in 1995, the Kirwan Memorial Prize recognizes its namesakes' collaborative research efforts, as well as Albert Kirwan's endeavors in creating an environment at UK that promotes high quality research and scholarship.

Head football coach from 1938 to 1944 and later dean of men, "Ab" Kirwan was a distinguished faculty member and scholar in the field of Southern history, dean of The Graduate School and served as UK president from 1968 to 1970.

Elizabeth Kirwan was awarded the Sullivan Medallion in 1973 for her service to UK and the Lexington community. She held executive roles in more than 10 organizations, including president of the UK Woman’s Club and chairwoman of the Lexington Parks and Recreation Board.

Spear has been a faculty member at UK since September of 1989. He holds joint appointments in the Graduate Center for Nutritional Sciences and the Graduate Center for Toxicology and has done two month-long stints as a visiting faculty member at Shandong Medical School in Jinan, China. Spear is currently the director of graduate studies for the Integrated Biomedical Sciences (IBS) program in the College of Medicine. IBS is the first-year umbrella program under which doctoral students are recruited into the basic sciences before matriculating to individual departments.

Spear is well-regarded as a dedicated professor — having mentored 12 postdoctoral trainees, 28 graduate students and 46 undergraduate students. He has also served on more than 100 dissertation committees. His influence on graduate education extends beyond his department through his service as co-chair of the campuswide 2017-18 Blue Ribbon Panel on Graduate Education.

"Throughout my tenure, I have observed Dr. Spear’s contributions towards the development of other graduate students, fostering their development as young, budding scientists," Alex Nail, a graduate student, notes in her nomination letter. "Dr. Spear has innately known when to challenge me, when I need support and when to cultivate my independence throughout my graduate career."

Established in 1975, the Sturgill Award is named in honor of William B. Sturgill, who contributed to higher education through organizing and serving as president of the Hazard Independent College Foundation, in addition to working with legislators to develop the community college system in the Commonwealth.