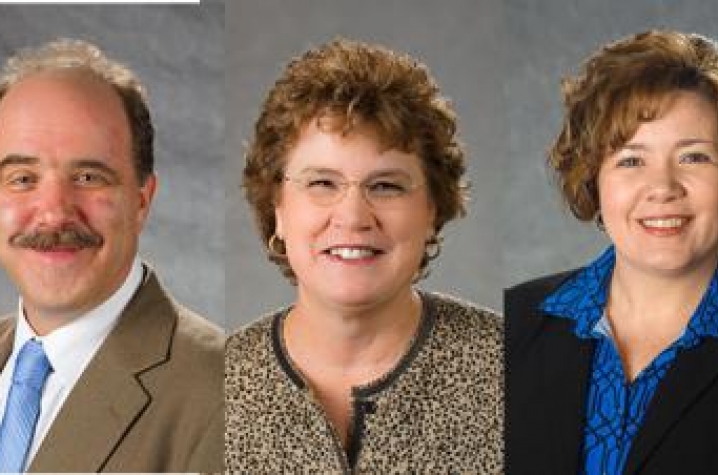 The biannual awards recognize individuals within the school, which is part of the UK College of Agriculture, Food and Environment. They are named for Todd, a school alumna and wife of former UK president Lee T. Todd Jr. The Todds fund the $1,000 awards.

Leadership in Graduate Education: Alexander Vazsonyi. Since coming to UK in 2011, Vazsonyi has mentored a diverse group of graduate students in his role as the John I. and Patricia J. Buster Endowed Professor in the Department of Family Sciences. He currently serves as the major professor for eight doctoral students and three master’s students. Vazsonyi and his students study issues related to adolescents and their families, specifically achievement, problem behaviors, health-comprising behaviors, violence and deviance. He has co-authored 29 journal articles and 10 book chapters since coming to UK. Many of these publications were written in collaboration with graduate students.

Administrative Leadership: Debra Cotterill. As director of the Nutrition Education Program in Family and Consumer Sciences Extension, Cotterill provides leadership for the U.S. Department of Agriculture-funded Expanded Food and Nutrition Education Program and the Supplemental Nutrition Assistance Program-Education. The two programs help low-income individuals learn to eat healthier and to stretch their food dollars. Since Cotterill became director in 2011, SNAP-Ed program funding has dramatically increased, the number of professional staff within the state office has nearly tripled and the number of county program assistants working directly with clients has doubled. She has directed the expansion and revision of the program’s curriculum, the launch of a social marketing campaign and program evaluation enhancements.

Cooperative Extension: Christy Nuetzman. Recognizing the need for substance abuse education for youth in Clinton County, Nuetzman, family and consumer sciences extension agent, created a role-playing simulation program that explores the realities of all forms of substance abuse and misuse. In the past programming year, 33 Kentucky counties conducted the program, called Truth and Consequences: The Choice is Yours. The program is also being used in other states. Nuetzman has also tackled obesity issues in her community. Through a Centers for Disease Control and Prevention grant she has worked with community partners to improve local infrastructure and capacity to help fellow Clinton Countians make better health choices. Throughout her career, Nuetzman has maintained a strong dedication to serving all the residents of Clinton County.