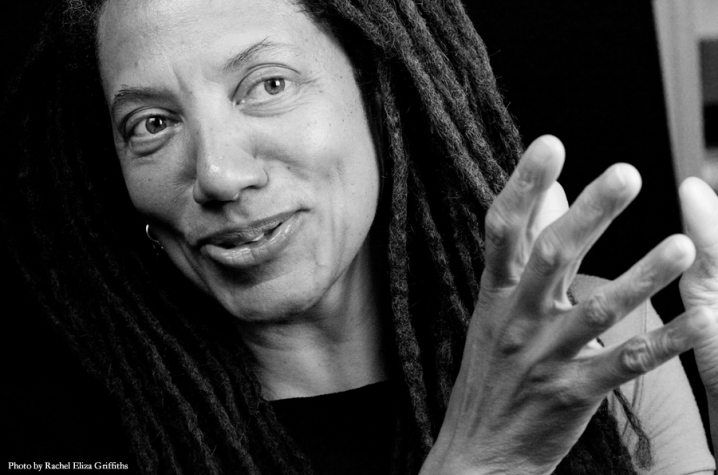 “Head Off & Split” was published by Northwestern University Press in February of this year, and Finney has been touring with the book since late winter.

The renowned poet's acceptance speech traced the history of repressed literacy and creativity found throughout her South Carolina home, saying, "The ones who longed to read and write were forbidden…the king's mouth and queen's tongue arranged to perfection on the most beautiful paper…determined to control what can never be controlled: the will of the human heart to speak its own mind."

In addition to honoring her teachers, mentors and Northwestern University Press, Finney spoke of her mother, Frances Davenport Finney, an elementary school teacher and Newberry, S.C. native who "made Christmas, Thanksgiving and birthdays out of foil, lace, cardboard and paper-mache, insisting beauty into our deeply segregated southern days" and her father, Ernest A. Finney Jr., civil rights attorney and retired South Carolina chief justice and "chief opponent of the death penalty in South Carolina for 50 years."

Finney ended her speech, which host John Lithgow called "the best acceptance speech for anything I'd ever heard," with a quote from Reverend Dr. Katie Cannon, the Annie Scales Rogers Professor of Christian Ethics at Union Theological Seminary/Presbyterian School of Christian Education in Richmond, Va., and the first African American woman ordained in the United Presbyterian Church (USA) in 1974.

"What I heard you [Cannon] say once haunts every poem that I write," Finney said. "Black people, you said, were the only people in the U.S. ever explicitly forbidden to become literate. I am now officially speechless."

The National Book Award website says the poems in Finney's "Head Off & Split" "sustain a sensitive and intense dialogue with emblematic figures and events in African-American life: from Civil Rights matriarch Rosa Parks, to former Secretary of State Condoleezza Rice, from a brazen girl strung out on lightning, to a terrified woman abandoned on a rooftop during Hurricane Katrina. Her poet's voice is defined by an intimacy, which holds a soft yet exacting-eye on the erotic, on uncanny political and family events ... Artful and intense, Finney's poems ask us to be mindful of what we fraction, fragment, cut off, dice, dishonor, or throw away, powerfully evoking both the lawless and the sublime."

University of Kentucky President Eli Capilouto also notes the power of Finney's work:  “Speaking of Nikky Finney, the author Walter Mosely wrote that ‘Poetry contains the magic of language, the ache of truth, and the possibility of entering a world where the rules play hide and seek with your sense of being. A poem, when it works, is a rolling realization of ideas and emotions that bring you somewhere you've never been with a sense of familiarity that opens up a whole new world right there in your mind.’ That so aptly describes Nikky Finney both as a poet and as a teacher. Her poems, carefully and finely honed words and passages strung together like beautiful pearls, combine common experiences, searing emotions and sometimes uncomfortable history to speak truth in uncommonly beautiful and resonant ways. Today, what students and her colleagues at UK have known for years, a nation now understands – the treasure that is Nikky Finney and her poetry, which reaches and touches us all.”

In an interview on the National Bood Award website Finney explains what she hopes readers take from her latest book of poetry.  "From this particular collection, I am hoping that the reader realizes we are standing at an incredible moment in time — a moment when so much of what we do and don't do matters," Finney said. "I believe more and more our beautiful language is being hi-jacked by those who care nothing about language, those who care only about winning and acquiring and stockpiling and protecting their own interests ... I believe our many beautiful ways of saying and communicating and the telling of our stories has been taken for granted and we can't let that happen. All of us who make something with our hands and hearts must step into every arena that we possibly can and bring with us the most eloquent, charged, radical (radical only means grabbing it by the root), tender, truthful words spilling from our arms. Our children deserve this from us."

To view YouTube video of Finney reading a poem from her book, click here.  Finney was recently interviewed for WUKY's weekly program "UK Perspectives."  You can hear the podcast of the interview here.

Finney, a Lexington resident, has taught at UK for decades and is a member of the Affrilachian Poets group that includes Frank X Walker and Kelly Norman Ellis.

When Finney was named a finalist for the National Book Award in October, Mark Lawrence Kornbluh, dean of the College of Arts & Sciences, noted Finney's contribution to UK's English department. "She is an asset to the university and has been a first-rate teacher and scholar throughout her career," Kornbluh said. "Her work is an exceptional source of inspiration for the community and will undoubtedly continue to inspire future generations."

The National Book Awards began in 1950, and for 61 years, a committee of writers has convened annually to judge the work of other writers and to recognize literary excellence.  National Book Awards are conferred in four genres: fiction, nonfiction, children's literature and poetry. Five finalists are named in each genre. For a list of all winners, visit the National Book Award website at http://www.nationalbook.org/.

Finney is the author of three previous volumes of poetry, "The World Is Round" (winner of the 2004 Benjamin Franklin Award for Poetry); "Rice" (winner of a PEN America Open Book Award in 1995); and "On Wings Made of Gauze" (1985). Recipient of the Kentucky Foundation for Women Artists Fellowship Award, Finney is also the author of "Heartwood," a collection of stories, and she edited "The Ringing Ear: Black Poets Lean South."