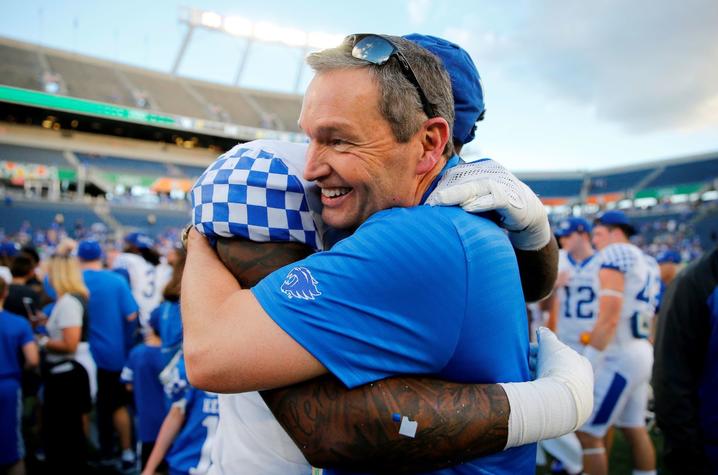 LEXINGTON, Ky. (May 24, 2019) — Mitch Barnhart prefers to operate behind the scenes, leaving the headlines and attention for the student-athletes and coaches who have helped bring to life his vision of establishing Kentucky among the best athletics departments in the country.

He can’t help but step into the spotlight for a moment now, as Barnhart has been named Athletic Director of the Year by the Sports Business Journal.

“I am honored and thankful to represent the University of Kentucky in receiving this award,” Barnhart said. “It’s truly a testament to the incredible work our student-athletes, coaches and staff have done to build a program to make the Big Blue Nation and the Commonwealth proud. I also want to say a special thank you to my wife, Connie, and my entire family for taking this journey with me. We have much work ahead of us though, and we can’t wait to do it.”

Barnhart was selected as Athletic Director of the Year from among five finalists at the 12th annual Sports Business Awards Wednesday evening at the New York Marriott Marquis at Times Square, based on the judging period of March 1, 2018, to Feb. 28, 2019. His fellow finalists were Ray Anderson (Arizona State University), Jennifer Cohen (University of Washington), Blake James (University of Miami) and Jamie Pollard (Iowa State University).

A finalist for the award for the second time — the first in 2015 — Barnhart is in his 17th year as University of Kentucky athletics director. The program has grown consistently during that time on the strength of Barnhart’s steady hand, sound fiscal management, and tireless focus on enriching the lives of student-athletes and creating memorable experiences for fans.

Centering the program on his core values of character, integrity, knowledge, stewardship and competitive greatness, Barnhart’s approach to supporting UK’s 22 teams is simple: set great expectations for success and provide resources to meet those expectations. He has done that by growing UK’s budget and creating revenues to match, with UK’s 2018-19 budget coming in at $147.7 million.

Along the way, UK has strategically invested in facilities. Over the last decade, UK has invested approximately $300 million in facility construction, renovation and improvement. Most recently, UK opened a new $49 million baseball stadium named Kentucky Proud Park, made possible in large part by an innovative multimedia rights agreement with JMI Sports. Next on the horizon is a renovation of Memorial Coliseum, for which UK secured approval to move forward with design earlier this year.

During the judging period for the award, this investment has yielded unprecedented results:

UK also continues to operate with a balanced budget while remaining one of the few self-sufficient athletics departments in the country, receiving no state or university funds. Barnhart is also a trailblazer in college athletics in his approach to partnership and support of UK’s academic mission. UK Athletics contributes millions annually on campus, including funding nearly two-thirds of the $100-plus million Jacobs Science Building.

“During Mitch Barnhart’s tenure as director of Athletics at the University of Kentucky, we have reached unprecedented levels of academic and competitive accomplishment,” said UK President Eli Capilouto. “This award recognizes his deep and compelling commitment to students and their personal success, and to the academic mission of the institution. You see that commitment in the program’s strong graduation rate and grade-point average. Several teams have competed for and won conference and national championships, along with individual titles and recognitions in virtually every sport. And UK Athletics’ financial investment in academic and need-based scholarships and in our instructional facilities is unmatched. At each step of the way, he built upon this momentum with respect and integrity. I know I speak for the entire UK family when I offer him our heartfelt congratulations on this well-deserved honor.”

Barnhart is ensuring UK Athletics can continue that support of UK’s academic mission with a strategic focus on fundraising through a new capital campaign — Kentucky Can — undertaken last fall. That campaign will also help UK push toward the goals set through Barnhart’s Elite 1-3-5 initiative:

The success of Wildcat student-athletes on the field and in the classroom is not enough for Barnhart. His goal is to equip UK’s 500-plus student-athletes to succeed for a lifetime and to become the next generation of leaders for the world. With that goal in mind, Barnhart established the new Student-Athlete Experience division last June.

The move has already borne fruit, with UK extending its streak of semesters with a cumulative grade-point average to 14 this spring and holding a career fair for student-athletes in February. Additionally, UK’s Student-Athlete Advisory Committee established a relationship with Special Olympics Kentucky in an effort to make the maximum impact on the organization.

Barnhart’s impact is also felt well beyond his university and the Commonwealth of Kentucky it represents; he is a leader on both the conference and national level of college athletics. As the longest-tenured athletics director in the Southeastern Conference, he is chair of SEC ADs. He also completed his third year as a member of the NCAA Division I Men’s Basketball Committee this spring.

In addition to his current duties, Barnhart has a history of national service. He has been a member of the NCAA Division I Council, the NCAA Division I Baseball Committee and chair of the NCAA Competition Oversight Committee. He played a key role in the beginning of the SEC Network, the most successful launch of a new cable channel in television history, while also working on the SEC Network Content Committee.

Barnhart’s leadership extends to mentoring the next generation of college athletics directors. His former lieutenants have gone on to become athletics directors at nationally prominent universities, including Greg Byrne of Alabama, Mark Coyle at Minnesota, Rob Mullens at Oregon, Scott Stricklin at Florida and John Cohen at Mississippi State. Earlier this year, Kevin Saal was named AD at Murray State after 12 years under Barnhart at Kentucky.