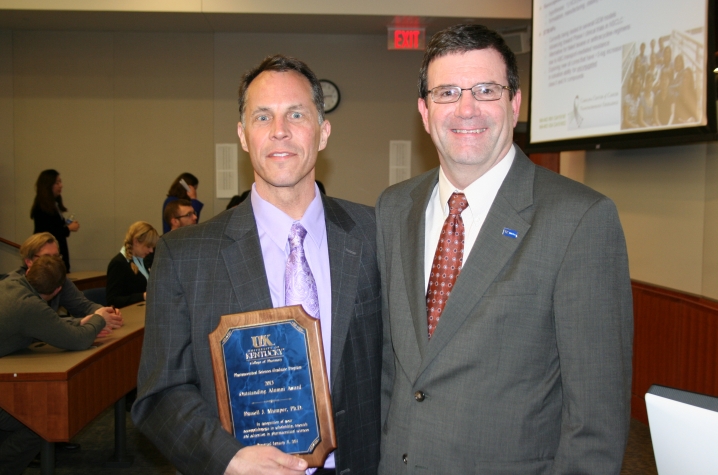 LEXINGTON, Ky. (Feb. 6, 2014) — The University of Kentucky College of Pharmacy has named alumnus and former faculty member Russell J. Mumper as its 2013 Outstanding Graduate Program Alumnus for the Pharmaceutical Sciences.

Mumper, who received a bachelor’s degree in chemistry at UK before earning his doctorate in pharmaceutical sciences, received his award as part of the college’s graduate program recruitment event.

“It was great to have Russ back on campus again,” said Timothy S. Tracy, Dean of the UK College of Pharmacy. “Russ’s story is a great example of what a UK College of Pharmacy education can do for you, and I am glad both our prospective students and current students had the opportunity to hear from such an accomplished pharmaceutical scientist.”

Mumper is vice dean of the University of North Carolina's Eshelman School of Pharmacy and the John A. McNeill Distinguished Professor in the school's Division of Molecular Pharmaceutics. From 1999 to 2007, Mumper was a faculty member in UK's Department of Pharmaceutical Sciences. He served as vice chair of the department from 2004 to 2007. Also, from 1999 to 2006, Mumper was associate director of the Center for Pharmaceutical Science and Technology.

He has received more than $10.2 million in research grants/contracts as principal investigator (and over $28.6 million total). Dr. Mumper has more than 295 scientific publications/abstracts and 45 patents or patents pending.

In 2007, Mumper was recognized by the University of Kentucky Alumni Association as one of six “Great Teachers” at UK. This award is the oldest, continuously given award for teaching on UK’s campus. In 2013, he received the Distinguished Teaching Award for Post-Baccalaureate Instruction, a campus-wide award at UNC-Chapel Hill.

He has been recognized for his scientific contributions to the profession as well. Mumper is an American Association of Pharmaceutical Scientists (AAPS) Fellow, and he is a past recipient of the AAPS Lipid-Based Drug Delivery Award sponsored by Gattefossé Corporation and AAPS.

He serves on the editorial board of three pharmaceutical journals and is an ad-hoc member of several scientific review panels for the National Institutes of Health. He continues to serve as a consultant to the industry and as an expert patent witness.

Mumper was the chair of the Bio-Targeting Working Group of the NCI Alliance for Nanotechnology in Cancer from 2010-2012 and is currently a member of the steering committee of the AAPS Nanotechnology Focus Group.