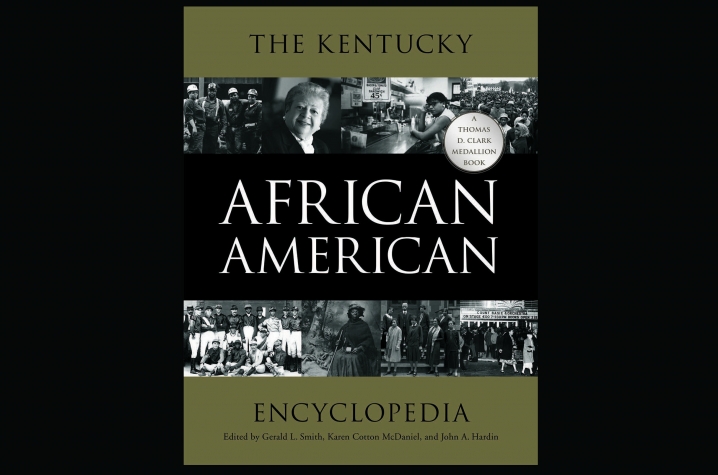 University Press of Kentucky authors Gerald L. Smith, Karen Cotton McDaniel and John A. Hardin have been awarded a 2016 Kentucky History Award given by the Kentucky Historical Society for their book, The Kentucky African American Encyclopedia.
To see Gerald L. Smith, the Martin Luther King Jr. Scholar in Residence and Theodore A. Hallam Professor at the UK Department of History, talk about his work on The Kentucky African American Encyclopedia, watch the video playlist above. Videos by UK Public Relations and Marketing.

LEXINGTON, Ky. (Nov. 23, 2016) — University Press of Kentucky (UPK) authors Gerald L. Smith, Karen Cotton McDaniel, and John A. Hardin have been named the recipients of a 2016 Kentucky History Award given by the Kentucky Historical Society (KHS) for their book, The Kentucky African American Encyclopedia.

The Kentucky History Awards recognize outstanding achievements by historians, public history professionals, volunteers, business and civic leaders, communities, and historical organizations throughout the Commonwealth. The awards were presented Nov. 11, at the KHS Annual Meeting and Kentucky History Celebration at the Old State Capitol in Frankfort.

Editors Gerald L. Smith, the Martin Luther King Jr. Scholar in Residence and Theodore A. Hallam Professor at the University of Kentucky Department of History; UK alumna Karen Cotton McDaniel, professor emeritus at Kentucky State University (KSU); and John A. Hardin, professor of history at Western Kentucky University (WKU), assembled a first-of-its-kind reference volume to create a foundational guide to the black experience in the Commonwealth. Capturing history from the earliest frontier years to the present, it chronicles the individuals, events, places, organizations, movements and institutions that have shaped the state.

Across the encyclopedia's remarkable accounts painstakingly detailed by more than 150 contributing authors, what is perhaps most impressive, is the breadth and scope of the history that is revealed. As the over 1,000 entries make clear, African-American Kentuckians have played pivotal roles in every facet of our state’s community as athletes, builders, coal miners, doctors, entrepreneurs, educators, lawyers, nurses, organizers, religious leaders and more. It reaches beyond the traditional narrative of Kentucky’s past to capture hidden and forgotten stories which deserve their place in Kentucky and American history. Even still, The Kentucky African American Encyclopedia makes clear that despite the rich history that has been documented, so much more remains to be told.

The Kentucky African American Encyclopedia is the fifth UPK publication in six years to win a KHS award, joining 2014 winner "Bloody Breathitt: Politics and Violence in the Appalachian South" by T.R.C. Hutton, 2013 winner "The Kentucky Derby: How the Run for the Roses Became America’s Premier Sporting Event" by UK alumnus James C. Nicholson, 2012 winner "A History of Education in Kentucky" by UK alumnus William E. Ellis, and 2011 winner "Lessons in Likeness: Portrait Painters in Kentucky and the Ohio River Valley, 1802-1920" by UK alumnus Estill Curtis Pennington.

Beyond the classroom at UK, Gerald L. Smith is the author, editor or co-editor of three books and other publications on history. He is also the pastor of Pilgrim Baptist Church in Lexington.

Karen Cotton McDaniel has more than 20 publications on black Kentuckians, including book chapters, articles and encyclopedic essays. She has also taught at Eastern Kentucky University and Berea College, in addition to KSU.

In addition to teaching at WKU, John A. Hardin is the author of two books, several major articles and numerous book reviews on Kentucky African-American history. He has taught at KSU and Eastern Washington University and has served as adjunct faculty at the University of Louisville and UK.