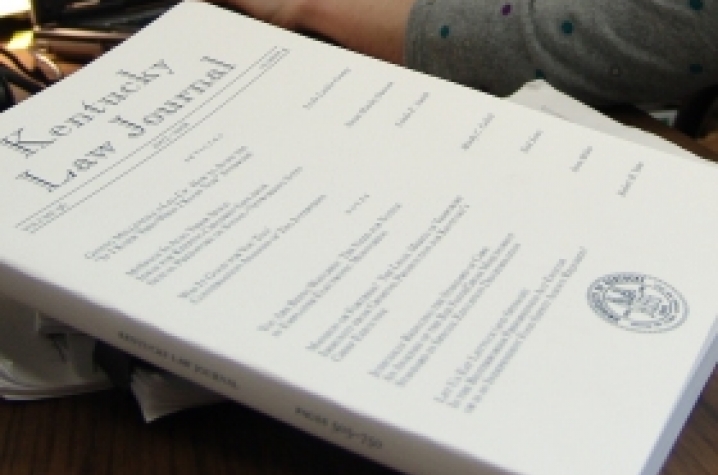 Articles and notes featured in volume 98, No. 2 are as follows:

In this article, Lawson, a UK professor of law, continues a series he has written about the Kentucky version of the "war on crime" that America has been waging for three decades and that has given it the distinction of having more people in prison and jail than any country on earth.   In earlier articles, he has written about how law and policy makers have toughened the state's laws on crimes for almost 40 years and how they have produced an inmate population that has filled the state's prisons and jails beyond capacities; he has raised questions about the fairness of existing punishments, about the conditions under which the state is incarcerating its inmates (especially the very large number serving long sentences in local jails), and about some of the most significant effects of these developments on the state's system of criminal justice. In this current article, Lawson writes about how the "war on drugs" has contributed to enormous growth in the state's inmate population and to very serious problems that now plague the state's criminal justice and corrections systems.

The U.S. Supreme Court has not created a clear Eighth Amendment standard to determine whether or not a capital defendant is competent to be executed. Justice Thomas best summarized the confusion in this area when he criticized the 2007 majority's opinion in Panetti v. Quarterman as "a half-baked holding." This article addresses one execution competency issue left open by the court: the question of to what extent a mentally ill capital defendant must understand the concept of death. In other words, to be competent to be executed, must a mentally ill defendant comprehend that execution means the end of one's physical life? This article considers the historical development of the ban on executing the insane, a ban with a murky history that has been passed down from medieval times and through Blackstone and English common law to modern day international law. Because of a long historical pedigree, the Supreme Court essentially accepted the ban as a constitutional given in 1986. This article examines the Supreme Court precedent regarding the ban, statutory definitions of competency, and the other court decisions that have begun to consider whether or not there should be a requirement that a mentally ill defendant can comprehend the end of life to be competent. Kirchmeier examines the policies behind the ban and uses them to conclude that the history and precedent require a death comprehension standard that is consistent with the historical underpinnings of the ban on executing the insane and that is consistent with Supreme Court precedent.

James Butler Cash Jr.: "When Is an Equity Participant Actually a Creditor? The Effects of In re AFI Holding on Ponzi Scheme Victims and the Good Faith Defense"

The recent discovery and subsequent fallout from the fraud perpetrated by Bernard L. Madoff has returned Ponzi schemes to the forefront of the investment community. The size of the deception is monumental by any standard. As the tally of victims in this fraud has climbed, attorneys for the aggrieved investors and news agencies alike have scrambled to find new wrinkles in Ponzi-scheme jurisprudence. Victims of Ponzi schemes need to be protected and afforded sufficient remedies under the law, yet the Bankruptcy Code's current fraudulent transfer statutes do not provide proper remedies for victims asserting the good faith defense where investors possess equity securities. In an effort to provide the needed protection, the Ninth Circuit Court of Appeals in In re AFI Holding, Inc. abrogated the value element of the good faith defense, morphing an equity interest into a creditor’s claim. This action risks creating a precedent of blurring bright line rules of the Bankruptcy Code when a particular outcome appears inequitable. Accordingly, this note argues that while the Bankruptcy Code and bankruptcy courts should provide equal remedies to similarly situated parties, they should not do so at the expense of ignoring clearly–termed statutory definitions.

As a greenhouse gas, and one of the leading contributors to global warming, carbon dioxide has recently dominated media headlines from Copenhagen to China. Dressman argues that if the world plans on averting further climate damage, we must reduce our carbon dioxide emissions – or prevent them from entering the atmosphere in the first place.