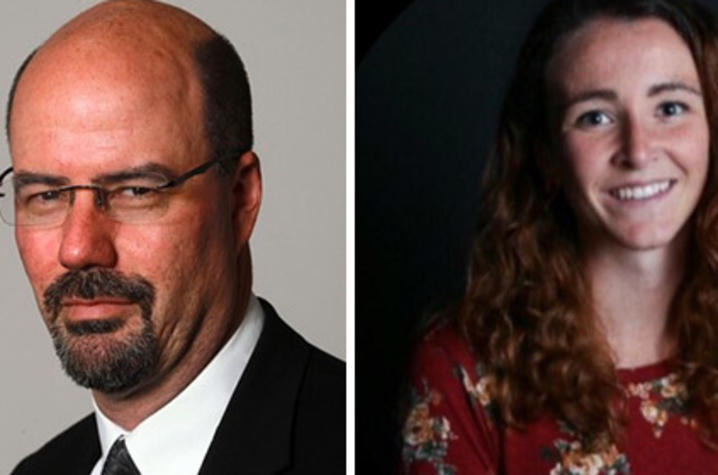 James Pilcher, investigative reporter at the Enquirer and journalist-in-residence at UK, and Sarah Brookbank, a Cincinnati Enquirer reporter and 2015 graduate of the UK School of Journalism and Media.

LEXINGTON, Ky. (April 18, 2018) — A University of Kentucky alumna and adjunct professor are part of a Pulitzer Prize-winning team for their work covering the heroin epidemic.

Sarah Brookbank, a Cincinnati Enquirer reporter and 2015 graduate of the UK School of Journalism and Media within the College of Communication and Information, and James Pilcher, investigative reporter at The Enquirer and journalist-in-residence at UK, both reported for the paper's “Seven Days of Heroin” project. UK alumna Nancy Daly, who graduated with a degree in journalism in 1982, also works on staff at The Enquirer.

Their team was awarded the coveted Pulitzer in the local reporting category, "for a riveting and insightful narrative and video documenting seven days of greater Cincinnati's heroin epidemic, revealing how the deadly addiction has ravaged families and communities."

“Winning a Pulitzer Prize is to a journalist what winning an Olympic gold medal is to an athlete,” said Mike Farrell, professor and interim director of the School of Journalism and Media. "To see Sarah and James honored for their roles reinforces our faith in our students and the training we can provide them."

More than 60 reporters, photographers and videographers went into Cincinnati and Northern Kentucky communities to explore the epidemic's impact and the personal stories of those affected. The piece chronicles just one week — July 10 through July 16 — but includes 18 deaths, nearly 200 overdoses, hundreds of heroin users in jail and 15 babies born with heroin-related medical issues.

Brookbank was a news and features editor at the Kentucky Kernel while attending UK and Pilcher teaches data journalism and investigative journalism at UK.

In a Kentucky Kernel story on the award, Pilcher spoke about UK's many connections to the Pulitzers.

“What is even better is that this was such a powerful story and on such a critical topic, a drug that is robbing families of loved ones," Farrell said. "The story reinforces our faith in the power and importance of journalism. And we are extremely proud that the wonderfully talented and accomplished Dana Canedy, a Pulitzer winner herself and one of our distinguished graduates, is the administrator of these coveted awards."

'UK at the Half': Meet the UK Football Players Pursuing Master’s Degrees in Business

'UK at the Half': Meet UK Vice President for Research Lisa Cassis