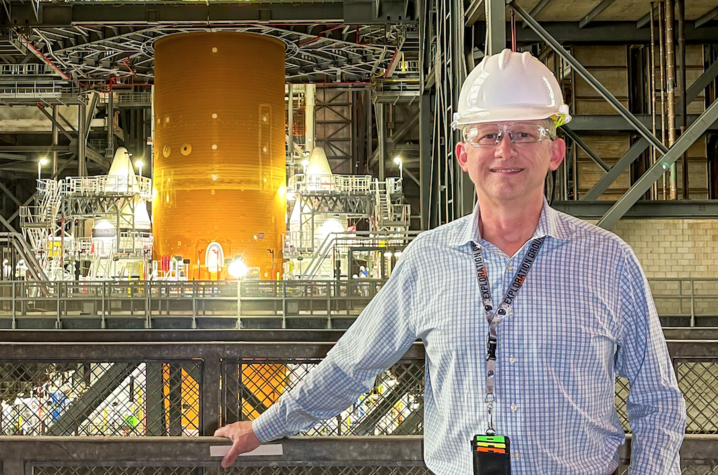 LEXINGTON, Ky. (Aug. 20, 2021) — Children are usually told to “shoot for the moon” when planning their future careers. For one University of Kentucky College of Communication and Information alumnus, he’s taking that advice literally — except he’s shooting for the moon AND Mars.

John Ramsey, a 1995 telecommunications graduate (now media arts and studies), has turned his childhood love of flying and human spaceflight into a profession supporting NASA. Since 2017, he has served as the senior project manager and integrated product team leader for the Spaceport Command and Control System at Kennedy Space Center.

But it wasn’t a straight road from Space Camp to the Spaceport. Though Ramsey had attended the U.S. Space and Rocket Center summer camp multiple times as a child, he started his career with the military.

As a telecommunications major, Ramsey aimed to learn the parameters of the communication industry, such as the technical side of systems, while also dabbling in the array of classes offered at UK. He said his degree afforded elective flexibility that allowed him to expand his horizons.

“I got this kind of rich mixture of different domains and different subject matter that was really interesting, and I didn’t realize at the time how well it would equip me for life later on,” Ramsey said. “The ability to explore my interests and to feed parts of my brain that I hadn’t or wouldn’t have otherwise tapped into gave me that Swiss Army knife set of capabilities to go out in the world and do some pretty diverse things.”

After graduating, Ramsey went on to serve as an infantry officer before putting in 15 years in the telecommunications industry. He worked his way up from frontline management to the executive director and global practice lead for Solutions Architecture at Verizon.

These years of career expertise made Ramsey a “valuable resource” for John Clark, associate professor in the School of Journalism and Media. Clark said Ramsey was an “engaging” and “diligent student” in his telecommunications network management class, and he would later return to the same class as a “guest expert speaker,” much to Clark’s appreciation.

While reaching a top position at a Fortune 50 company is the pinnacle for some people’s careers, this was the moment Ramsey bowed out for a coincidental opening of his dream job.

He had returned to Space Camp as a volunteer instead of a camper. While helping out the organization, he was appointed to the foundation board and helped to start the camp’s alumni association. This led to regular interaction with NASA and the contractor community. Through these connections, Ramsey learned that Jacobs, the prime contractor for ground systems supporting the human exploration program at Kennedy Space Center, was looking for a professional with his credentials.

Now he’s responsible for a team of over 200 software engineers and developers, system engineers, hardware engineers and more. As the senior project manager and integrated product team leader, Ramsey oversees the design, development, test and sustainment of the primary command and control system for processing and launch of the vehicles in NASA’s Artemis program. The program aims to take the first woman and next man to the moon and, eventually, Mars.

A previous coworker of Ramsey’s, Sandra Newfang, former senior manager for software delivery on the Test and Operations Support Contract at NASA’s Kennedy Space Center, said, “John's leadership was so critical to the success of Launch Control Systems at Kennedy Space Center, and I especially admired both how thoroughly he understood such a complicated system, and his sheer talent for strategy.”

Considering all the “cool things” Ramsey does in his role and the reality of living his childhood dream, there is one fact about his niche career that continues to amaze him even after four years on the job.

“I’m constantly standing in those rooms where people have worked so hard to allow people to leave Earth,” Ramsey said. “That’s what we say about Kennedy Space Center — it is the place where you come to watch people leave Earth.”