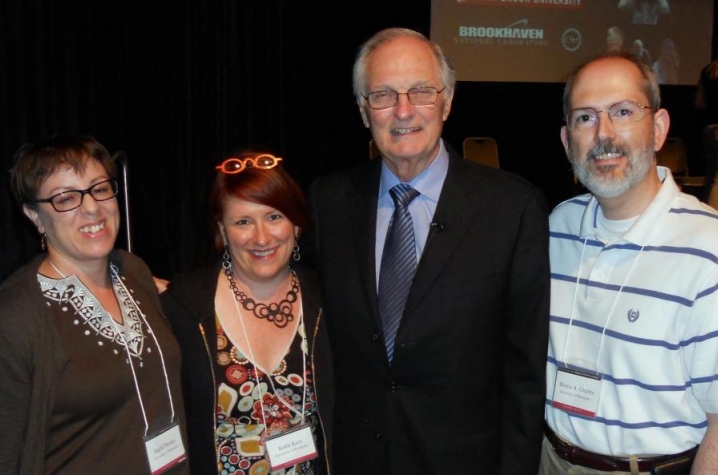 Assistant Professor of Electrical and Computer Engineering Ingrid St. Omer, Associate Professor of History and Director of the Center for the Enhancement of Teaching and Learning Kathi Kern, and Assistant Dean of The Graduate School Morris Grubbs were among 36 faculty and administrative leaders from around the country who attended the four-day institute, conducted by the Center for Communicating Science at Stony Brook University in New York.

The meeting, held June 5-9, was supported by funding from The Kavli Foundation and the U.S. Department of Education.

"Our participants were an impressive and diverse group from 20 states, full of valuable ideas and great enthusiasm,” said Elizabeth Bass, director of the Center for Communicating Science. "We’re excited at the prospect of continuing to work with them to share ideas and resources about how universities can make science more accessible to the public."

The Center for Communicating Science works to develop dynamic ways to help scientists speak and write about their work clearly and conversationally in ways non-scientists can understand.

Alda, a lifelong science lover, gave the conference’s keynote address, in which he recalled his years as host of the documentary series "Scientific American Frontiers," interviewing more than 700 scientists around the world. Many of them, he said, were brilliant researchers doing fascinating work, but they were unable to tell their stories in a compelling way.

Too often, he said, they reverted to “lecture mode,” rather than talking in a person-to-person, conversational way that engages the listener.  His desire to help scientists do better sparked the creation of the interdisciplinary Center for Communicating Science in 2009.

Attendees experienced training methods pioneered by the Center, including use of improvisational theater exercises to help scientists connect more directly with their audiences.

The purpose isn't to turn scientists into actors. The goal is to help scientists learn, through experience and practice, how to pay close attention to the needs and reactions of the people they are communicating with so they can adjust their message to be more effective.

"I came away thinking that this creative, interdisciplinary approach could be tailored to any field where researchers have to speak to multiple audiences," Kern said. "Sometimes the significance of what we do at a research university gets lost in the translation. This program offered a strategy and the tools to combat that."

In small, interactive workshops, participants also received training in “Distilling Your Message,” how to explain complex material to a non-specialist without “dumbing it down,” and they were videotaped being interviewed by professional journalists so they could practice interview skills. In addition, Howard Schneider, Dean of Stony Brook’s School of Journalism and co-chair of the Center’s steering committee, shared strategies for building similar programs on their own campuses.

“There are lots of reasons to do this kind of training,” Schneider said, “but the overriding reason is to boost scientific literacy at a time when our country is facing crucial public policy decisions on everything from climate change to investment in cancer research and space exploration.  At the same time, the public is increasingly bombarded with a flood of information and misinformation. So it's never been more important to train scientists to communicate clearly.”

UK faculty participants are already beginning to implement some of the principles learned and practiced at the institute.  "We've met with several UK faculty who are interested in designing workshops to help their graduate students present their research to wider audiences with greater impact," Grubbs said.

"Small changes in the way we communicate a subject we know well and are passionate about can sometimes make a huge difference in the way the message is treated and received," he said.  "Most graduate students realize how vital it is to communicate skillfully with public audiences, and they are eager to hone those skills."

The Center for Communicating Science has led training workshops for about 250 scientists and health professionals, as well as presentations for the National Institutes of Health, the Council of Graduate Schools and the World Science Festival in New York. In addition, the Center has developed for-credit courses in Communicating Science to the Public that are offered to graduate students in the sciences at Stony Brook University.