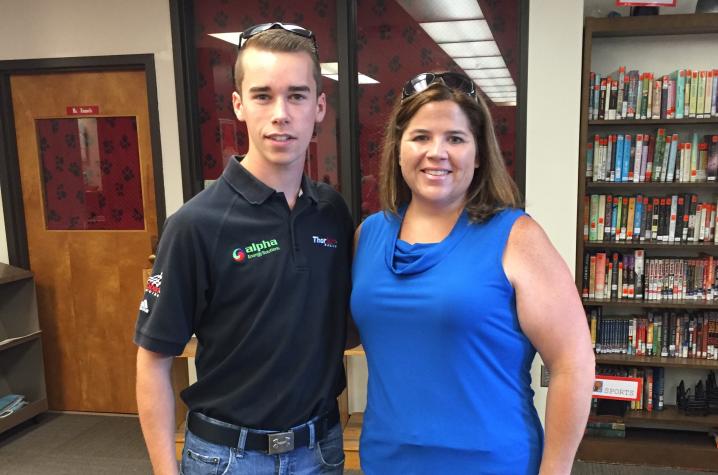 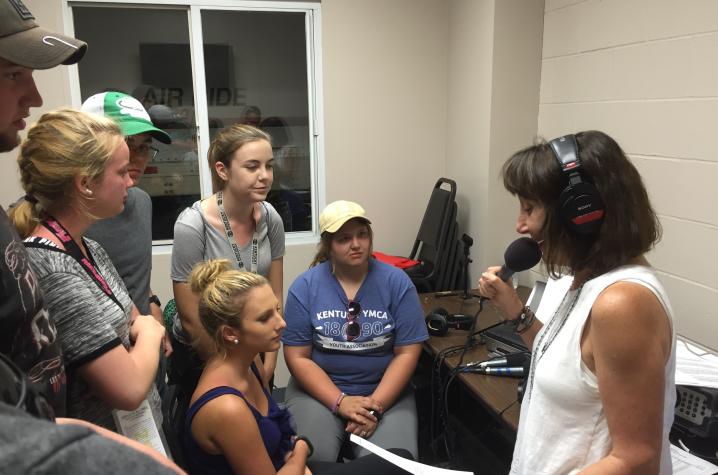 LEXINGTON, Ky. (Oct. 25, 2016) — Molly Fisher is a University of Kentucky College of Education professor with a passion for NASCAR racing. Her interests converge in classrooms when she delivers NASCAR-inspired lessons in science, technology, engineering and mathematics (collectively known as STEM).

For those who think of NASCAR as a “good ol’ boys” sport where men drive in circles around a track, STEM lessons based on racing may seem a stretch. Others may be especially perplexed by a female with a Ph.D. spending her weekends unabashedly cheering for her favorite NASCAR drivers. But things are not as incongruous as they may seem.

“The teams (including the driver) are constantly calculating, building, programming, and engineering in order to find the safest and fastest race car that will meet the required NASCAR specifications,” Fisher said. “The drivers are consistently the face of the NASCAR sport, but the rest of those teams are made up of engineers and scientists, many with graduate degrees in those fields. The team members behind the drivers deserve just as much credit as the drivers. My goal is to emphasize these ideas to children at an earlier age in efforts to get them interested and engaged in the STEM concepts embedded in this sport.”

Fisher grew up in North Carolina where she and her father watched races on Sunday, and would sometimes stop by NASCAR drivers’ local garages to say hello (a common practice at the time).

When Fisher was a graduate student at the University of North Carolina at Charlotte, Diandra Leslie-Pelecky, a physicist who has written a book on the science that makes cars win, approached her advisor (David Royster, who is now also on faculty at UK), about developing an education component related to the sport. Soon, she and Royster were delivering NASCAR-themed workshops for teachers in Charlotte, North Carolina, and have done a few in Kentucky.

At UK, Fisher recently connected with UK graduate student Kyle Curry, a former high school physics teacher. He got her involved in the Kentucky Speedway’s Racing to Excellence school program. She has worked to raise awareness of the program and helped judge this year’s STEM essay contest. The eight students selected as winners in the competition had the opportunity to gain hands-on experience as honorary pit crew members during the Kentucky Speedway’s NASCAR Camping World Truck Series race. Fisher attended the event with the high school students, where they spent the entire race day in the pits and garages with their designated teams.

Earlier this summer, Fisher was called upon by the Kentucky Speedway to conduct a camp session with driver Ben Rhodes, a NASCAR Camping World Truck Series driver, at Ludlow Middle School in Kenton County. There, they talked about safety, such as the Steal and Foam Energy Reduction (SAFER) barriers around the walls of tracks and head and neck support (HANS) devices attached to drivers’ helmets.

“The middle school students even got to build SAFER walls and crash model cars into them, measuring which walls absorbed the force of the car the best,” Fisher said. “What the students didn’t know at first was that part of the materials they were working with were actual pieces of a SAFER barrier that the Kentucky Speedway donated to my materials collection prior to the camp session.”

During the time Fisher has spent breaking barriers as a woman in STEM, females have also been making inroads with careers in NASCAR.

“I’d like to see an increase of women in this field and this is being helped by more women drivers, like Danica Patrick and Jennifer Jo Cobb, being introduced in the sport,” Fisher said. “During my time in the garage and pit areas at the speedway this summer, I had the opportunity to speak with several female engineers and race team directors that were involved in the building and engineering of the cars. As a female in STEM and a NASCAR fan, this is a promising step for women in the field, but I would like to see continuous increases of female involvement in the sport.”

Her next race-related involvement may originate from the UK campus. During the session at the middle school in Kenton County, Rhodes interviewed Fisher live for his Facebook followers. Kentucky Racing Group took notice. The group is comprised of student teams that build and race UK’s formula and solar cars. The students reached out to Fisher, and she hopes to collaborate with them on projects.