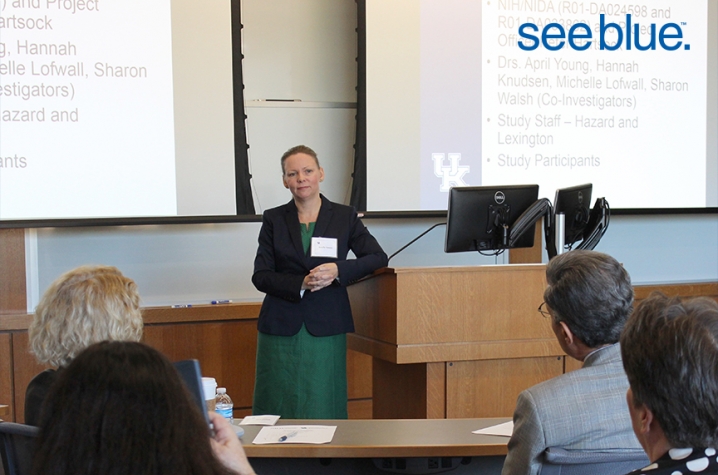 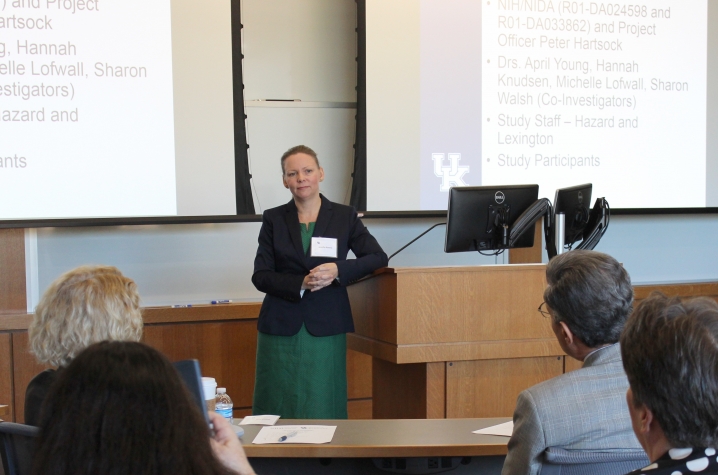 LEXINGTON, Ky. (Oct. 21, 2016) — With the rise in injection drug use, infectious disease has permeated through cohesive social networks in Appalachia, causing another dimension of devastation in the wake of the opioid epidemic.

About 15 years ago, a shift toward injection drug use behaviors occurred in rural Appalachia. These changes in drug use patterns signaled the potential for infiltration of blood-borne pathogens transmitted through shared needles. Increases in hepatitis C (HCV) infections have paralleled the increase in injection drug use behaviors among opioid users, with the rate of HCV infection in three Appalachian states tripling within six years.

With staggering rates of injection drug use and HCV in Appalachia, the National Institutes on Drug Abuse (NIDA) issued planning grants in 2016 to support researchers expediting and implementing solutions to the epidemic. Jennifer Havens, an epidemiologist in the University of Kentucky Center for Drug and Alcohol Research, was recently awarded two of the competitive planning grants to launch projects that will inform interventions and policies directed at opioid abuse across Appalachia. Havens has followed the simultaneous rise in injection drug use and HCV in Appalachia since 2004, accruing valuable data imperative for informing interventions and effective health policies.

In 2008, Havens embarked on a longitudinal study tracking injection drug use behaviors and infectious disease transmission in Eastern Kentucky. Havens, who was awarded funding for the project from NIDA, worked with a community-based research team to recruit more than 500 injection and non-injection opioid users and opened a storefront research site in Hazard, Kentucky.

The site enabled researchers to build rapport in the community and retain research participants through several years of observation and data collection. For the past eight years, Havens has accumulated data from the cohort regarding infectious disease prevalence and incidence, HCV risk factors, social networks, transmission behaviors and availability of preventive heath services. She has also monitored risk factors for HIV, a disease transmitted through unsafe sex and infected syringes that could have catastrophic consequences in small communities with tight social networks and little resources to combat the spread of the disease.

On each visit to the storefront site, participants partake in a questionnaire with local interviewers and also receive screenings for HCV, herpes simplex-2 virus (HSV-2) and HIV along with post-test counseling on preventive behaviors. Those participants who test positive for any infectious disease are referred to health resource centers in the community. Participants who test negative are given resources to prevent transmission.

To identify factors contributing to disease transmission, Havens and the study team analyzed social networks in rural communities, which unlike urban social networks, remain relatively stable over time and provide a firm basis for examining how disease transmits through communities. The researchers collected information about individual drug-use behavior, as well as the social linkages between members of drug-using networks.

This information allowed Havens, in collaboration with researchers in the UK College of Public Health, to visually map Appalachian drug-using networks and disease transmission with unprecedented specificity. She also assessed risk factors such as syringe sharing, years of injection drug use and history of incarceration as predictors of HCV infection.

“We actually have a very well-connected network, and unfortunately that can facilitate disease transmission,” Havens said. “When we look at the network over time, what we see is most of the people who were hepatitis C negative at baseline who end up seroconverting had a direct connection to someone who is hepatitis C positive at baseline. So again, it's just a powerful way to examine transmission graphically that you actually see versus just the underlying numbers.”

Havens found cohesive social networks in Appalachia facilitate HCV transmission among drug users. Participants testing negative for HCV at baseline, or at the time when they entered the study, were more likely to seroconvert, or show detectable antibodies of HCV in the blood, within one year of initiating injection drug use. Although cohesive social networks increase the population’s vulnerability to disease, Havens believes researchers can leverage the social connectivity to diffuse prevention information and interventions.

With a rich database of information, an intricate outline of drug use patterns, and long-standing relationship with the Hazard community, Havens is poised to undertake the next phase of research and HCV intervention. She has partnered with Research Triangle International (RTI) to combine existing sources of data and develop evidence-based recommendations for improving health services and policies across the Appalachian region.

Kentucky and North Carolina are states that have enacted policies targeting opioid abuse, such as naloxone distribution programs, the Good Samaritan Law for reporting drug overdose and syringe exchanges. In partnering with RTI, based in Raleigh, North Carolina, Havens will be involved in conducting a comprehensive examination of the opportunities to intervene in Appalachia.

Havens and Scott Novak of RTI are co-principal investigators on the project, which was awarded a one-year planning grant from NIDA. Responding to a call from NIDA to expedite research that informs action and policy to combat the opioid crisis, the researchers will study the effects of opioid-related interventions, services and policies in 13 states with Appalachian territory. The end-goal of the project is to develop a comprehensive database of opioid-related services, resources and policies specific to particular areas of Appalachia. The resource will inform future programs and policies directed toward opioid users.  The study also seeks to determine how differences in state-level policies may impact engagement in risk behaviors among opioid injectors in both Kentucky and North Carolina.

Havens received an additional NIDA planning grant to investigate the feasibility of providing engaging HCV-positive drug users in new direct-acting antiviral therapies to treat HCV in Appalachian populations. Research findings from the cohort study revealed that young drug users ages 18 to 25 have the highest rates of new HCV infection. The new treatments have been shown to have high cure rates, but treatment availability is limited in Appalachia. The second project is designed to assess whether Appalachian drug users are receptive to new HCV therapies and determine the most effective delivery models for disseminating the treatments.

“With health care reform, we have seen a dramatic increase in number of drug users who are now covered by Medicaid, which hopefully will go a long way in helping them to access substance abuse treatment as well as hepatitis C treatment,” Havens said. “The focus of the grant from here on out is to determine the barriers as well as the facilitators to accessing substance abuse and hepatitis C treatment among rural drug users.”