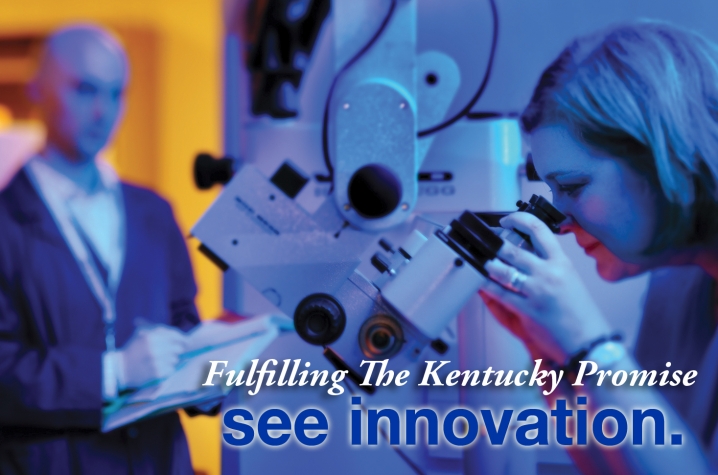 LEXINGTON, Ky. (July 9, 2013) — Through early support of promising investigators in fields ranging from lung cancer to Alzheimer's disease to pediatric heart disease, the University of Kentucky Center for Clinical and Translational Science (CCTS) has seen great return on their investment in recent years in the area of biomedical imaging at UK. The growth through investment ratio in this area has been great, with the return in federally-funded grants greatly multiplying the initial investment by the CCTS in the investigators' work.

In its first three years of funding by a federal Clinical and Translational Science Award (CTSA), the CCTS has invested $652,999 in support for young scientists interested in biomedical imaging.

To date, $4,821,948 in awards have been received by the same investigators to further their work - from funding sources including the National Institutes of Health, the National Science Foundation, and the Kentucky Lung Cancer Research Fund. This seven-fold return represents the transformative impact of early funding in investigators' careers, and growth through investment for the UK biomedical research enterprise as a whole.

Support from the CCTS includes cost sharing of salary and benefits of KL2 scholars with their colleges, as well as direct support for equipment, laboratory personnel, student workers, and other necessary costs. The "seed money" provided by early CCTS funding enables investigators to launch their research programs, improving their chances of earning competitive grant awards from agencies such as NIH and NSF - no easy feat even for the most seasoned investigators.

Noehren, a KL2 scholar whose research has broken new ground in magnetic resonance imaging (MRI), credits CCTS support for his ability to develop and test new unique pulse sequences to study muscle injuries, making UK one of only a few institutions in the U.S. to use MRIs in this research arena.

Fornwalt, who was awarded an NIH Director’s Early Independence Award last fall to study the effects of obesity on cardiovascular development in children, also noted that he is “extremely grateful for the financial support and mentoring I have received from the CCTS as a junior faculty member at UK - this support has enabled me to initiate my research program in cardiovascular imaging and focus on my laboratory's long-term goal of improving the lives of children with heart disease."

According to Tom Kelly, director of CCTS Training, Education and Mentoring, “support of these scholars and the MRI facility will enable further development of this cutting edge technology which is proving to be a powerful tool for clinical and research applications.”

The impact of funding from CCTS on investigators is significant, as is the impact of the funding on the state of healthcare, and even the regional economy. Funding from CCTS enables junior investigators to launch their careers with strong momentum. In a larger sense, it furthers UK's mission to bring research from the lab bench to the health care bedside as quickly and carefully as possible. Finally, the support provided by CCTS, and the resultant larger competitive research awards, enables the many people who work in laboratory and support roles in funded labs to continue their work in a useful and productive field.

Dr. Philip Kern, CCTS director, cites working with junior investigators as critical to the future of clinical research:  “It is exciting to support junior faculty with new ideas in imaging research to transform the outlook for conditions such as Alzheimer’s disease, childhood heart disease, and knee injuries, ” said Kern.

For more information on the CCTS, watch the video below: