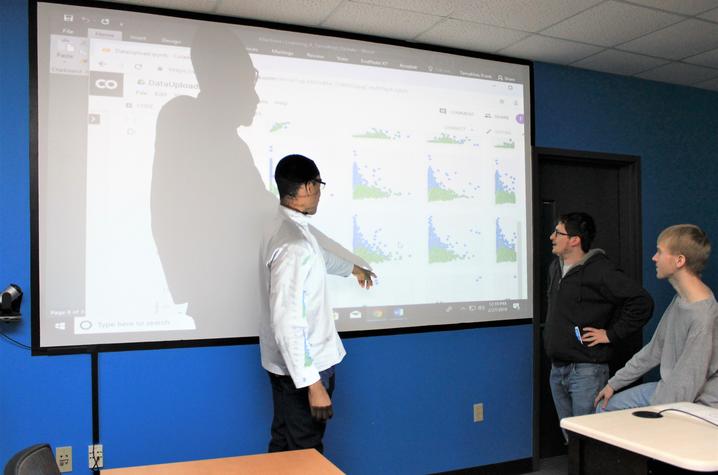 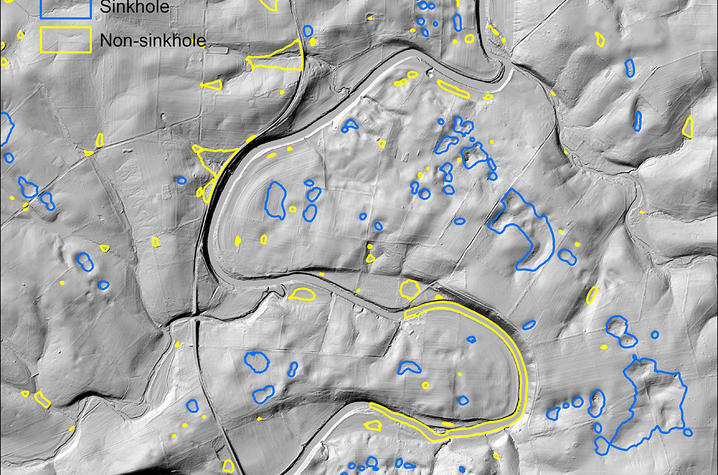 LEXINGTON, Ky. (March 11, 2019) — Kentucky is famous not only for having the world’s longest cave system (Mammoth Cave), but also for another geologic occurrence: sinkholes. Some sinkholes are dramatic, such as the one that occurred inside the Corvette Museum in 2014. They can cause property damage and pose a threat to human safety.

Since 2015, Junfeng Zhu, a hydrogeologist with the Kentucky Geological Survey, a research center within the University of Kentucky, has been investigating the use of machine learning to identify Kentucky sinkholes in aerial LiDAR (light detection and ranging) data. Machine learning uses an array of tools that help a computer learn and improve its abilities at a task without being programmed specifically for the task.

“I started using a tool called ‘random forests,’ one of the many machine-learning algorithms, to recognize sinkholes,” Zhu said. “I found that method to be promising, but the accuracy was not satisfactory.”

Zhu discussed improving the accuracy with non-geologist researchers at UK and elsewhere. In 2017, he and Nathan Jacobs, an associate professor in computer science at UK, began working to implement and evaluate different machine-learning methods. They decided to provide LiDAR data from four central Kentucky counties to students in Jacobs’ Fall 2018 machine-learning class. The students were challenged to use any machine-learning tools to accurately identify sinkholes.

“For some of the earlier assignments in the course, I used simulated datasets,” Jacobs said. “Although that’s useful, because I can control the difficulty of the learning task, using real-world data helps students better understand the mathematical foundations.”

UK physics major Grant Forbes was among the students who completed the assignment.

“I liked that the assignment was goal-oriented," Forbes said. "It gave us the freedom to try out our own creative approaches. I saw it as liberating and neat. Those are the two words I would use!”

Jacobs also made the assignment a competition, letting students post their results on a website that ranked the results. The students were allowed to make multiple submissions if they could achieve better results using a different method.

Frank Tamakloe, who studies geology in the UK Department of Earth and Environmental Sciences, also took the class.

“I was completely new to machine learning, and it was a really nice experience to learn with real-world data," Tamakloe said. "I thought the competition was a nice idea too. We were competing, refreshing the leaderboard, and I was seeing if I can move up the leaderboard."

“Machine learning can be applied to just about anything with data, and everyone is collecting data now,” said Jarrett Brunes, a computer science senior. “There’s a ton of training sets available to help people learn how to do these specific things, and it’s good for learning. What was nice about this particular dataset and problem is that it’s something KGS has actually worked on and it was very close to home. That made it a lot more interesting and engaging.”

Zhu believes machine learning provides a new way to approach groundwater problems that have been difficult to solve with commonly used methods.

“What I hoped was that the students could come up with better results than I did, and I think this was likely the case,” Zhu said.

Jacobs, meanwhile, plans to use such real-world assignments again when he teaches the course again in Fall 2019.

“Assignments like this help computer science students see what their role could be in the ongoing transition that computer science, and machine learning in particular, are creating in many disciplines,” Jacobs said.