LEXINGTON, Ky. (April 3, 2019) — Alzheimer's disease wreaks emotional havoc on patients, who are robbed of their memories, their dignity, and their lives.  It’s financially devastating as well: care for Alzheimer's patients is predicted to top $1 trillion by about the time children born today are having children of their own.

To date, there have been very few successes in the pursuit of a treatment. But one drug that looks at Alzheimer's Disease (AD) from a different angle is now ready for its first round of testing in humans.

The vast majority of Alzheimer's treatments currently FDA-approved or in the pipeline target amyloid, which is responsible for the hallmark plaques that interfere with cognition. As the so-called "Amyloid Theory" has produced one drug failure after another, scientists have begun to explore other therapeutic avenues. Linda Van Eldik, director of the Sanders-Brown Center on Aging at the University of Kentucky, has set her sights on an understudied, but in her view, more promising target: brain inflammation.

"Inflammation is normally a 'good guy.' It clears infections and helps heal wounds, for example," said Van Eldik. "But in Alzheimer's disease, the inflammation somehow gets out of whack. It gets too strong and sustains for too long — it's now turned into a 'bad guy,' destroying the neurons that carry signals from one part of the brain to the next."

Van Eldik began collaborating with Martin Watterson at Northwestern University to identify a drug that would block the "bad" inflammation in the brain without affecting the "good" inflammation that helps jumpstart repair.

After years of research, Van Eldik is ready to test this drug — enigmatically named MW-151 — in humans. Both the National Institutes of Health and the Alzheimer's Drug Discovery Foundation are sufficiently intrigued that they've bet a combined $5.5 million to underwrite her efforts.

This is quite an accomplishment: current estimates say that for every 5,000 to 10,000 compounds that enter the drug discovery process, only five will go into a human clinical trial.

Even if MW-151 beats the considerable odds that confront every potential new drug, it's years away from being available to the public. If the drug ultimately proves safe and effective, Van Eldik believes that MW-151 will function as a once-daily pill that staves off dementia, much like a baby aspirin prescribed to prevent heart attack or stroke.

That could be a game-changer in the fight against AD. According to the Alzheimer's Association, delaying the onset of dementia by just five years would cut the incidence almost in half, which translates to enormous financial and emotional savings for patients and their families.

Van Eldik does not consider MW-151 a silver bullet, however.

"This is a very complex disease " she cautions. "A single approach — even our approach against inflammation — may not be enough."

"I think this drug it will be most effective as part of a 'cocktail' of drugs that target multiple mechanisms of the disease. If that worked out, boy, that would be a slam dunk."

The Sanders-Brown Center on Aging was founded at the University of Kentucky in 1972, quickly establishing itself as a national leader in efforts to improve the quality of life for the elderly through research and education.

Sanders-Brown has played an instrumental role in several landmark breakthroughs related to Alzheimer's and other dementias, including the discovery that there are changes in the brain decades before there are outward symptoms of the disease. 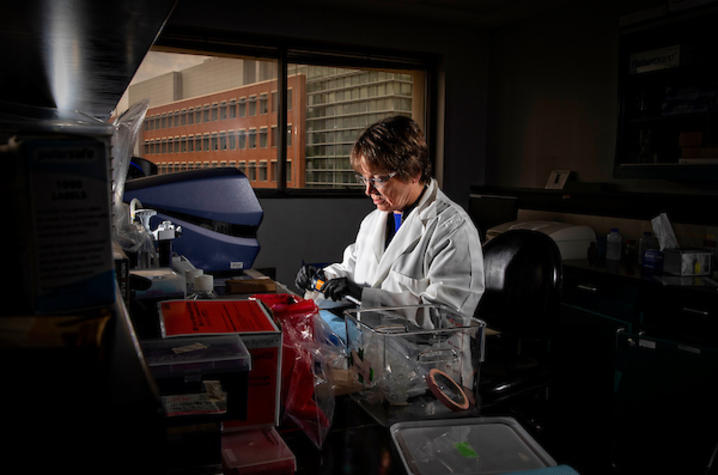 Linda Van Eldik in her lab. The Sanders-Brown Center on Aging director has developed a drug that is ready for its first round of testing in humans. UK Photo | Mark Cornelison