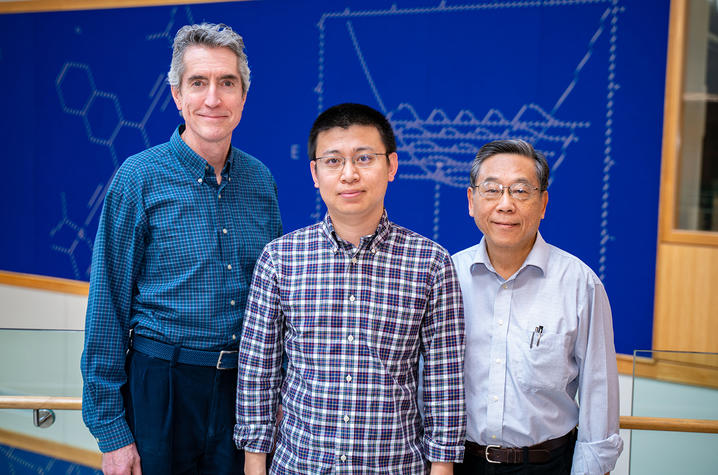 (Left to right:) Terry Draper, Jiang Liang and Keh-Fei Liu. These researchers from the UK Department of Physics and Astronomy have discovered that a proton's mass is made up of more than just quarks. Photo by Ben Corwin | UK Research Communications.

LEXINGTON, Ky. (April 2, 2019) — A team of researchers from the University of Kentucky College of Arts and Sciences Department of Physics and Astronomy has made a discovery that has changed the "elementary textbook" description of protons.

Professors Keh-Fei Liu and Terrence Draper, along with postdoctoral scholar Jian Liang, are co-authors of a study titled "Proton Mass Decomposition from the QCD Energy Momentum Tensor" that was published this past fall in Physical Review Letters. Since then, the study has gained national attention in the world of physics, as its results have opened doors for more calculations and theoretical understanding.

The team recently explained to UKNow exactly what they learned and what it means for their scientific community.

UKNow: Protons are made up of quarks, but according to your study, there's more to it than that. What else accounts for the mass of a proton?

Liu: The proton is not made of just three quarks as described in elementary textbooks. Besides quarks, the proton is also comprised of gluons which hold the quarks together in the proton. In addition to quark mass, quark energy due to the gluons' motions and interactions also contribute to the proton mass.

Liang: A gluon is something like glue that binds quarks (and also the gluons themselves) together. All the quarks and gluons are moving very rapidly inside the proton (close to the speed of light), so their energies also contribute to the total proton mass.

Liu: Furthermore, gluon field energy and a quantum anomaly, which does not have a classical analog, also contribute to the proton mass.

UKNow: What exactly is QCD theory?

Liu: Quantum chromodynamics (QCD) is the fundamental theory of the strong interaction of quarks and gluons. It is analogous to quantum electrodynamics (QED), except there are three color charges instead of one electric charge as for the electron and proton in QED.

Liang: We sometimes say that a quark can have three kinds of colors (red, green or blue) but these are not actual colors that we can see. QCD describes how the different "colored" quarks and gluons interact with each other and how they constitute the nucleons.

Liu: In addition, quarks in QCD have different flavors, called up, down, strange, charm, bottom and top.

Draper: The self-interaction between the gluons makes QCD much more complicated to calculate theoretically. One needs large computer simulations to do the job.

Draper: Because of the interaction of the gluons, QCD can be solved by the analytic methods used for QED only when, for example, protons collide at very high energy, such as in particle accelerators. But to determine the properties, such as mass, of a proton at rest, the analytic methods are mathematically intractable. Lattice QCD provides an alternative approach. At the theoretical cost of approximating the continuum of space-time with a grid, or lattice, the number of variables is made finite, and thus the theory is amenable to numerical computation. The tradeoff is that the numerical estimates of physical quantities, such as the proton’s mass, have statistical errors and systematic errors such as those due to finite lattice spacing and volume. Both errors can be reduced to acceptable levels with the expenditure of very large amounts of computer time applied with clever algorithms.

Liang: One reliable way to tackle these kinds of errors is to use supercomputers to “simulate” the strong interaction with the continuous space-time replaced by a discrete lattice. This is what we call lattice QCD.

UKNow: How does this study impact future research in nuclear physics? What other types of studies can now be done as a result of having this information?

Liu:  To find out the origin of the proton mass experimentally is one the primary goals of the upcoming electron-ion collider. This work has opened the door for more numerical calculations and theoretical understanding of nucleon structure, including the spin decomposition of the proton in terms of quark spin, quark orbital angular and glue angular momentum, whose measurement is also a leading goal of the electron-ion collider.

Draper: Our team has also made the first complete lattice QCD calculation of the proton’s spin decomposition.

UKNow: What is the most exciting part of this discovery?

Liang: I think the most exciting part is to find out what gives mass to our visible universe. As you might know, the Higgs mechanism gives mass to the elementary particles like quarks and leptons. However, the quark mass contributes less than 10 percent of the total proton mass. Where does the remaining 90 percent come from? This study answered this question quantitatively.

UKNow: Who funded this research?