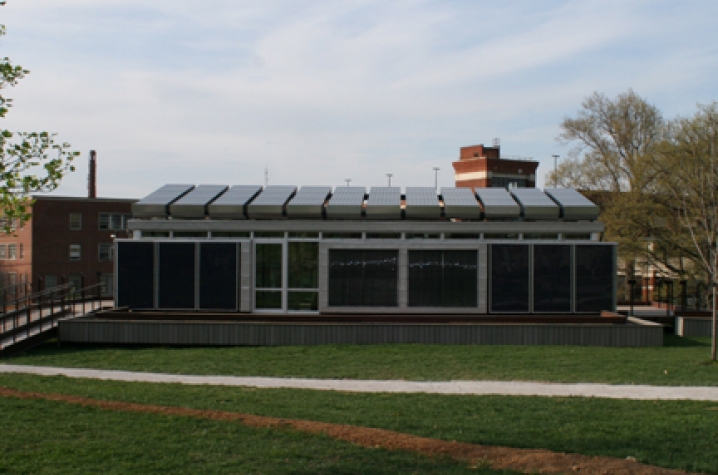 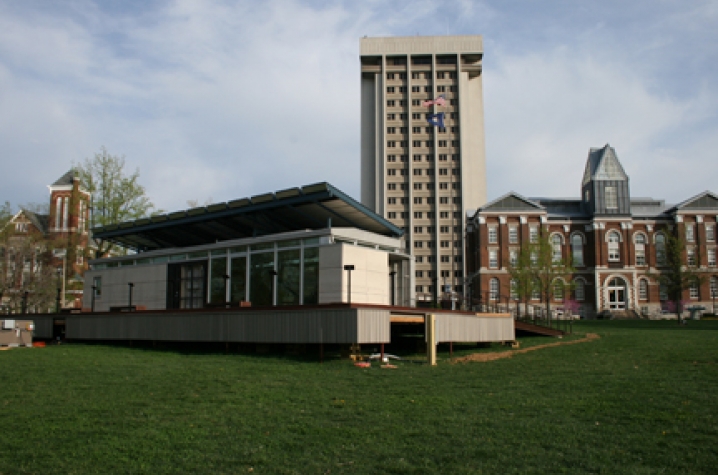 LEXINGTON, Ky. (April 9, 2010) - When Jeffrey Kellow arrived at the Solar Decathlon in Washington, D.C. last fall, he and his teammates got busy installing the University of Kentucky’s entry into the U.S. Department of Energy 2009 Solar Decathlon. Then, he looked up one day, and it hit him.

"When we were there and we were building, we would get trapped in our own world sometimes," said Kellow, a graduate student in the UK College of Agriculture’s Department of Biosystems and Agricultural Engineering who has worked on the house project since he was an undergraduate. "Then, I’d look up and see a national monument – the Washington Monument on one end; the U.S. Capitol on the other end – and that’s when I just really realized where I was and put it all in perspective."

At the 2009 Solar Decathlon, the S•KY BLUE House placed ninth out of 20 entries from around the world. Team members said it was an excellent showing by a first-time competing team, and they also learned a lot about how to compete in the event. The competition proved that the S•KY BLUE House could serve as an inspiring proof-of-concept demonstration project that could integrate leading-edge research, and ultimately show the Commonwealth of Kentucky that net-zero solar living is possible in Kentucky.

After the competition, team leaders Don Colliver, a professor in the UK College of Agriculture Department of Biosystems and Agricultural Engineering and Gregory Luhan, associate dean for research in the UK College of Design worked with UK administrators to locate a place on campus where the house could be on display so that students, faculty and staff could learn more about the house and its unique, energy-saving features, while the team conducted their energy and design research.

The ultimate decision was to place the house on the Main Building’s lawn until August before the house moves to the Kentucky Horse Park and serves as the visitor’s center for the City of Lexington at the Alltech FEI World Equestrian Games.

"One of the keys with this house is that it’s a teaching tool," Colliver said. "I think being on the Main Building lawn … it’s a very high-traffic, visible place that allows us to show people what the house is all about."

Solar Decathlon team members sometimes take potential students on a tour of the house as part of their campus visit. The solar house is a natural recruiting tool for the UK colleges involved with the project because it allows potential students to see education working in real life with tangible results.

"We designed and constructed the house with continued research in mind; thus, we have capabilities to continue measuring quantities and adjusting systems to find new discoveries," Kellow said. "It is a great venue to show future students the kinds of projects they could work on at UK. They can see that advances in energy generating and energy saving devices are being achieved through research in Kentucky."

Public tours of the S•KY BLUE House are available 10 a.m. to noon Mondays, through April 26.

Colliver said one of the goals going into the competition was building technical capacity in that students, faculty and industry partners could work together to build a viable solar home.

"We also wanted to prove we could build a net-zero house that people would want to live in," Colliver added. "And, we did all of those things. We know that solar can work in Kentucky, so it’ll be interesting to see where we go from here to see the projects that stem from this."

In the Solar Decathlon, the UK solar house finished second in the people’s choice category. Luhan said that was one of the most pleasing parts of the competition because it proved the team had built something that visitors found aesthetically pleasing.

"When you’re dealing with such a small space – 800 square-feet (outside), 540 square-feet (inside)– the challenge becomes how to make a small space as efficient as possible, while at the same time, making the space feel much larger, than it really is," he said. "Following our design mantra of 'By Kentucky, For the World,' we sought out existing solutions from the Commonwealth that maximize space – including Shaker concepts for custom-crafted chairs that can hang on the wall as art pieces when you’re not using them, a dining table that pockets into the wall and slides out to seat eight people or serve as additional kitchen workspace – and when you finish your meal, you slide it back into the wall, and then like the Shakers, you have room to dance."

Luhan said the most rewarding part of the project has been seeing the students’ reactions to the decathlon experience.

"We did a great job numerically speaking in terms of our top-10 overall placing," he said. "But more than that, it was my distinct pleasure to work hands-on with the students to apply forward-thinking research objectives, and then watch as they learned to make their own realizations that was the real reward. At the end of the day, what we constructed was more than a house. It was a three-dimensional textbook, an active living and learning laboratory that embodies leading-edge concepts developed at UK. For the students and faculty alike it was an opportunity of a lifetime. As we continue to test and validate our ideas and assumptions on the Main lawn, the team is actively applying their design knowledge to the next set of projects aimed specifically at improving the lives of Kentuckians."

Luhan said the next challenge for his students is to help design market-rate homes that can be built for $100,000 and operate on a dollar a day.

"The solar house was clearly the 'rubber that hit the road' for over 175 students to develop not only critical building skills but also offer them direction and insight for integrating high-performance technology and cost-efficiency with design that will ultimately result in solutions for future projects," he added.

Since the S•KY BLUE House has been on the Main Building lawn, more than 1,000 people have toured it, including public and home school groups, current and potential college students, administrators and researchers.

"These people are seeing the result of a tremendous amount of research, which is still going on not only on the house, but around it," Colliver said. "Some of the concepts and methods of communicating that information are on display, and we’ve harnessed knowledge we gained from competition and couched it into what I’d call impact to the Commonwealth."

UK's S•KY BLUE solar house team was an interdisciplinary group comprised of students, faculty and staff from six colleges and 16 centers and departments within UK. The team was led by principal investigators, Colliver and Luhan,  as well as faculty from the College of Communications and Information Studies and College of Engineering.

For information about tours or the house in general, visit the solar house Web site at http://www.uky.edu/solarhouse.