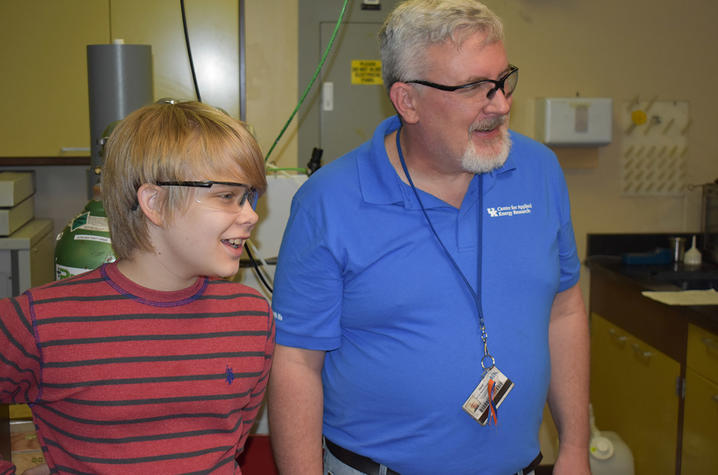 Eaton, an Owensboro, Kentucky, native who earned his doctoral degree in chemistry from the University of Kentucky Department of Chemistry, is the consummate, professional researcher. Carbon is his game, and the UK Center for Applied Energy Research’s (CAER) laboratories is his home away from home. Whether he is working on carbon fiber, carbon nanotubes, activated carbon or energy storage applications, Eaton is constantly pushing the boundaries of discovery.

Despite a hectic research schedule, Eaton always finds time for one particular passion — mentorship. Having worked for out-of-state industry for many years, he was eager to return to his home state to continue his career. He also was attracted by another opportunity provided by UK CAER — the chance to inspire and motivate the next generation of Kentucky scientists.

“I’ve always enjoyed showing young people how science applies to their lives each and every day,” Eaton said. “That’s a great aspect of working here at UK. Not only do we get a chance to take part in really interesting projects, we get a chance to explain what we do to that next generation of scientists.”

Sometimes those are UK undergraduate and graduate students. But this year, Eaton had a chance to share in the unique education journey of Todd Prater. Prater is the 12-year-old son of Jeff and Cecilia Prater of Hueysville, Kentucky. A student at Duff-Allen Central Elementary School in Floyd County, Prater is very active in his school community. He is a member of STLP (Student Technology Leadership Program), band, choir and the academic team.

Prater was recognized by the Kentucky Association for Gifted Education (KAGE) as the 2018 Distinguished Student of the Year for his leadership in community service.

More than anything, Prater is curious. When Shiela Medina, assistant director for policy and engagement at UK CAER first met him, she noticed that “scientific itch” that is evident in all young investigators. After talking with Prater, she knew who the right mentor would be.

And Eaton and Prater hit it off immediately.

“It was like they knew each other for years,” Medina said. “Two different generations from opposites ends of Kentucky connected by science.”

Eaton spent some time with Prater this past spring, introducing him to one of the center’s most sought after projects: turning coal byproducts into carbon fiber.

That mentorship opportunity inspired Prater to create a multimedia project about the production and potential use of coal based carbon fiber. He entered his project into the 2018 CEDAR (Coal Education Development and Resources) Coal Fair. Prater’s entry placed first in the technology multimedia category in the middle school division and was one of top three projects at the Coal Fair out of more than a hundred projects in grades K-12.

But, as his mother noted, that award was not the most cherished prize.

“The team at UK CAER have embraced Todd and myself from the very moment we stepped foot on campus,” said Cecilia Prater, a Floyd County educator. “They have taken the extra step to get to know us and to help explain complex science in a clear and concise manner. We consider them family now.”