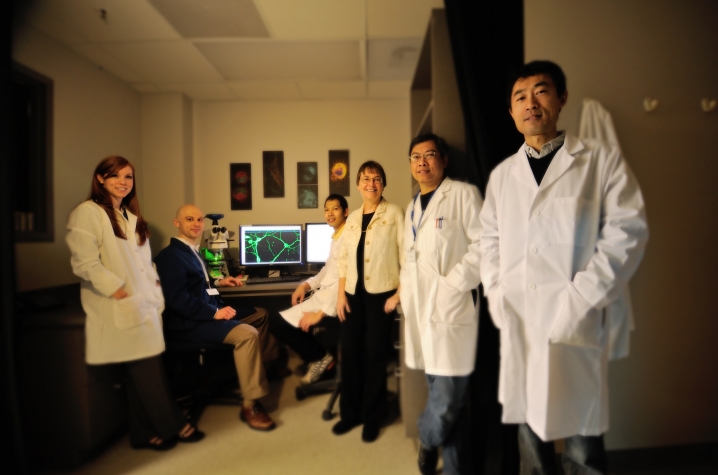 LEXINGTON, Ky. (July 25, 2012) — In a study published in the Journal of Neuroscience, a collaborative team of researchers led by Linda J. Van Eldik, director of the University of Kentucky Sanders-Brown Center on Aging, and D. Martin Watterson of the Northwestern University Feinberg School of Medicine, present results showing that a new central nervous system drug compound can reduce Alzheimer’s pathology in a mouse model of the disease.

The drug, called MW-151, is a selective suppressor of brain inflammation and overproduction of proinflammatory molecules from glial cells. The drug can be taken by mouth and readily enters the brain. The new study tested the hypothesis that intervention with drugs like MW-151 could be effective as a preventive measure, when administered at an early stage before Alzheimer's pathology appears, as well as after disease symptoms have begun to appear.

"Early intervention with MW-151 in an Alzheimer's mouse model reduced the glial activation and proinflammatory cytokine overproduction, which resulted in improvement in neurologic outcomes," said Van Eldik. "The neurological outcomes included protection against the loss of critical nerve cell proteins and functional damage associated with learning and memory impairments."

In addition, the drug showed efficacy either before or after Alzheimer's disease was apparent, but was more effective when it was given before the disease was too far advanced, said Van Eldik. "The data support the hypothesis that selectively attenuating certain aspects of dysregulated brain inflammation is beneficial, especially when used early in the disease progression," she said.  "The outcomes suggest that therapeutic strategies targeting this pathological process have the potential to attenuate disease onset and progression."

In other words, administering the drug MW-151 early in the progression of Alzheimer's disease in an animal model resulted in improved outcomes, suggesting that administration of this drug before Alzheimer's symptoms are readily apparent may be a promising therapeutic strategy.

Alzheimer’s disease is the sixth-leading cause of death in the United States, yet it is the only disease among the top 10 killers without a way to prevent, cure or slow its progression. The disease kills more people than diabetes, as well as more people than breast cancer and prostate cancer combined. The recent National Alzheimer’s Project Act clearly defines the rapidly growing nature of the problem and is the foundation for an evolving national plan to address this critical health and economic crisis.  Part of the national effort is to test explicit hypotheses about new disease modifying therapeutic strategies.

Alzheimer's disease is a progressive disease that slowly destroys brain function, leading to memory impairments, difficulties with language and decision-making and eventually the inability to engage in normal activities of daily living and self care. The root causes of Alzheimer's are not understood. However, a rapidly growing body of experimental data and clinical observations on patients raise the possibility that unregulated brain inflammation, termed neuroinflammation, is a factor in susceptibility of disease onset and a contributor to disease progression.

Regardless of neuroinflammation’s exact role, a prevailing hypothesis is that targeting of proinflammatory cytokine overproduction in the brain might be a useful therapeutic strategy to add to the armamentarium of emerging interventions. The primary brain cell target for such a disease modifying strategy would be glia, cells in the brain that produce proinflammatory cytokines and other innate immunity responses to injury or disease progression.  Glial cells normally cooperate with the nerve cells to keep the brain operating smoothly.  When an injury or change in the brain occurs, the glial cells mount a beneficial inflammation response to fight off the insult and restore the brain to its proper functioning. This beneficial process sometimes gets out of balance and the inflammation becomes too strong or does not shut off on schedule.

In AD, glial cells are over-activated and produce detrimental inflammatory molecules, which include the small proteins called proinflammatory cytokines, that contribute to nerve cell dysfunction or death. Drugs that selectively target cytokine up-regulation in glia are logical first attempts at this therapeutic strategy.