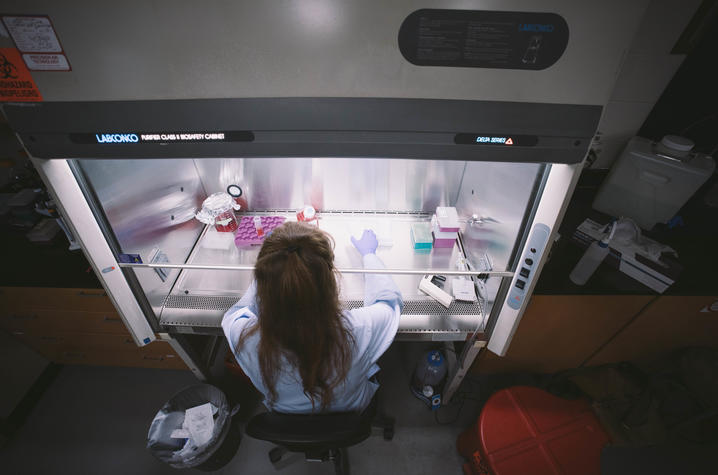 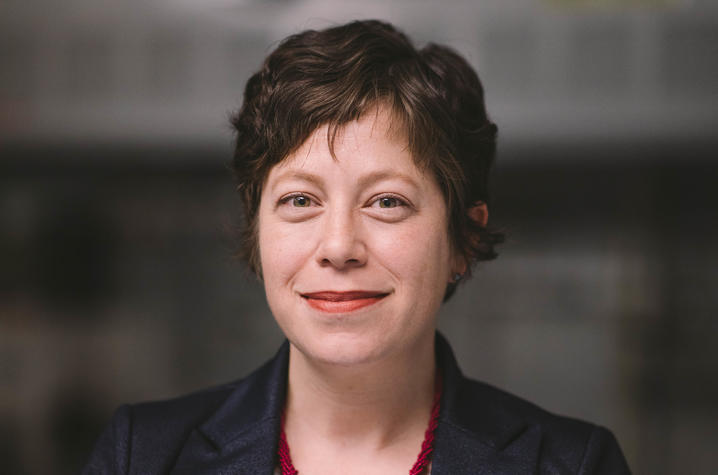 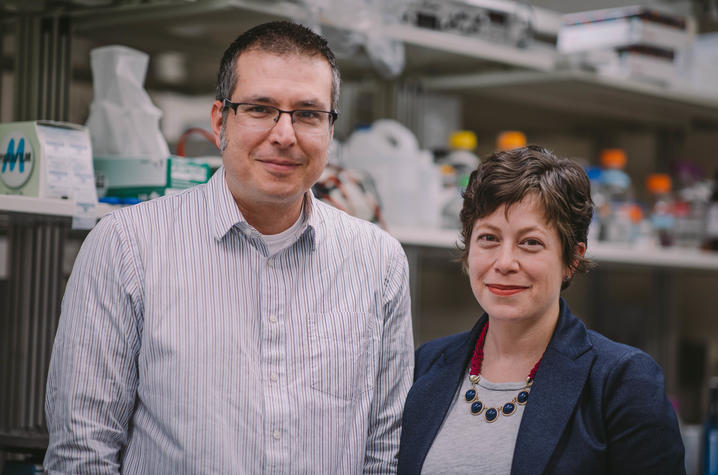 The following article appears in the spring 2019 edition of Ampersand, the UK College of Arts and Sciences magazine. Read more here.

LEXINGTON, Ky. (May 7, 2019) — For the last 10 years, Edith (Phoebe) Glazer, an associate professor of biological chemistry in the University of Kentucky College of Arts and Sciences, has focused on creating new cancer therapies. As an inorganic chemist, she knows there is both a good and bad history of inorganic chemistry in cancer therapies. Drugs made from platinum are effective and successful. Cisplatin remains one of the most commonly used chemotherapy drugs, but Glazer says there hasn’t been a significantly better inorganic drug produced in the cancer field in the last 30 years. She is working hard to remedy that and develop a research platform where inorganic chemistry and the features of inorganic compounds can be used to make better, more selective anticancer agents.

"There have been a number of new inorganic compounds from research groups at other institutions that have gone into clinical trials," Glazer said. "I think we might be right at the inflection point where we’re seeing a renaissance in medicinal inorganic chemistry. It’s an exciting time."

Current cancer drugs can damage important, healthy cells, causing neurological damage, immunosuppression and many other side effects for cancer patients. This happens because the molecules of the platinum agents react with DNA.

"You would normally think this is terrible because it damages the DNA and eventually kills the cell. But, if you are trying to kill cancer cells, it’s a good thing," Glazer said. "The problem with platinum and any other agent that damages DNA is that you get a lot of side effects. You kill the cancer cells, but you can kill nerve cells and cells in the bone marrow that become white blood cells."

This suppresses the immune system, putting cancer patients at risk of dangerous infections. Glazer’s lab is building inorganic molecules that are optimized at absorbing photons and transferring electrons, and can also perform other types of photochemistry. One arm of Glazer’s research focuses on light-activated cisplatin-like molecules.

"The idea was that we could make a ruthenium complex that initially is inert and nontoxic," she said. "It doesn’t do anything to DNA and doesn’t kill cells, but then you can shine light on it and when it absorbs a photon, it becomes active and kicks out a molecule it’s bound to. Then it finds biological molecules like DNA and forms a new bond. That DNA becomes damaged and causes a cascade process which results in cell death."

The lab has expanded its program and is building different shaped molecules utilizing metals. Including a metal produces different geometries and shapes than you can get with organic molecules.

"We are taking advantage of metal organic bonds because they are relatively easy to make, so we can build complex molecules like putting together Lego pieces," Glazer said.

That expansion now includes molecules that are not light activated, but that are built to have a certain shape and certain function. These molecules can do completely different chemistry or have different inhibitory effects on cells. One of the more recent projects is building protein translation inhibitors that inhibit the cell’s ability to make new proteins. Along with needing to replicate DNA, cancer cells need to synthesize protein at a much higher rate than healthy cells. Cancer cells can also be "addicted" to specific proteins — they require them for growth and survival. Blocking synthesis of proteins could be another way to kill cancer cells.

"The ultimate goal is to make molecules that will be as effective or more effective than current chemotherapeutics, but eliminate so many of these adverse side effects that patients experience," Glazer said. "As a research community, we don’t always think about the impact of these side effects. We focus on efficacy rather than quality of life. It’s understandable, but I think we need to try to reduce the toxic effect most patients suffer with standard chemotherapy."

How do inorganic compounds play into this goal?

With inorganic compounds, you have the opportunity to switch things on or off, which means you could potentially spatially localize the toxicity.

"If you’re trying to treat a tumor in the lung, you wouldn’t want to activate the compound in other parts of the body," Glazer said. "So you could possibly avoid peripheral neuropathy or neutropenia. That is the goal."

Once the molecules and compounds are created, the next step is testing. That’s where David Heidary comes in. Heidary came to UK in 2010 with a background in protein structure and function, assay development and drug discovery. Heidary’s lab brings the biological aspect to the project.

"The synthetic chemists make molecules they hope have a certain function, and our job is to test and make sure that the function they’re looking for actually occurs," Heidary said. "Then we think about it in the broader context: If this works on a purified enzyme, will it work in a cell? If it works in a cell, will it work in a larger organism? Just because you make a molecule that inhibits something in a test tube, it still has a very, very long way to go to become a drug."

After graduate school and before coming to UK, Heidary went to work for Aurora Biosciences, which was founded by Roger Tsien, the 2008 Nobel Prize winner in chemistry for the optimization and application of green fluorescent protein (GFP). Tsien developed many fluorescent tools to monitor biological process and Aurora applied these fluorescent reporter systems in drug discovery.

"I have an unusual background from being at the company at a stage where there was a lot of development going on around constructing assays to report on cell function," Heidary said.

He leverages that expertise to develop new assays to investigate the biological function of chemical compounds, adding insights "that were not possible with the experimental systems that are currently available. That makes a big difference for our research," Glazer said.

Where is the research now?

"In 2009, we had a hypothesis. In 2010, we made our first molecules that showed this theory could work," Glazer said. "Since then we’ve been working to build up the complexity of the biological systems that we are investigating the molecules in, but are also trying to understand better how the molecules are working and possible ways they could fail."

The team led by Glazer and Heidary is also currently focusing on structure-based drug design to try to target a specific enzyme that is involved in cancer initiation, malignant progression and, most important, resistance to chemotherapy. And they have had some recent success.

"We are really interested in inhibiting a particular enzyme, which is a cytochrome P450, to try to address issues of chemotherapy resistance," Glazer said. "The hypothesis is if we can inhibit this enzyme, normal chemotherapeutics could be effective again, and potentially be effective at lower doses, which would reduce side effects."

After making many new molecules, tweaking and making more, the lab ended up creating molecules that are so selective for the desired target cytochrome P450, they don’t need a light-activated strategy. This breakthrough wouldn’t have been possible without Heidary’s work in mammalian cells. The assays Heidary has designed show how compounds behave in the living, functioning cellular environment. This helps to understand if the compounds are selective for their target and taken up well in cells.

"We are getting richer information than we ever would have if we just stayed with simple in vitro assays," Glazer said. "This success would not have been possible without the close relationship and interplay between the biology and chemistry because we didn’t know what to change until we got the biological results. We would have no idea if these molecules were even practical to use without having assays in cells."

With bumps in the road — the challenge of science funding — soon after Glazer came to UK, her research was in jeopardy of being set back a year or more. While applying for grants and waiting to hear, she found herself in a position where there was a gap in funding. That’s when the College of Arts and Sciences Academic Excellence Fund was able to help.

"It was a really frightening time," Glazer said.

The university and college were quick to provide bridge funding to keep Glazer’s lab running.

"It made all the difference," she said. "Within a couple of months, I was able to get funded and about nine months later received another grant."

With science funding becoming more and more challenging, the importance of donor funding for higher education becomes even more important. Glazer has also received support from charitable organizations including the American Cancer Society and the Elsa U. Pardee Foundation, as well as receiving grants from the National Science Foundation and National Institutes of Health.

"At some point I think you’ve got to trust people to be good scientists. I don’t think we can work effectively or keep our team of scientists together with so much uncertainty in our support," Glazer said. "The bar for funding has gotten higher and higher and reaches a point where you have to demonstrate that every aspect of what you’re proposing you’re going to do has already been demonstrated to succeed."

The collaborative work between Glazer and Heidary has resulted in many surprises and successes, and has a promising vision for more effective cancer drugs in the future. Glazer is quick to point out that this research wouldn’t be possible without collaborations within the Department of Chemistry and across campus.

"We have amazing colleagues and those colleagues make our science possible," Glazer said. "There are aspects of this research that have been profoundly enriched by these collaborations."

"UK has great core facilities," Heidary said. "We can do nearly any experiment we want, and this is only possible since there are expert scientists in each facility to ensure the different aspects of experiments and equipment work properly."

What first began as a postdoc looking to take on more challenging questions has turned into Glazer’s life’s work and passion.

"It started partly as the intellectual challenge," she said. "This was the hardest medical application I could imagine. I figured there would be a really long path in front of me and that anything I did, as long as it took the next step down that path, would be helpful. It’s become increasingly personal over time, but it’s still a damn good intellectual challenge."