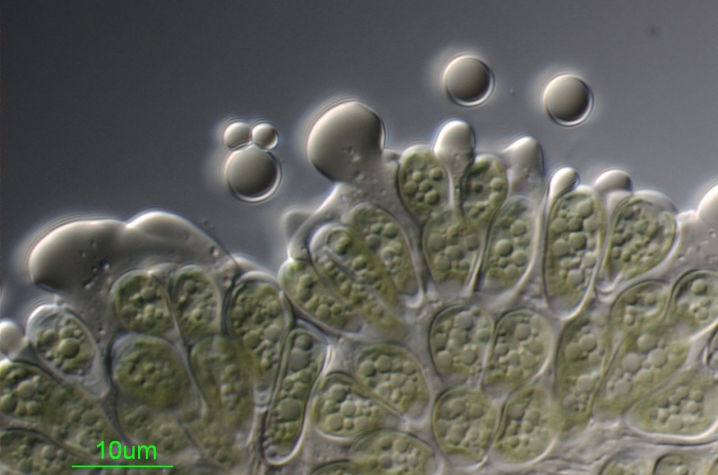 genetically create a replacement for oil and coal shale deposits.  This could have

fundamental implications for the future of the earth's energy supply.

a sabbatical professor from the aquatic biosciences department at the

University of Tokyo; Tim Devarenne, a UK graduate and now professor of

David Watt, professor of cellular and molecular biochemistry (College of

Medicine) and his post-doctoral associate Vitaliy Sviripa had an important

paper published today in the Proceedings of the National Academy of Sciences (PNAS).

of oil and coal.

While scientists previously established that oil and coal have their roots

in the organisms that lived on the planet over 500 million years ago, researchers only

are sure of one organism that directly contributed to these natural resources. That

an oil that over geological time has turned into oil and coal shale deposits.

"Even more exciting is that this unique algae, B. braunii, still exists today and has been

the target of studies from the large chemical and petrochemical industries," said

This algae is very slow growing, so it is not necessarily a good source for biofuels.

However, if scientists can capture its genetic blueprints for the biosynthesis of these

high value oils, then these genes could be used to generate alternative production

This team of investigators isolated the necessary genes, characterized the biochemical

traits encoded by these genes, and then genetically engineered yeast to produce this

very high-value oil.  This work has provided the first example of recreating a true direct

Chappell said, “This represents the culmination of an outstanding effort to understand a fundamental process that has direct ramifications for a real-world

problem — how are we going to generate a truly renewable biofuel supply?”

Devarenne added, "This study identifies a very remarkable molecular mechanism for the production of hydrocarbons that, as far as we can tell, is not found in any other organism.  Thus, it offers a unique insight into how hydrocarbons were produced hundreds of millions of years ago."