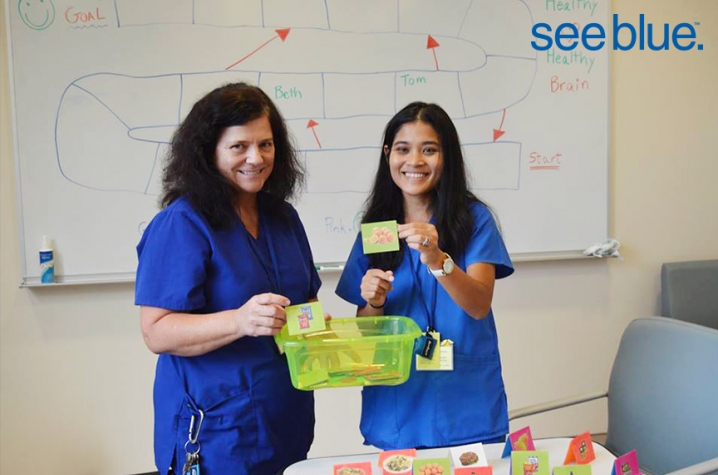 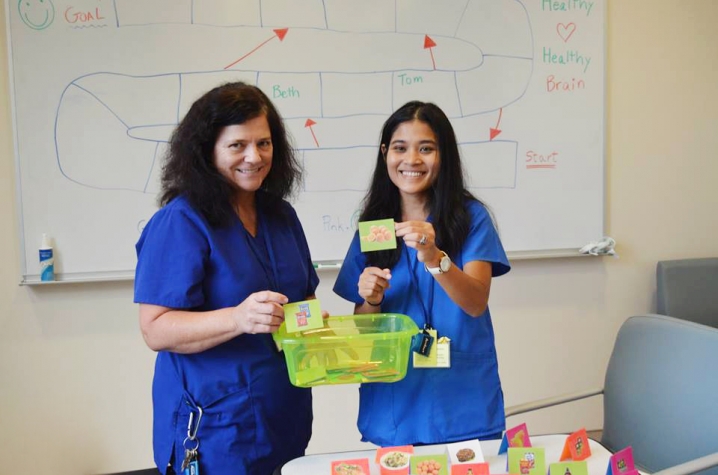 LEXINGTON, Ky. (Oct. 9, 2015) — When University of Kentucky College of Nursing student Sooksai Kaewbua brings her heart-healthy board game to Eastern State Hospital, the first obstacle is getting patients to participate. Using the facility’s intercom, she and fellow nursing staff members in the geriatric unit recruit the first few players to get the game rolling.

By the time she starts the second round of the game, patients are shuffling into the game room. Kaewbua, who acts as the game moderator, gets players to take turns drawing cards from a bucket. The multi-colored cards, which were made from newspapers clippings, depict different types of foods, such as fruits, meats, green vegetables and salt. In the game, patients score points by answering whether the food represented on the card is heart-healthy or not.

While the game’s premise is simple, it serves as an effective teaching method for Eastern State Hospital patients, who suffer from psychiatric conditions such as schizophrenia and bipolar disorder. According to the National Institute for Mental Health, mental health disorders often co-occur with heart disease in older patients. With an interest in investigating this correlation and helping patients, Kaewbua implemented a strategy to prevent heart disease and cardiovascular events in the high-risk population of geriatric patients.

Kaewbua, who is working toward a doctorate of nursing practice (DNP) with a concentration in psychiatric nursing, designed the game as a creative and interactive alternative to lecturing patients at Eastern State Hospital about heart-healthy diets. Kaewbua, who believes board games bring families and social groups together, said the interactive nature of the game forces patients to contemplate their eating choices. The patients gain a sense of accomplishment and engage in friendly competition as they accrue points during the game.

Chizimuzo Okoli, assistant professor in the UK College of Nursing, said Kaewbua’s game addresses a real practice challenge while providing patients with pleasurable and empowering activity. The game is a form of psychoeducation, or a process of education that helps patients with mental illness learn and develop positive health behaviors. Many difficulties arise in attempts to educate psychiatric patients about health behaviors. As Kaewbua’s clinical mentor in the College of Nursing, Okoli thinks the game could be tested in other populations as a possible evidence-based intervention for geriatric patients.

“She is looking at the theoretical link between brain health and heart health,” Okoli said. “It’s something the patients love, but it’s also educating them about healthy choices.”

Originally from Thailand, Kaewbua received her nursing degree from Murray State University. She practiced at a nursing home in Wilmore, Kentucky, where she learned elderly patients, much like young people, are receptive to new ideas and motivated to learn. Instead of lecturing patients at Eastern State about health eating habits, she prefers to facilitate positive experiences for people nearing the end of their life. As a bonus, if patients are discharged from the hospital or return to a nursing home, they take away important lessons about eating healthy.

“It’s fun to listen to them and let them express their feelings,” Kaewbua said. “I want to give them something at the end of their life — the ability to accomplish something and answer a few questions right.”

Sometimes Kaewbua and other nurses use wrong answers as educational opportunities. For instance, when a player draws the bacon card, their favorable feelings about bacon might make them opposed to the idea of bacon as an unhealthy food. When patients give a wrong answer, Kaewbua talks them through the process of rethinking their response. This process has helped many patients understand the food choices made for them in the hospital, such as why they aren’t given salt with their meal.

Heart-healthy diets are critical for geriatric patients, who have a higher risk of experiencing a cardiac event. The American Heart Association reports more than half of all patients with cardiovascular disease are older than age 60. Seventy-seven percent of cardiovascular deaths occur in people 75 and older.

Kaewbua was recently recognized as the Paula Fritz, RN, Award recipient during the 2015 Saha Awards for Cardiovascular Research and Education on Oct. 2.