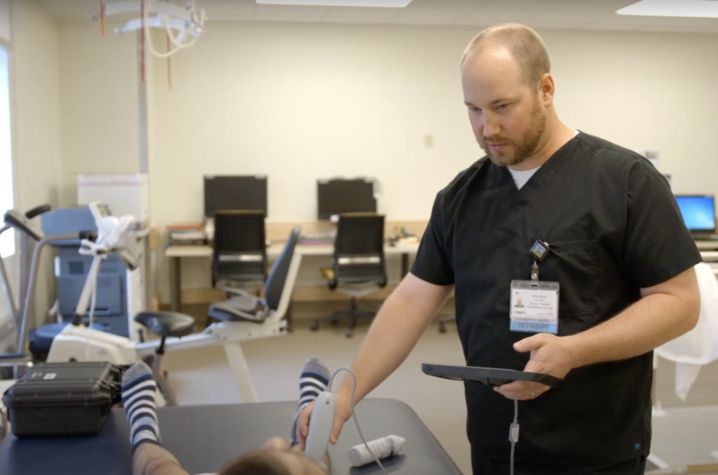 LEXINGTON, Ky. (Jan. 20, 2023) — Kirby Mayer has known since he was a teenager that he wanted to be a physical therapist. His grandmother had Alzheimer’s disease and frequently received physical therapy at home in their rural Kentucky town.

“I saw those one-on-one interactions, and the difference they made,” he said. “Simple things like music and dancing would change her mood. Her physicians didn’t say much about those kinds of things, but the physical therapists did. They helped give her better quality of life.”

Now a doctor of physical therapy, assistant professor in the College of Health Sciences, and clinician researcher in UK’s ICU Recovery Clinic, Mayer specializes in outcomes for patients who have survived a critical illness and ICU stay. While some patients gradually return to their pre-illness health status, many have long-term or permanent impairments; the underlying causes of these disparate outcomes are poorly understood.

Mayer hopes to fill gaps in this knowledge and, to do so, has recently been awarded a K23 Mentored Career Development Award from the National Institute of Arthritis and Musculoskeletal and Skin Diseases. The $753,000 grant supports a research study on cellular and physical function outcomes that contribute to failed muscle regrowth in patients recovering from critical illness.

“This project is all about understanding why certain patients don’t recover after a critical illness and an ICU stay. We know some people get better, and get better fast, and they go back to work and driving — they recover. But a large percentage of patients don’t. One and even five years later, they have deficits in muscle and physical function. There’s a significant amount of disability after critical illness,” he said.

One effect of a critical illness and ICU hospitalization is loss of muscle strength and speed, in part due to long periods of immobility. This muscle atrophy in turn makes recovery more challenging, on top of how a severe illness itself ravages the body.

“My K23 research is really centered around muscle: from what’s occurring on the cellular level — is there mitochondrial damage, or changes in protein synthesis — all the way up to functional aspects, like ‘Are you walking, are you moving, are you driving?’

“I think a lot of the impairments and symptoms like fatigue are due to the prolonged inflammatory state that patients experience during and after a critical illness. They get sick, the illness causes systemic inflammation, and it doesn’t spare the muscles. For some people, the inflammation resolves and the muscles recover, but for others it doesn’t,” Mayer said.

The research study will also look at environment variables of where patients live, including if they have access to gyms, sidewalks or other spaces where they can be physically active. From a rural town in southern Kentucky and having completed his doctorate of physical therapy at UK’s Center of Excellence in Rural Health in Hazard, Kentucky, Mayer knows that geography directly affects health.

He and his research team will enroll 200 patients over the next four years, focusing on individuals who’ve been in the ICU due to sepsis or acute respiratory failure (ARF). It was a rotation in the ICU while completing his doctorate that spurred Mayer’s curiosity about what happens to such patients after they’ve left the hospital.

“Traditionally, people who survive these illnesses (sepsis or ARF) don’t have structured follow-up care, like someone who has a hip replacement or is a stroke survivor might have. They don’t have that kind of pathway,” he said. “But UK is very fortunate to have the ICU Recovery Clinic — a really unique team that you don’t see at a lot of hospitals — which allows us to follow and treat these individuals.”

Most participants in the study will do noninvasive testing at three, six, and 12 months after hospital discharge to measure things like muscle strength, power, ambulation and cardiorespiratory function. A subset of 10% to 20% of these participants will also have blood draws and muscle biopsies. Adults without history of critical illness will be enrolled as a control group.

Since K grants focus on training, in this study Mayer is pioneering a novel approach to muscle biopsy analysis. Before the procedure, participants who have muscle biopsies will drink “heavy water” that has an extra hydrogen molecule. This enables isotope labeling during the biopsy analysis, which then allows Mayer to look at RNA and mitochondrial biogenesis in the muscle tissue.

“Understanding the cellular environment in the period after hospital release, and how it impacts muscle protein turnover, will inform efforts for effective therapies to accelerate muscle regrowth,” he said.

His K23 study builds on his previous research, including two studies supported by pilot funding from the UK Center for Clinical and Translational Science (CCTS). One study, with collaborators Ashley Montgomery-Yates, M.D., director of the ICU Recovery Clinic, and Nathan Johnson, Ph.D., D.P.T., associate professor of physical therapy, used fMRI to look at brain changes in ICU survivors. The second study examined muscle loss in patients who experienced an acute kidney injury while in the ICU; this project is a collaboration with University of New Mexico and University of Iowa and is funded by a pilot grant from the Consortium of Rural States (CORES), of which the UK CCTS is a member, within the Clinical and Translational Science Award network.

“The pilot grants, the services of the CCTS outpatient research clinic, CCTS feedback from my KL2 application, and the collaborative atmosphere at the CCTS are primary reasons my K23 grant was funded,” Mayer said.

He is emphatic about the importance of team science for research to improve well-being, and the impact of the mentorship he’s received. His primary mentor on the K23 award is Esther Dupont-Versteegden, Ph.D.; the team also includes Benjamin Miller, Ph.D.; Charlotte Peterson, Ph.D.; Amy Pastva, Ph.D.; Peter Morris, M.D.. Stacy Slone, M.S.; and Ashley Montgomery-Yates, M.D.

“This work is not the result of just myself, but of countless people — mentors, collaborators, my students, our clinic team and most importantly the patients. The science would be arduous without a dedicated, interprofessional team, and our work would be meaningless without engaged patients that truly understand how research can improve medicine and help others in the future."