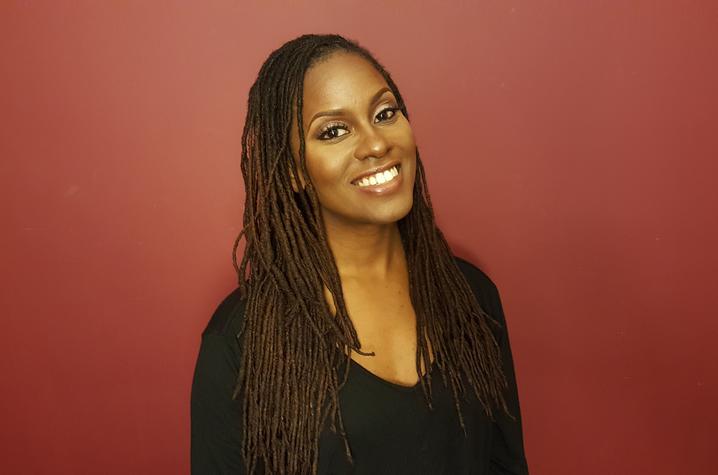 LEXINGTON, Ky. (Nov. 14, 2019) — Candice Nicole Hargons is not interested in glossing over the intricacies of racism. She is using science to take a deep dive into conversations about whether racism exists, who is most impacted by it and what it means to be racist.

Her thoughtful exploration of racism has helped springboard her career as an assistant professor of counseling psychology at the University of Kentucky College of Education, where she is a prominent voice in the emerging science of racial trauma.

Hargons wants to create research-based ways to help heal the hurts of racism, and she wants to use her voice to modify systems that help create it.

She approaches her work with what she calls a “love ethic,” which is a way of saying that, no matter what, her research, teaching and service efforts are centered around making people feel loved and cared for. To hear Hargons’ story is to understand how she came to see the importance of caring for others as paramount to anything else that happens during her career.

“We moved around a lot as a kid,” Hargons said. “At one point, we were in subsidized housing in a small town in western New York. People around me experienced mental illness, domestic violence, and substance abuse, but had a whole lot of love.”

In one of Hargons’ recent studies, she explored what happens, physiologically, when someone witnesses racism. Her study recruited black college students who listened to a voicemail someone left for a University of Maryland professor. The caller ranted at him, using racist language and stereotypes. The study participants wore heart monitors that collected data throughout the experiment. Hargons was particularly interested to see how hearing the voicemail impacted heart rate variability.

Being exposed to or witnessing racism, the study showed, can lead to psychophysiological injury. To varying degrees, all participants’ heart rates rose while listening to the recording, and their heart rate variability became truncated, a phenomenon that can lead to negative health consequences over time.

“Racism can break your heart. It hurts. It can hurt your body. It’s not somebody being too sensitive. It’s a tax. If every day you are experiencing microaggressions and racial attacks, you will have negative physical and psychological health consequences. This study provided biometric evidence, adding to a growing body of research showing this to be the case. People have been saying racism hurts for hundreds of years. Our science takes this beyond anecdotal evidence and adds proof to the pudding,” Hargons said.

Hargons’ study extended beyond establishing that racism can have negative health consequences. She spent a year at Emory University’s counseling center in its stress clinic. There, she learned about biofeedback, meditation and other mind/body interventions that help reduce stress. She translated that knowledge into her creation of the 17-minute Black Lives Matter Meditation for Healing Racial Trauma. Half of the study participants listened to the meditation after hearing the voicemail. The other half sat in silence for 17 minutes.

When time was up, study participants were debriefed and the research team conducted a qualitative interview. They asked questions such as “Did you consider it racist?,” “How do you define it?” and “What was your experience like with the meditation?”

The research team saw three different themes emerge, and some participants’ reactions fell into more than one category. Some were detached from the experience. They said things like “it didn’t really affect me” or “I wonder what her life experiences were like for her to become so racist.” Some sat more closely with their reaction. They talked about the emotions they felt during the experience such as sadness, anger, frustration or feeling helpless. Others had a more somatic reaction. They cried, shook, felt their body tighten or felt their heart racing.

“You learn you can’t express emotion as a person of color, because there is a risk to that vulnerability,” Hargons said. “The students were in a protected space, and those who had the physical letting out, such as crying or shaking, said they felt better after. The somatic release can be an adaptive and helpful response.”

The research team observed the participants’ data changing as the control group sat in silence and as the experimental group listened to the meditation. Both groups experienced a decrease in markers for stress. The researchers were not expecting the silence and meditation groups to have the same result, but they were remarkably similar.

“I believe the participants found solace in the stillness. They said things like ‘I never get a chance to sit in silence for 17 minutes.’ It showed that meditation is only one of many possible ways someone can cope after experiencing racism,” Hargons said.

The experience of being part of the study and hearing the meditation was affirming for many participants. They have felt racism impacting their mental and physical health, but have so often been challenged on it, they second guess their reactions. "It helped them feel they were not making up how they felt and reacted," Hargons said.

“A lot of students in the interview portion talked about how they had learned to cope with racism. They had been told ‘you need to get over it, move on.’ Sometimes you have a harder time than people want you to have with it. We wanted to see if meditation was a way to help cope. And coping is important because if you are not both physically and mentally well, it becomes less and less possible to survive and thrive.”

A Huffington Post article about Hargons’ meditation has been shared more than 5,000 times and the meditation has been used at counseling centers on college campuses across the U.S. Hargons hopes this attention will help inclusive meditation become a widely used and viable coping strategy that can lead to healing. Perhaps part of what has helped the work reach so many is Hargons’ ability to talk about it in ways that make it accessible and understood by a variety of audiences.

“You can write in an academic tone in a journal, but it’s important to make sure you can talk to your grandmother about it too. If you can’t, what is the point,” Hargons said.

Her ability to connect extends to her students as well. She currently advises five graduate students, co-advises two others and is director of the master’s program for counseling psychology in the UK College of Education Department of Educational, School, and Counseling Psychology.

“Many of my students have never had a person of color as a faculty member and they have been craving that. They have said ‘I am happy to see that you exist,’” Hargons said.

Hargons is still in the early stages of her career, but is already taking on roles and receiving accolades in areas typically reserved for the later part of an academic’s career. She believes in intentional infiltration — finding places where women like her traditionally haven’t had a voice, and going there. She was the first early career professional in the history of the American Psychological Association’s Society of Counseling Psychology to be appointed to the Council of Representatives, and among only a handful of early career professionals to represent their states and organizations on the council. She used the opportunity to change policy, stand up for students and advocate for the council to focus on the role of psychologists in responding to issues such as police brutality. She also assisted with the American Psychological Association’s solidarity for Black Lives Matter movement.

Two of her research papers received national recognition in 2018. She is founding director of the Center for Health Racial Trauma and she was recently surprised to hear her name called during a meeting of the American Psychological Association. She was awarded a presidential citation, presented by Rosie Phillips Davis, a researcher whose career is one she would like to emulate. She commended Hargons for her commitment to leadership development and education and for her fearless research on and commitment to social justice.

“I’m really grateful to have the opportunity,” Hargons said. “UK is my dream job. I have great colleagues, great students, and get to do all the things I want to do.”