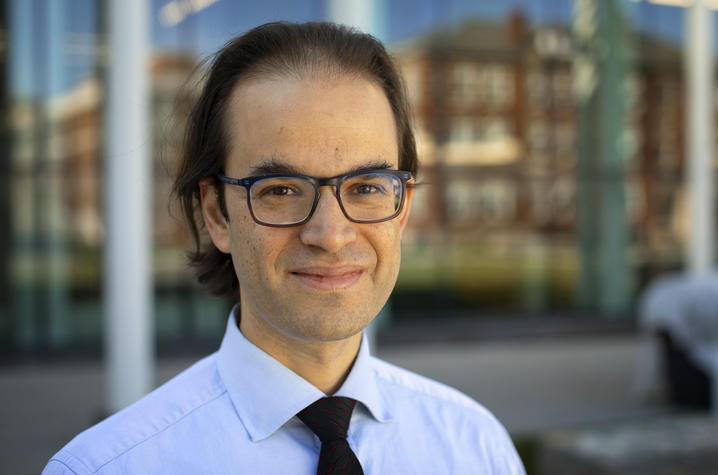 Ramsi Woodcock, an assistant professor in the UK College of Law with a secondary appointment in the Gatton College of Business and Economics, will receive funding from the Knight Foundation for research into internet governance. Mark Cornelison | UK Photo

LEXINGTON, Ky. (Nov. 4, 2019) — The University of Kentucky is one of 22 universities, think tanks and advocacy organizations that will receive funding from the John S. and James L. Knight Foundation in support of new, independent research intended to inform federal policy affecting the future of the internet. UK will receive $100,000 to fund research by Ramsi Woodcock, an assistant professor in the College of Law with a secondary appointment in the Department of Management in the Gatton College of Business and Economics.

The Knight Foundation announced today it is providing more than $3.5 million for the study of diverse, timely topics including content moderation by social media companies, antitrust enforcement in big tech and the pervasive problem of disinformation online.

“These issues are moving faster than we can evaluate and analyze them. We need to close the knowledge gap, if our society is going to make smart decisions about how to ensure technology strengthens democracy rather than weakening it,” said Sam Gill, vice president at Knight Foundation. “Knight is investing in and supporting this research to ensure that a diverse range of views and a body of real evidence informs urgent policy debates. How we answer the questions of today will shape the American democracy of tomorrow.”

UK joins universities such as Harvard, Duke, UCLA and Stanford in providing research-based information that will help meet the urgent needs of federal lawmakers and other decision-makers as they shape the future of the internet.

Woodcock's research focuses on how the internet is changing the balance of bargaining power between firms and the individuals who use their services, and what the law can do to maintain a fair balance.

"The nation is facing a crisis in internet governance along multiple dimensions," he said. "We have privacy problems, ranging from data breaches to exploitation of data on users by Google and Facebook to inform targeted advertising, personalized pricing and more. We have the problem of how to balance free speech on the internet with regulation of hate speech, attempts to influence our elections by foreign governments, and the like. We have the problem of how to fund journalism in an age in which the advertising revenues newspapers once relied upon are now being captured by Google, Facebook, and Amazon. And then we have problems of market concentration and monopoly, exemplified by Google's large market share in online advertising, Facebook's large market share in social media, and Amazon's growing market share in online commerce."

Woodcock proposes distributive justice, meaning fairness in the distribution of goods and wealth, as a possible unifying framework for resolving many of these issues.

"The internet has created vast economic benefits in a number of industries but has also disrupted old ways in which benefits were distributed within those industries," Woodcock said. "The solution to many problems of internet governance today lies in finding ways to structure the internet to distribute those benefits more equitably. I am delighted the Knight Foundation has chosen to support this emerging approach to internet governance and to recognize the University of Kentucky's ability to advance this research."

Woodcock is one of the foremost junior legal scholars in the United States writing about antitrust and technology, and a pioneer of the distributive perspective on the internet. In addition to supporting Woodcock’s research, the Knight Foundation funding will support his organization of a major conference on the distributive justice perspective on internet governance. The conference, which will be held at UK College of Law in the 2020-2021 academic year, will bring together scholars in law and economics from around the world who have been developing this approach.

“This Knight Foundation grant recognizes the scholarly excellence and promise of our faculty colleague, Ramsi Woodcock, in a league with the best law scholars in the country," said Mary Davis, interim dean at the UK College of Law.  "We look forward to hosting this groundbreaking conference next year."

According to a news release announcing the Knight Foundation effort, the institutions receiving new Knight support were selected through an open funding opportunity to expand fundamental research on the norms, rights and responsibilities that govern digital services, in particular, social media. The funding opportunity is ongoing.

Research topics include the responsibilities of social media companies and digital service providers with regard to how they moderate, police and present content that increasingly informs our national civic conversation, and issues of antitrust and competition in the online arena. Both reflect ongoing debates on Capitol Hill and critical conversations in Silicon Valley.

In recent months, the U.S. House of Representatives and Senate have held hearings on questions of market power, antitrust, technology companies’ use of algorithms and their accountability in enabling online extremism and violence. This has prompted policymakers to consider whether, and to what extent, to change Section 230 of the Communications Decency Act, which shields tech companies from legal liability over content posted by their users.

The Federal Trade Commission and Department of Justice have separate ongoing investigations into the competition and business practices of several tech companies. Additionally, almost all state attorneys general are investigating both Google and Facebook for anti-competitive behavior. And, last week, Facebook CEO Mark Zuckerberg faced intense scrutiny by members of the House Financial Services Committee regarding the company’s cryptocurrency plans and its role in society at large.

The investments are part of Knight’s recently announced $50 million commitment to support research on how technology is transforming our democracy and the way in which people are informed in the digital age. The foundation committed nearly $45 million earlier this year to support long-term research at American universities, research institutions and think tanks.

The Knight Foundation grant furthers the goals of Kentucky Can: The 21st Century Campaign, UK’s $2.1 billion comprehensive campaign focused on increasing opportunities for student success, funding innovative research, improving health care, strengthening our alumni network, and supporting our athletic programs. More than halfway to its goal, Kentucky Can is transforming the quality of life for the people and Commonwealth UK serves. For more information about Kentucky Can, visit kentuckycan.uky.edu.

About the John S. and James L. Knight Foundation

Knight Foundation is a national foundation with strong local roots. We invest in journalism, in the arts, and in the success of cities where brothers John S. and James L. Knight once published newspapers. Our goal is to foster informed and engaged communities, which we believe are essential for a healthy democracy. For more, visit https://kf.org.

Farm Road to Temporarily Close to Thru Traffic Jan. 25-28