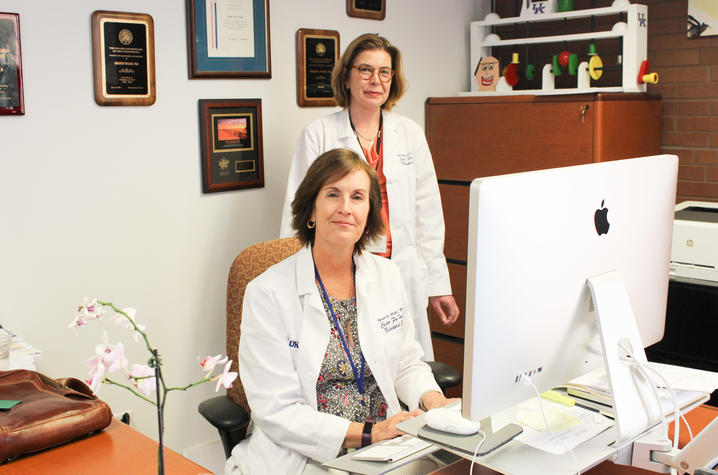 LEXINGTON, Ky. (May 22, 2018) — Better delivery of medications to treat opioid use disorder (OUD) is key to addressing the opioid crisis and helping the 2.6 million Americans affected by the disease.

While FDA-approved medications are effective for treating persons with OUD, including buprenorphine, methadone and naltrexone, each has its own unique barriers that impact patient access to care.

Buprenorphine, used to treat the symptoms of withdrawal and stave off cravings, is used primarily in formulations that are taken sublingually, in the form of pills and films. Despite being effective and efficacious in treating OUD, the formulation has limitations such as misuse and nonadherence, diversion and the possibility of unintended pediatric exposures.

In an article recently published in the Journal of the American Medical Association (JAMA), Dr. Michelle Lofwall, associate professor of psychiatry, and Sharon Walsh, director of the UK Center on Drug and Alcohol Research, studied the efficacy and safety of buprenorphine delivered as a weekly or monthly injection via CAM2038, a fluid crystal depot buprenorphine therapy for moderate-to-severe OUD.

The study compared the performance of weekly and monthly CAM2038, with the current standard of care, a daily sublingual dose of buprenorphine/naloxone. Results showed the drug’s non-inferiority on the primary responder rate outcome, which was based upon highly sensitive urine testing detecting illicit opioids. These data suggest that injectable buprenorphine is effective and may have advantages.

The results of this study will aid in improving access to treatment for many patients and reduce adverse risks of traditional buprenorphine.

“Together with the six-month buprenorphine implant, these new long-acting medication delivery systems would allow us to administer a proven medication to the patients directly, improving adherence, leading to improved medication efficacy as well as avoiding the potential for missed or stolen doses, diversion or accidental pediatric exposure, which are significant public health concerns that contribute to stigma of treatment and the disorder,” Lofwall said.

The article, "Weekly and Monthly Subcutaneous Buprenorphine Depot Formulations vs Daily Sublingual Buprenorphine With Naloxone for Treatment of Opioid Use Disorder," can be accessed on JAMA's website here.​