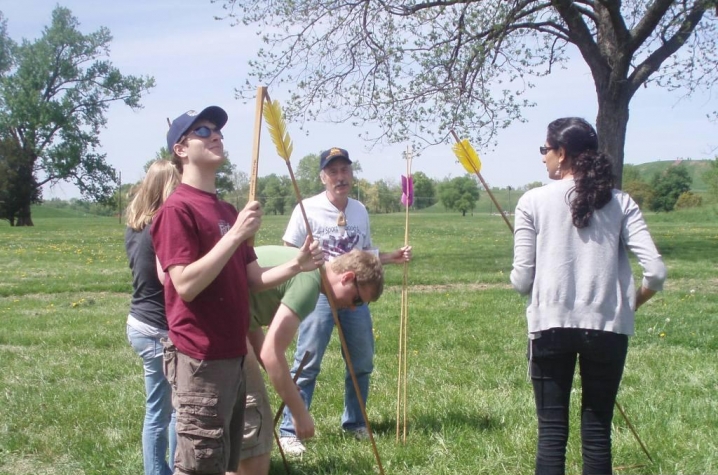 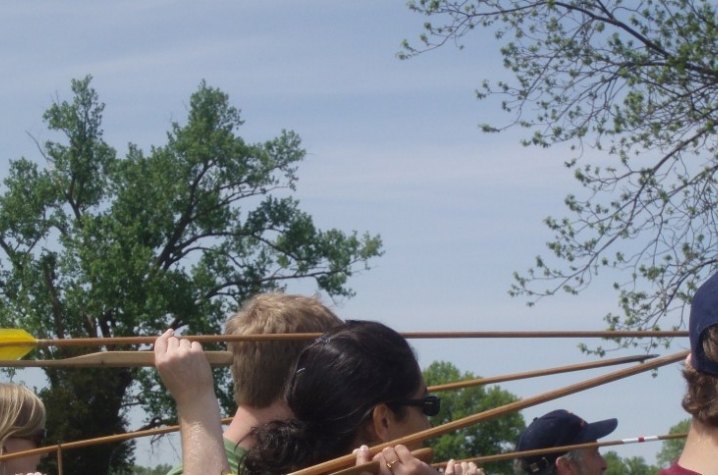 LEXINGTON, Ky. (Nov. 2, 2011) - A University of Kentucky club is bringing anthropology to life and giving students hands-on experience with a prehistoric weapon whose popularity peaked 30,000 years ago.

Since its founding last year, the CATLATL Club at UK has introduced many students to the atlatl: a long-range, spear-throwing weapon that resembles a bow and arrow and ball thrower.

The atlatl, which employs basic physics to launch a dart at a designated target, is a spear-like device with three main parts: the handle (grip), the shaft and the peg. The dart is located at the rear of the atlatl and then launched by snapping the wrist. The atlatl launches a dart with more force and speed than when thrown by hand. And in prehistoric times, the atlatl was more efficient than a spear.

This Nahuatl term, coined by the Aztecs, was a tool used for war and hunting. The atlatl and dart are the first natural weapon system of the human race; the bow and arrow followed. Humans hunted large mammoths with the atlatl, and many became extinct because of it. Today, the atlatl is still used for hunting, as well as competition.

CATLATL president Brandon Ritchison and club technician Cara Mosier became interested in the primitive atlatl and its history after hearing about the tool in an introductory anthropology class. Mosier had the opportunity to shoot an atlatl at Cahokia Mounds in St. Louis with UK's Undergraduate Anthropology Club; and from there, she was hooked.

"The opportunity to use the atlatl really brought prehistory to life," she said.

Along with going to Cahokia Mounds, club members took a trip to Mammoth Cave for an archaeology tour this fall and are planning another trip in the spring — possibly to Serpent Mound in Ohio, according to Ritchison.  "We want to plan trips that will improve our knowledge of prehistoric history as well," he said.

The CATLATL Club aspires to give its members a look at what life was like 30,000 years ago.

In addition to learning about the atlatl, the organization provides training, opportunities for artistic expression and a chance to learn more about regional anthropology.

"Although hitting a standing target at 10 meters is a far cry from hitting a living deer in the woods, when you hit that first bull's eye, you end up with an appreciation of what life was like for people before our time," said Ritchison.