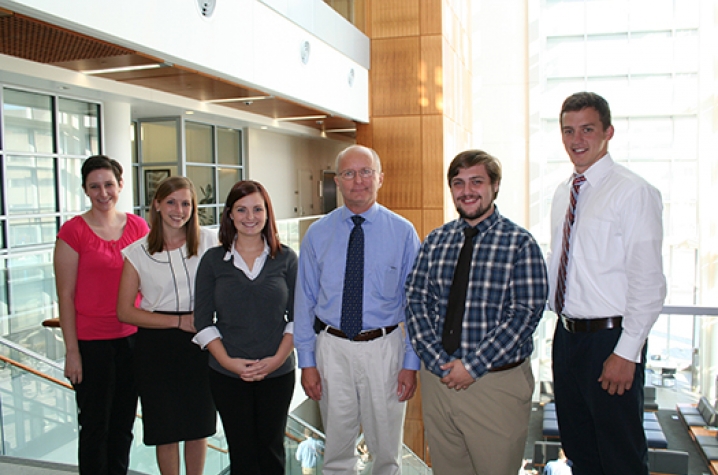 LEXINGTON, Ky. (Oct. 8, 2014) — University of Kentucky College of Pharmacy students have always had exceptional clinical skills. Thanks to the American College of Clinical Pharmacy (ACCP), now there is a national stage on which to showcase them.

The college’s 2014 ACCP Clinical Pharmacy Challenge team has reached the national quarterfinals for a second year in a row, and is the only college of pharmacy to return from last year’s roster.

This year’s team is led by Jonathan Hughes of Madison, Mississippi, and includes fellow team members Brette Hogan Conliffe of Frankfort, Kentucky; Savannah Lindsey of Glasgow, Kentucky; David Roy of Fort Thomas, Kentucky; Carly Stoneman of Hendersonville, North Carolina. All of the students are members of the college’s fourth-year PharmD class. Hughes, Lindsey and Stoneman will represent UK in Austin. Conliffe and Roy competed in the early rounds of competition and will serve as alternates.

Now in its fifth year, ACCP’s national team competition for pharmacy students returns to the annual meeting in Austin, Texas, site of the inaugural 2010 Clinical Pharmacy Challenge. The competition continues to grow, drawing participation from 104 institutions across the country and internationally.

The online round competition, which concluded September 12, gave eligible teams the opportunity to compete in up to four rounds of competition in which they answered items in each of the competition’s distinct segments: trivia/lightning, clinical case and Jeopardy-style.

“We were elated to have this opportunity to compete at the quarterfinals,” Hughes said. “And we are proud to be carrying the torch of fellow UK College of Pharmacy clinical skills teams who have paved the way for us. I remember looking forward to hearing from Dr. Kuhn each week about how last year’s team had done. We were so proud of them and they served as an inspiration to our team.”

The 2014 entrants first heard about the competition from last year’s team, which also competed at the national quarterfinals. That team was comprised of Class of 2014 graduates Zachary Noel, David Marr, Katy Garrett, Gavin Howington and Andrew Stacy.

According to last year’s team captain, there is a certain pride in seeing this year’s team reach the quarterfinals.

“When we met with this year’s team, I knew they had a chance to not only make it back but to advance even further than we did,” said Noel, now a UK HealthCare pharmacy resident.

The common bond to the teams is faculty member Bob Kuhn, the College’s Kentucky Hospital Association Professor in the Department of Pharmacy Practice and Science, who serves as coach. Kuhn takes great pride in preparing the team and brings in UK HealthCare clinical specialists to help sharpen the team’s skills. The preparation for the Pharmacy Challenge is truly a team effort with nearly a dozen faculty and clinical specialists hosting review sessions and questions for the team as they prepare for the competition.

And, as Noel says, the team appreciates their tireless leader.

“We can’t thank Dr. Kuhn enough,” Noel said. “He really is the engine that inspires, motivates and helps build our confidence. We would never have represented UK at this level without his leadership.”

For Kuhn, being able to spark a passion in clinical pharmacy and help students succeed is at the heart of why he became an academic pharmacist.

“It is all about the students,” Kuhn said. “Being able to watch them grow throughout this process is rewarding both professionally and personally. And I can’t wait to see what this year’s team does.”