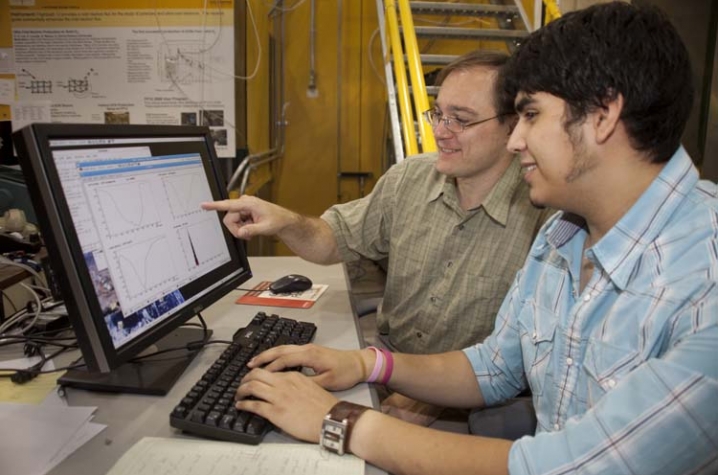 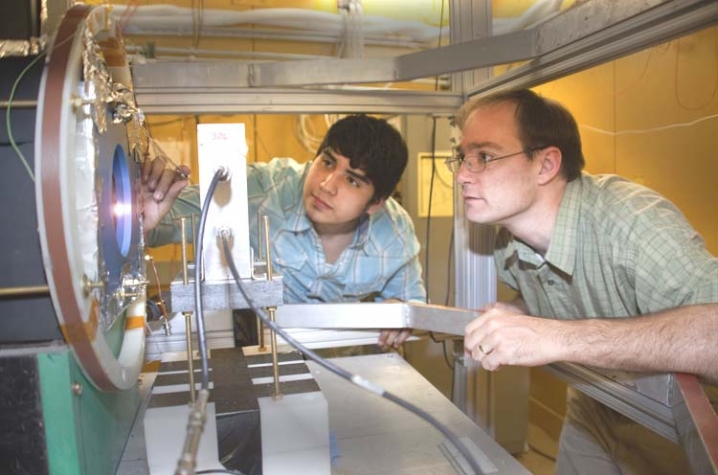 LEXINGTON, Ky. (Sept. 2, 2009) - The objects Roel Flores spent the summer studying meet the definition of "infinitesimal" -- but the ramifications of the undergraduate research opportunity for the physics major were enormous.

The University of Kentucky junior accompanied physics Professor Chris Crawford to the Los Alamos (N.M.) National Laboratory in late May, where they used sophisticated precision equipment to test symmetries in fundamental nuclear physics.

Flores, 20, participated in this experiment through an Appalachian & Minority Science, Technology, Engineering & Mathematics Majors (AMSTEMM) fellowship funded through the University of Kentucky. He asked Crawford during a spring semester class if he could participate in the professor's research.

"I wanted to get a much more real laboratory experience," he said.

There's no question he's found his summer to be rich and rewarding.

Even more important, the experience is helping Flores, who plans to study physics in graduate school, focus on his future.

"Part of this experience is helping me decide which path in physics I want to take," Flores said.

Flores and Crawford had a chance to advance pure science by learning more about the nature of the universe's smallest building blocks.

"We're trying to get a glimpse of the nature of the weak nuclear force," explained Crawford. “Almost all interactions between elementary particles would look exactly the same if they were viewed in a mirror. This is not the case for the weak force, which has an associated left-handedness. Weak interactions look backwards in a mirror, just as the reflection of your left hand appears to be a right hand."

Crawford and Flores attempted to control the polarization (spin) of neutrons, subatomic particles that have no electric charge.

"(Scientists have) polarized neutrons before. Now we're pushing to new levels of precision that we can measure the polarization of neutrons," Crawford said.

The first step in the experiment involved breaking neutrons free from nuclei, using a high energy beam of protons going almost the speed of light. Those neutrons are slowed down to normal speeds by scattering through cold liquid hydrogen. At this point the neutrons will be "unpolarized," or spinning in all different directions.

Next, Crawford and Flores polarized the neutrons by passing them through a “spin filter”, which absorbs neutrons that are spinning in the “wrong” direction. The spin filter is a gas composed of the inert isotope helium-3. Crawford and Flores shined a high-power, circular polarized laser on the helium nuclei, which forces the nuclei to spin in unison. The helium nuclei react strongly to absorb neutrons passing through that are not spinning in the same direction.

Crawford and Flores used a similar apparatus to determine how polarized the neutron beam was after emerging from the filter. Special nuclear detectors used by Los Alamos scientists located neutrons and determined their spin.

"We never actually see the neutrons; what we see are blips on a computer screen," Crawford said.

"We want to know what fraction of neutrons are 'right-handed, or spinning counter-clockwise'" Crawford said.

Crawford and Flores were primarily working to explore the effectiveness of this technique of observing neutrons and their polarization.

This research will lead to new experiments which will run at the brand new $1.4 billion neutron research facility at Oak Ridge National Laboratory, two hours south of UK.

Crawford was excited by the opportunity offered by the summer spent in Los Alamos with Flores. It provided one of those moments sought by every professor who mentors a student -- the chance to engage the student at a critical time in the student's career-decision process.

"We encourage our students to get a broad range of experience to decide which area of their discipline they want to pursue," Crawford said.