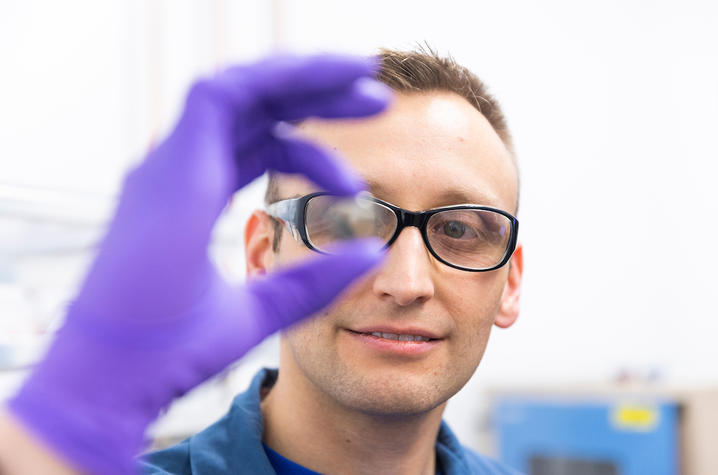 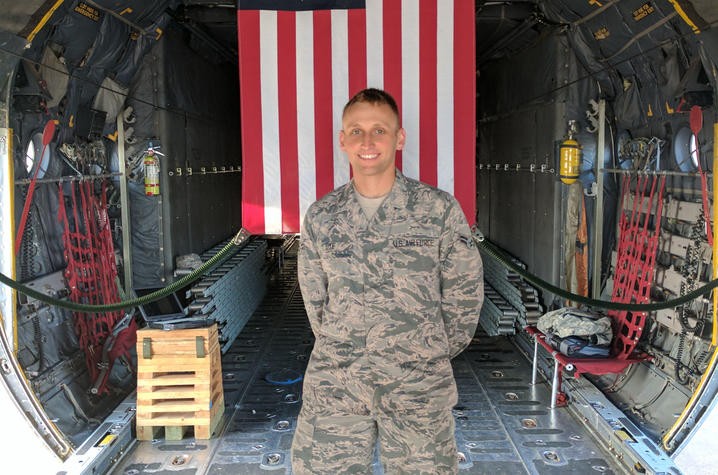 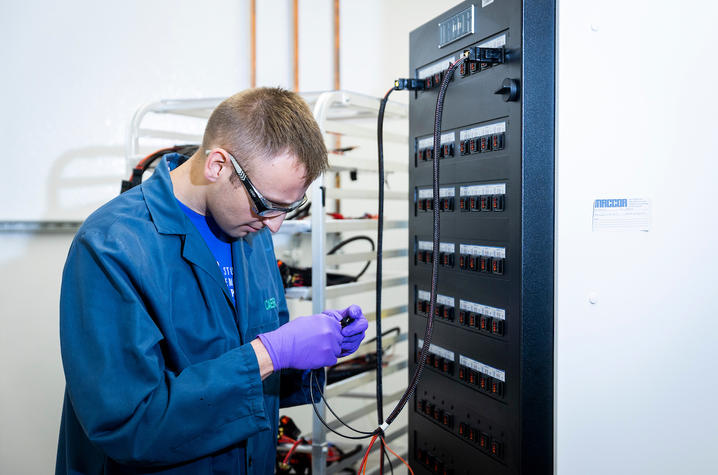 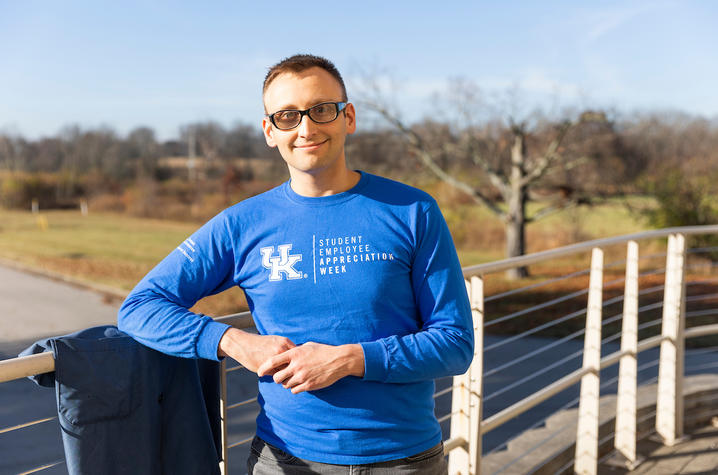 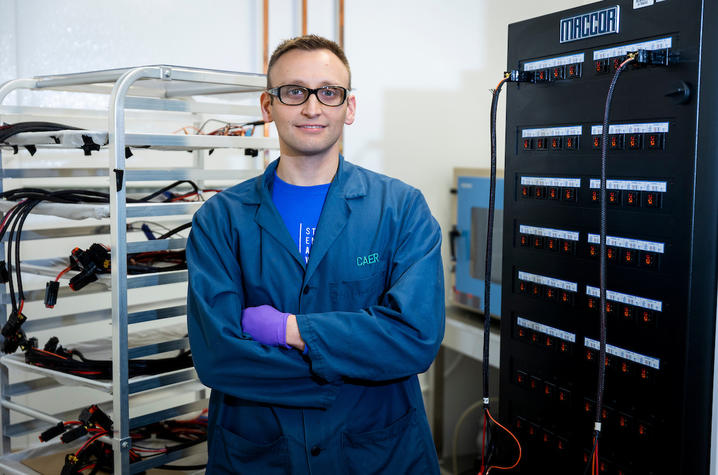 LEXINGTON, Ky. (Nov. 11, 2022) — Growing up in Eastern Kentucky, Donovan Dye said he really did not know what an engineer did. He knew what a scientist was, of course, but never dreamed he would actually become one.

Fast forward, today, Dye is nearing completion of an engineering degree at the University of Kentucky, is a member of the Air Force National Guard and is conducting undergraduate research at UK’s Center for Applied Energy Research.

In 2016, Dye was at a career crossroads. The McDowell, Kentucky, native had a good job. He was working as an automotive technician for Don Jacobs BMW in Lexington.

Still, he dreamed of more.

Dye graduated from South Floyd High School, in McDowell, a small town with a population of 700 in Floyd County, Kentucky, just outside of Prestonsburg. He always enjoyed working with his hands and becoming a BMW technician was enticing.

Following high school graduation, Dye enrolled in an automotive tech program in Illinois in a track that gave him the best chance of getting into the competitive BMW specific program. He was accepted into the program and moved to Orlando, Florida, to begin training.

After completing the program in 2008, Dye accepted his first paid position as a BMW tech in Huntsville, Alabama. Dye left that position in 2012 to come back to the Commonwealth. He moved to Springfield, Kentucky and accepted a similar position with Don Jacobs BMW in Lexington.

“I had been doing the same job for about six or seven years,” said Dye. “Though I enjoyed working on vehicles, the problem-solving had become monotonous and I really needed a new challenge doing something that would contribute to society in a bigger way.”

He placed signs on his bedroom door, listing three pathways in front of him. He knew he needed to make a decision, and he wanted to remain mindful of his opportunities.

The first option was to move and continue to work on BMWs in a larger city with more opportunities. Option two was to join the military. Option three was to go back to school to become an engineer.

His decision to combine the last two options propelled Dye to a UK-military life that continues to open doors to new possibilities.

In 2016, Dye joined the Air Force National Guard based out of Louisville, poised to become a C-130 aircraft maintainer. He spent the first couple of months at basic military training in San Antonio, Texas, and received follow-on training in both Little Rock, Arkansas, and Wichita Falls, Texas.

Dye’s talent and commitment earned him several awards and commendations. He received the Commander’s Award for superior academic achievement, high standards of leadership, teamwork and character. He also volunteered as an airman leader to improve his leadership skills and become less shy.

Things were getting busier in his personal life, too. Immediately following military training, Dye got married to his best friend, Alex.

Once back in Kentucky, it was time to tackle his next challenge. He enrolled in Bluegrass Community and Technical College’s (BCTC) BluePlus program with his eye on enrolling in engineering at UK.

After receiving his associate degree from BCTC, he transferred into the UK College of Engineering’s Department of Chemical Engineering. Donovan accepted a co-op opportunity at Parker Hannifin O-Ring Division.

In 2019, Donovan and Alex welcomed their first child, Liam.

The new parents received some unexpected news. Donovan’s co-op position was being eliminated, and he was left scrambling. Zach Fuqua, director of career development in the UK College of Engineering’s Career and Co-op Office, suggested he contact the UK Center for Applied Energy Research (CAER) to see if any undergraduate research opportunities were available.

“UK CAER took a chance on me,” Donovan says. “And I’m sure glad they did.”

Since the fall of 2019, Donovan has worked for CAER’s Carbon Materials Group, working to turn coal into high-value carbon fiber. CAER is one of the very few places in the world that can create carbon fiber from coal, and Donovan has played an integral role in that process.

As if that life wasn’t hectic enough, the military came calling in June 2020. He was deployed to Kuwait as part of Operation Inherent Resolve for six months.

Once back in Kentucky, he continued his engineering coursework and his work at CAER.

Donovan continues to work as a C-130 repair and reclamation crew chief. He spends at least one weekend a month in Louisville building wheel and tire assemblies, rigging landing gear and rigging flight control surfaces that allow the planes to fly.

The Dye family also recently welcomed a new child — Oakleigh, who is now 2 months old. Donovan will graduate in May 2023 with his degree in engineering.

“Having kids was really important to me,” he says. “I’ll be the first to admit that my schedule makes things challenging. Alex has been incredibly supportive. Like most college students, I lose sleep due to homework. But she is losing a lot more sleep than me, and I can’t thank her enough for what she means to me and my family.”

The team at CAER remains impressed with how Donovan manages it all and can do so with such a positive and joyful attitude.

“Dye is a committed and very self-motivated undergraduate research assistant who consistently does great work,” said Matt Weisenberger, associate director for CAER’s Carbon Materials Group. “I think his military discipline and attention to detail shines through. It’s a pleasure working with Dye.”

What the future holds for the Dye family is still being discussed.

“I’ve recently started working on battery research and development at CAER. We are testing different graphites and making lithium-ion coin batteries. That’s been very interesting to me,” said Donovan. “I really hope to go to graduate school, earn my Ph.D., and lead a team. Hopefully, my military training and leadership skills will help with working with a team of people.”

Though his pathway was not traditional, he would not have had it any other way.

“Sometimes I wonder if had gone straight to engineering school where I’d be now,” said Donovan. “But the diversity of knowledge and experience wouldn’t have been there. Those opportunities provide me a different perspective. I’ve put things together. I’ve been an operator. All these skills will help me a better engineer and researcher.”

Here he is today, taking Eastern Kentucky coal and turning it into carbon fiber and building batteries of the future. All while serving his country.

“You can’t help but be inspired by Dye,” said Rodney Andrews, CAER director. “His commitment to his family, community and our country makes us all proud. We are honored that CAER can play a role in his journey.”

The annual UK Veterans Day Observance will be held 2 p.m. Friday, Nov. 11. Organized by the Veterans Resource Center, the ceremony will be held at The Cornerstone Esports Theater. Doors open at 1:30 p.m.

All UK faculty, staff and students are invited to attend as the university pays tribute to the sacrifices made and courage displayed by the veterans within the UK community. Lapel pins representing the military branches will be distributed, and a reception will follow the ceremony. You can find more information here.