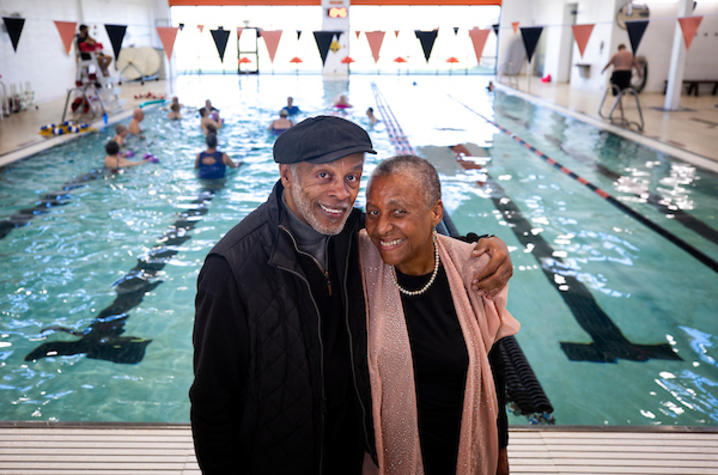 Chester Grundy and his wife Ann poolside at the Lexington YMCA. When Chester suffered an aortic dissection, a new app developed by a Gill physician helped Chester see exactly what was happening to his heart. UK Photo | Mark Cornelison

LEXINGTON, Ky. (April 2, 2019) — It's perhaps a person's greatest fear: being told you have a life-threatening condition that you've never heard of.

Chester Grundy of Lexington had that experience about two years ago when he arrived at UK HealthCare's Emergency Department with chest pain. But a clever tool developed by a doctor at the Gill Heart and Vascular Institute helped inform Chester and his wife Ann about his condition and ease their anxiety.

Ann had persuaded Chester to join her at her weekly water aerobics class at the YMCA.  About 10 minutes into the class, however, he began to have chest pain. "He told me he felt as if a horse was sitting on his chest," she recalls. The instructor and the Y director called for an ambulance.

"The doctors were all over my situation" at the emergency room, Chester said. After some tests, cardiologist Dr. John Kotter sat down with Chester and Ann and told them that Chester had a condition called aortic dissection.

"When I heard the words aortic dissection, I said 'What is THAT? I know what an aorta is, but I've never heard of that," Ann said.

Then came a confusing tangle of explanations: ascending, descending, rupture, self-repair. "Doctors were reassuring us that Chester would be OK, but they were drawing in the air with their fingers. It was so hard to follow."

Enter Dr. Michael Winkler with an answer to their prayers. Part Thomas Edison, part Willy Wonka, Winkler has made his mark at UK HealthCare's Gill Heart & Vascular Institute by merging his background in visual arts with his scientific expertise to create elegant solutions to imaging problems.

Medical imaging creates vast amounts of data in "slices," which can then be reassembled into animated 3D images. Numerous software companies offer products capable of performing this task, known as post-processing, but the resulting computer files are very large. With his background in art and visual media, Winkler was convinced there was a way to make sophisticated animations using media storage, file compression, and file formatting techniques that would yield imaging files small enough for easy display on a computerized device with a screen.

Winkler collaborated with University of Kentucky undergraduate student Leon Lin to develop an open access, small, and easy-to-use computer application that accomplishes these tasks. The “app,” called Mixing Cup, improves the quality of a patient's 3D animations. Patients can then see their medical problems illustrated in stunning detail on a cell phone. The files are so small that they can be easily emailed or displayed in a web browser.

"Images are as powerful for communication as words and we all tend to remember images more than we do our conversations. However, a lay person has trouble understanding the images that we are radiologists review," said Winkler. "3D animations are easy for patients to understand, which is why Mixing Cup is such a useful tool for communication with patients," said Winkler.

Winkler had met Chester, a UK retiree, previously from their work with the NAACP. He hurried to his office to make an animation of Chester's aorta, which he brought to Chester's bedside to view on his cell phone.

"Ultrasounds, X-rays, all those things, they're something I just can't figure out," Chester said. "But I understood immediately what I was looking at and what was going on. I felt more at ease right away because I was more informed."

Ann too, was reassured. "Being able to see something so clearly was very helpful," she said. "It put all the science stuff in a lay person's language."

With the video, Winkler and Kotter helped Chester and Ann understand that an aortic dissection occurs when the inner layer of the aorta — the large blood vessel branching off the heart — tears, allowing blood to pool between its inner and middle layers. The condition can be fatal if the blood ruptures through the outer wall of the aorta. Chester, luckily, had the less dangerous "Type B" dissection, which can often be managed medically.  After hospitalization for aggressive blood pressure control, Chester was able to return to his normal lifestyle without surgery.

Chester is back to life as usual: walking three times a week, continuing his work as an influential civil rights activist and teasing his wife. "I won't be suggesting water aerobics again for a looooong time," she laughs. "I'm still paying for it!"

Winkler chose to publish Mixing Cup as an "open access app" so that patients and physicians everywhere could take advantage of the service quickly and easily.

"UK is a public institution, and as such we must factor in our mission to serve the immediate needs of Kentuckians. In the case of Mixing Cup, we felt it was important that the application be available to anyone for free," he said.