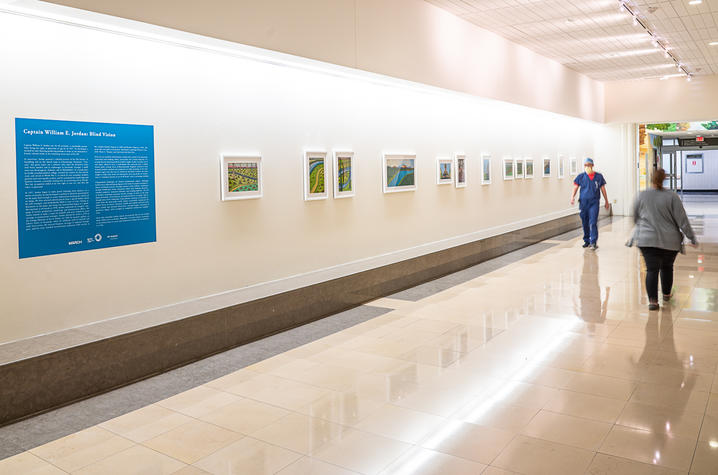 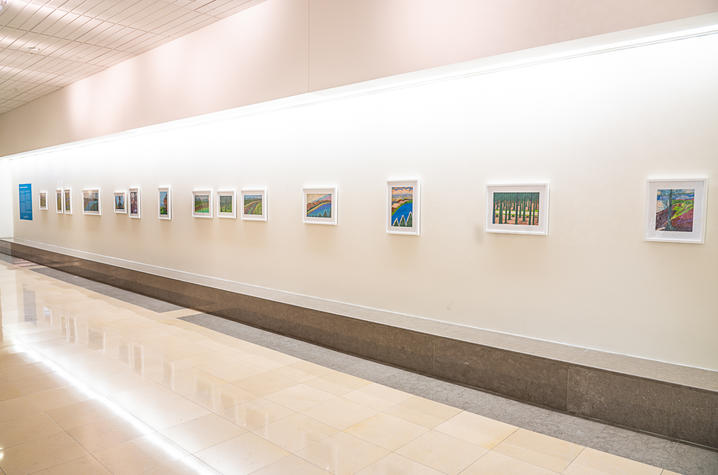 LEXINGTON, Ky. (Dec. 14, 2020) – A new exhibition in the University of Kentucky's Albert B. Chandler Hospital’s Hamilton Gallery displays the work of Captain William E. Jordan, an artist who made remarkable color drawings after losing his vision to glaucoma.

Captain William E. Jordan – Captain is his name, not his title ­– was abandoned as an infant on the steps of a Tennessee church and grew up in orphanages and foster families in Georgia, Alabama and Pennsylvania. He served, and was wounded, in World War I and spent his post-war years in various jobs and business ventures before settling as an accountant in Florida.

In 1957, he lost vision in one eye, then the other. In the remaining seven years of his life, he made as many as a thousand colorful drawings based on images from his memory. He developed a method of pressing his pencil hard into the paper to create indentations, then he would fill them in with color, using the indentations as a guide.

Jordan’s work was widely exhibited in his lifetime; he showed his work in 1959 at the Georgia Museum of Art in Athens. In 1960, he opened a gallery in Savannah, where he exhibited work by himself and other local artists. He received frequent coverage in regional newspapers, and his story reached international audiences with articles in the London Sunday Express in 1960 and Reader’s Digest in 1963. The artist also sent gifts to prominent individuals including Winston Churchill, Harry S. Truman and television host Jack Paar.

Jordan was also a dedicated humanitarian and made his techniques available to others with visual impairment. He recorded instructional reels and sent them to anyone who requested them. He also sought to help other artists by forming his own non-profit art association to “stimulate interest in art of all forms” and to encourage students.

"Every time I pass by this exhibit and see these beautiful, colorful drawings, I'm reminded of the power of the human spirit. I'm so moved by the thought of this man,” said Jason Akhtarekhavari, manager for UK Arts in HealthCare. “He was advanced in years, having lost sight in both of his eyes and yet, he had not lost his vision. He had gained a new sort of vision. I imagine him at a table, using his fingers to follow the indentions in the paper while his mind worked furiously to recall images from his past. Through his efforts and through his determination, he expressed himself and shared these beautiful drawings with us. There is a powerful lesson to be learned from this man's legacy. It's a prime example of the how the power of the arts and human creativity can lift us all up and beyond our physical limitations."

This exhibit was curated by Philip March Jones, contracted curator for the Jacqueline R. Hamilton and the UK Hospital Auxiliary Galleries and will be on display in Chandler Hospital in the corridor between pavilions A and H until March 2021.