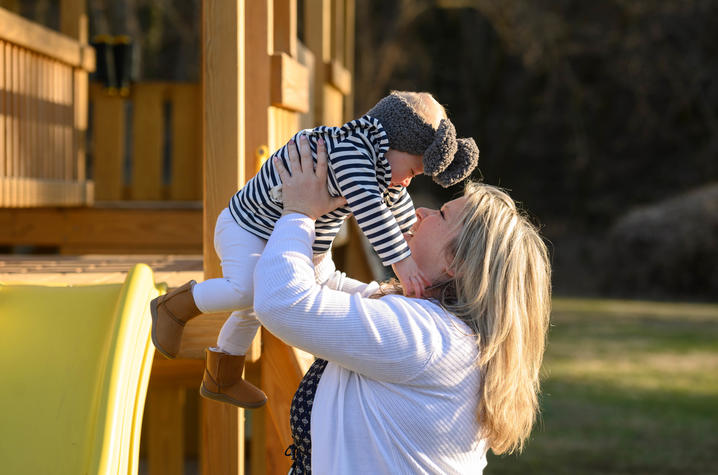 Felicia Baker experienced eclampsia when she was 6 months pregnant, a serious complication that gave both her and MaKenzie a 20% chance of survival.

She was 6 months pregnant with her third child, so having a headache and fatigue wasn’t something that particularly concerned her. She was more focused on her 8-year-old son’s ear infection. Her vision started to blur, so she laid on the couch to take a nap. That’s the last thing she remembers.

Her husband, Timothy, takes over the story from there. Felicia had a seizure, something Timothy recognized immediately because his brother had them when he was young. He called 911, but being so far from their local hospital, he tried to get Felicia into his car so he could meet the ambulance halfway. Unable to move her, he anxiously waited for the ambulance to arrive.

Once it did, the EMT took one look at Felicia and called for a helicopter to transport her to the local hospital. But when they met the helicopter, the flight crew knew right away that she would have to be flown to UK HealthCare’s Chandler Hospital.

Timothy took off in his truck and drove straight to Lexington from their home in Clay County. He was met by Dr. John O’ Brien, chief of the Division of Maternal-Fetal Medicine at UK. O’Brien explained that Felicia’s placenta fluid had been leaking and was at a dangerously low level. It caused eclampsia in Felicia, a rare but serious condition in which high blood pressure results in seizures during pregnancy. Almost immediately, he presented Timothy with an impossible choice: induce Felicia to have a natural birth, which would give her a 40% chance of survival, but the baby would be stillborn; or, perform an emergency C-section which would give Felicia and the baby each a 20% chance of survival.

Timothy consulted with Felicia’s family, and they all agreed. If there was even the smallest chance the baby would survive, that’s what Felicia would want.

“I told Dr. O’Brien,” Timothy recalled. “He said ‘I hoped you would say that. I like giving everyone a chance.’”

What came next was the most agonizing 45 minutes of Timothy’s life. Then a nurse came out and said both Felicia and the baby were doing well. But their fight wasn’t over.

Felicia was intubated and moved to the ICU. It was a week before she was able to meet her baby daughter, who they named MaKenzie.

MaKenzie was taken to the Kentucky Children's Hospital neonatal intensive care unit (NICU), where, like her mother, she was hooked to a ventilator to support her underdeveloped lungs. Born at just 1 pound, 5 ounces, Timothy was shocked at how small she was.

“I couldn't really see her because there were so many wires and tubes and little boxes to help her breathe,” he said. “She could fit in the palm of my hand. It was just crazy that I was seeing something this small actually making it through everything that had gone on.”

Meanwhile, Felicia was moved out of the ICU and into the maternal unit where she spent the next two weeks. After she was discharged, she and Timothy spent as much time as possible with MaKenzie in the NICU.

Over the next few months, MaKenzie battled pneumonia and had open-heart surgery to repair her patent ductus arteriosus (PDA), an opening within the heart that normally closes itself soon after birth. She was 2 months old when she was finally removed from the ventilator. Her oxygen was gradually reduced, and on Oct. 5, 2020, after 110 days, MaKenzie was finally cleared to go home.

But MaKenzie’s challenges continue. Kentucky was, and still is, in the grips of the COVID-19 pandemic, and with MaKenzie’s fragile lungs, she’s particularly susceptible to the virus.

“Now I have a preemie and then a pandemic," Felicia said. "And then it's like, well, you're never leaving the house.”

MaKenzie recently celebrated her second birthday. She has overcome all delays that resulted from her premature birth and has reached every milestone for her age.

“She’s 25 pounds of pure spunk and sass, and she is very inquisitive about everything she touches,” Felicia said. “She watches, she checks everything out. She’s such a fighter.”

As Felicia and Timothy look back on the everything that happened over the past two years, they don’t take a single moment for granted.

“My whole world turned upside down at the drop of a hat,” said Timothy. “We went from having a great day at the lake the day before to sitting in a hospital the next day with a 20% chance of life. This is a situation nobody should have to go through but sometimes it's placed upon people just to say, 'Hey, man, this is what it is, and if you believe the Lord, he will bring you through it.'”