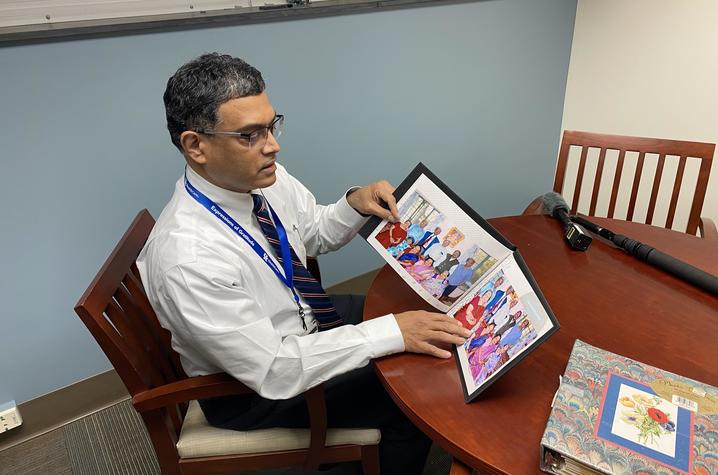 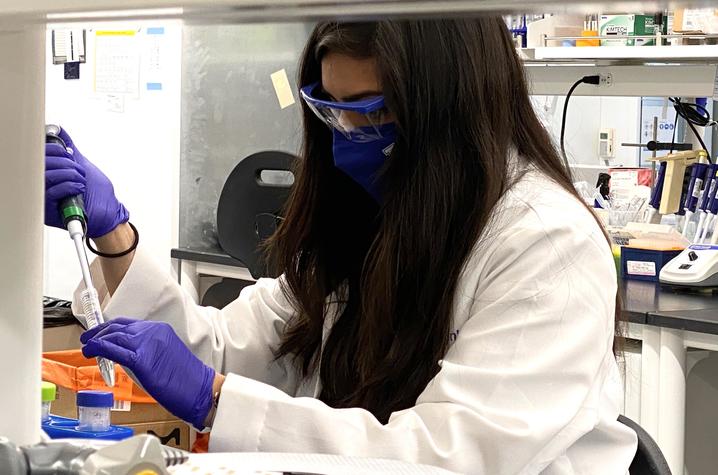 LEXINGTON, Ky. (May 18, 2021) – Though she grew up in California, University of Kentucky Markey Cancer Center research assistant Sumati Hasani spent many summers of her childhood visiting her extended family in India. The first-generation South Asian American has many fond memories of visiting  her family overseas, whose residences spanned every corner of the country.

“My mom is a teacher, so we would get to spend two-and-a-half, three months there during the summer,” said Hasani, who is currently working on her doctorate in biochemistry and molecular biology in the UK College of Medicine. “We spent a lot of time going city to city and seeing everyone. It’s probably my favorite part of my childhood.”

With a debilitating second wave of COVID-19 ravaging India, Hasani – and many other South Asian Americans with close ties to the country – are stressed and worried about the safety of their friends and family. Hasani estimates that about two-thirds of her direct extended family has already had or currently has COVID-19, though she says thankfully, none of her close family members have passed away so far.

Others haven’t been so lucky. Markey radiation oncologist Dr. Mahesh Kudrimoti grew up and attended medical school in Hyderbad, India, coming to the U.S. in 1996 to practice medicine. His mother’s side of the family lives in an area of India that’s been hit particularly hard by COVID-19, and he’s already lost six family members to the disease over the past year. He stays in close contact not only with his family, but with friends he made in medical school, many of whom are now directly on the frontlines of the pandemic in India. Kudrimoti describes many of their experiences as “gut-wrenching” and says getting multiple perspectives on the pandemic has driven home how dire the situation is.

“I see the frustration from the patient’s perspective – the lack of access, shortage of materials and medical providers,” he said. “From the providers’ side, I see the other element – my friends report the difficulties they face in managing such high loads of patients and their frustrations in not living up to the expectations that their patients have.”

Being half a world away from family members who need help has been difficult, Kudrimoti says.

“One thing most of us find difficult is caring for somebody in India who is sick, because travel is so difficult,” he said. “We had an issue with my mother-in-law last summer; she had a stroke that wasn’t COVID-related… but my wife couldn’t travel to India [to be with her mom]. In other circumstances, she could have taken family medical leave to care for a family member, but this wasn’t a possibility.”

Hasani echoes that sentiment, likening the long distance barrier between her and her family as living “behind a glass door” where being able to help feels impossible.

“[My family is] scared,” she said. “They’re terrified. And we are terrified watching them be scared. I felt very helpless for a while.”

Compelled to take action, Hasani reached out to the Markey Cancer Foundation to ask if there were ways she and her colleagues could help. The Foundation connected her with Markey Associate Director for Strategic Relations Vivek Rangnekar, Ph.D., who has been involved in international research collaboration with Indian cancer institutions since the late 1990s.

Because of the urgent need, the Markey Cancer Foundation, Hasani and Rangnekar rushed to create a campaign. Hasani and Rangnekar worked with a contact at the USA-India Chamber of Commerce to develop a fundraiser with the goal of raising money to send oxygen concentrators to three of Markey’s partner hospitals in India: Tata Memorial Hospital in Mumbai, Saroj Gupta Cancer Research Institute in Kolkata and Manipal Kasturba Medical College in Manipal.

“At the Markey Cancer Center, we have longstanding collaborations with several cancers research institutions and hospitals in India,” Rangnekar said. “This fundraiser reinforces our strong cooperation and solidarity with them in the fight against COVID-19.”

Oxygen concentrators are small, portable machines that work by pulling oxygen from the air. Unlike oxygen tanks, they don’t require refilling, and can be reused over and over by patients who require supplemental oxygen. They can truly be a lifeline for patients who aren’t able to access hospital care in India, where the number of beds and resources in medical facilities right now is incredibly limited.

“One of the more devastating mutants of COVID-19 that has hit India recently is actually impacting lung capacity of patients,” Hasani said. “So many patients are perishing just waiting in line for a bed to be treated in hospitals or have access to oxygen… so we figured if we could send some of these concentrators to India, to our partners, then maybe we can at least help the patients who are waiting to be treated.”

The fundraising goal is $50,000, which would cover the cost of sending at least one pallet of oxygen concentrators (16) to each of Markey’s partner hospitals, but more concentrators (in pallets or singly) will continue to be purchased for these facilities as funds come in. The Markey Cancer Foundation is covering all of the administrative and support costs, so 100% of funds raised will go directly towards these efforts. Hasani says that this aid won’t just help those in each hospital’s city, but will also provide help in the more rural surrounding areas.

To donate to the Markey fundraiser for India COVID-19 relief, visit https://ukmarkey.org/india-relief.