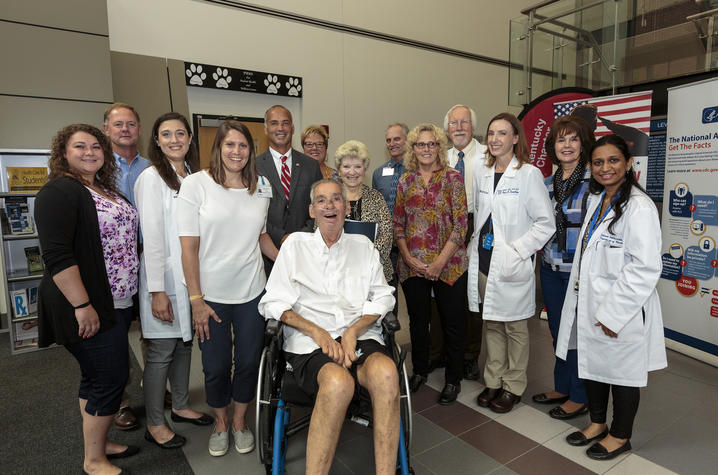 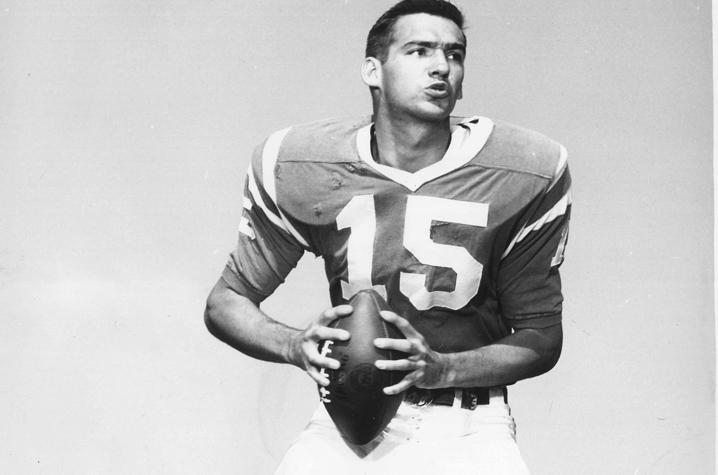 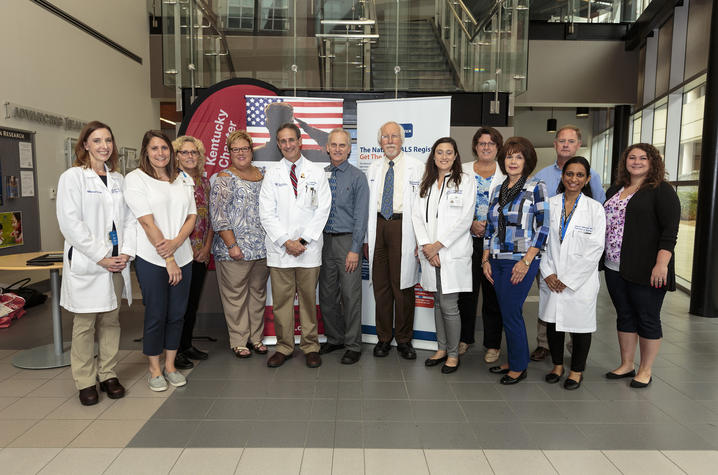 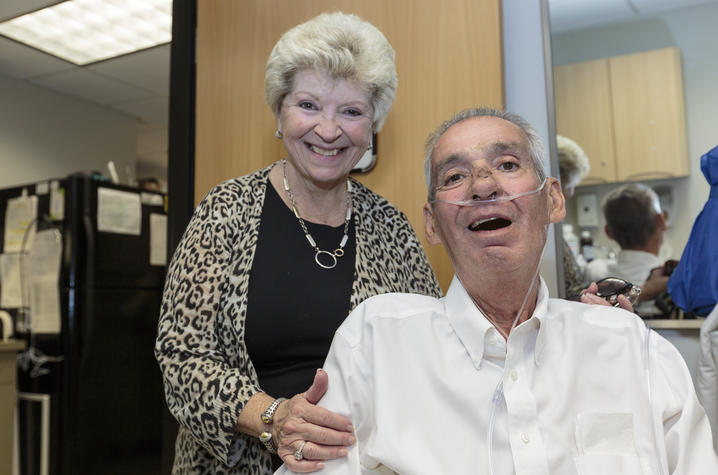 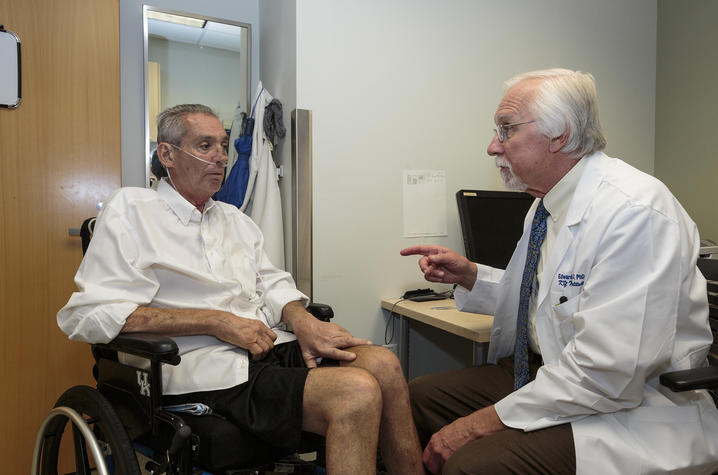 LEXINGTON, Ky. (Aug. 21, 2017) — Everyday, approximately 15 people learn they have Amyotrophic Lateral Sclerosis. ALS is a progressive neurological disease that affects the nerve cells in the brain and the spinal cord, eventually stealing from its victims the ability to walk, dress, write, speak, swallow and breathe. Most ALS patients die within five years of diagnosis, and currently, there is no cure.

But tens of thousands of people are living with ALS, requiring a dizzying array of treatments and services to help them stay mobile and independent. The ALS Association, headquartered in Washington D.C., was formed in part to provide people with ALS and their families the resources to live fuller lives.

One such family has a name perhaps as recognizable as Gehrig's – at least in Kentucky. Talbott Todd had a memorable football career as University of Kentucky Wildcat in the mid-1960's, playing multiple positions for Coach Charlie Bradshaw. Todd, nicknamed "the Richmond Rocket" during his high school days, is perhaps most famous for his 1964 game-clinching fumble recovery that ended top-ranked Ole Miss’s 22-game regular-season road game winning streak. His tenacity on the field was acknowledged last year when UK named the alley between the football and Nutter Field House "Talbott Todd Way," and current Wildcat players use that path to enter  Kroger Field at every home game, honoring the man who represented UK admirably long before they were born.

That same tenacity has served him well as he and his family deal with his ALS, diagnosed in 2015.

"Everything about Talbott was happy, healthy and normal, but I noticed that every once in a while, his speech was slurred," said Marilyn, Todd's wife of 52 years. "The first doctor thought it was medicine side effects, a second doctor conducted every kind of test but ALS was not in our thoughts at all."

After his diagnosis, Talbott and Marilyn made an appointment with Dr. Ed Kasarskis, director of UK HealthCare's ALS Clinic at the Kentucky Neuroscience Institute. They felt a connection the moment he walked through the door – the result, Marilyn says, of his easy personality, patient listening and clear explanations.

"He acknowledged right away that this diagnosis was something no one wants to hear, but we weren't entirely powerless in the situation," Marilyn said. "Everything about him said, 'This is not just about being sick.'"

Research has shown that multidisciplinary care, or the practice of having physicians and other health care professionals collaborate to provide the most comprehensive treatment plan for patients, helps people with ALS have a better quality of life and actually prolongs life in most cases.

Kasarskis (fondly called "Dr. K" by patients and staff) is almost dogmatic in his commitment to his patients and their care, and therefore his ALS Clinic at UK is set up so that patients can typically see every member of the care team:  neurologist, physical therapist, occupational therapist, respiratory therapist, nurse, dietitian, speech language pathologist, social worker, mental health professional and an ALS Association (ALSA) Chapter Liaison – in a single visit.

That, plus UK's significant involvement in ALS research, has earned them a coveted title from the ALS Association: ALS Association Certified Treatment Center of Excellence. There are fewer than 50 such centers in the U.S., and UK is the only one in Kentucky.

"The University of Kentucky continues to exhibit the highest levels of established national standards of care in the management of ALS, providing patients with high-quality compassionate care and support," said Mari Bacon, executive director for the Kentucky Chapter of the ALS Association. “The care that people receive here is a model for other parts of the country, and I’m proud that we are able to recognize UK for its outstanding multidisciplinary approach to treating people with this devastating disease."

Marilyn points out that an ALS diagnosis requires the entire family's hands-on assistance.

"God blessed us with two sons:  Jim, his wife Shannon, and their two children Cape and Eben who live in North Myrtle Beach; and Jeff who lives in Lexington with his wife Bobbi and their children, Christian and Taylor. Their love and support cannot be measured in time or money, and we could not do it without them."

Marilyn also treasures the friendships she's made through the ALS Association Kentucky Chapter support group meetings. "We ask questions of one another and share ideas.  We support family members in their grief and keep up with each other long after the battle is over."

ALS also exacts its financial toll as patients tend to require expensive equipment to help prolong their sense of independence at home.  A customized wheelchair, for example, can cost $25,000 to $30,000 and take several weeks to manufacture. UK HealthCare's ALS clinic, in partnership with ALSA Kentucky Chapter and volunteer Roddy Williams, helps manage the Loan Closet, which functions as a sort of public library to support patients until their own equipment arrives.

"ALS is often not diagnosed until the patient has significant symptoms and you can't just get equipment off the shelf," said Kim Williams, Roddy's wife and a partner in their business, APEX Mobility. "The Loan Closet helps bridge the gap while the patient waits for their new equipment to arrive."

The Todds used the Loan Closet after Talbott was first diagnosed and are currently awaiting the arrival of his new customized wheelchair.

The ALS Association Kentucky Chapter recognized UK at a reception and plaque presentation last week, and the Todd family was present to help commemorate the honor.

About the ALS Association Kentucky Chapter

The ALS Association is the only national non-profit organization fighting ALS on every front. By leading the way in global research, providing assistance for people living with ALS through a nationwide network of chapters, coordinating multidisciplinary care through certified and recognized treatment centers, and fostering government partnerships, The Association builds hope and enhances the quality of life while aggressively searching for new treatments and a cure. For more information about The ALS Association, visit  www.alsaky.org.