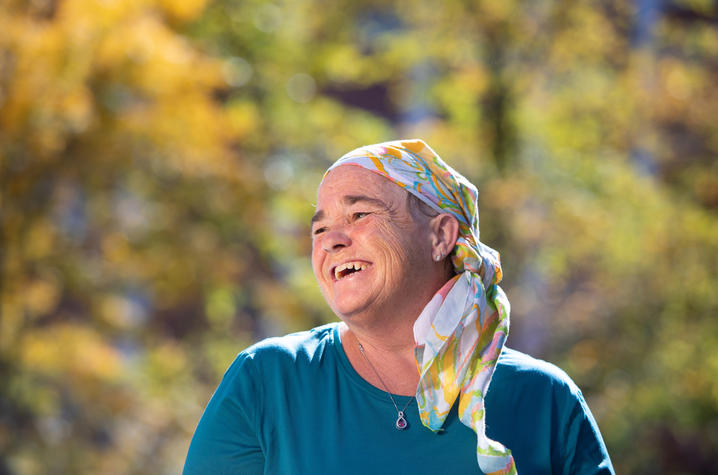 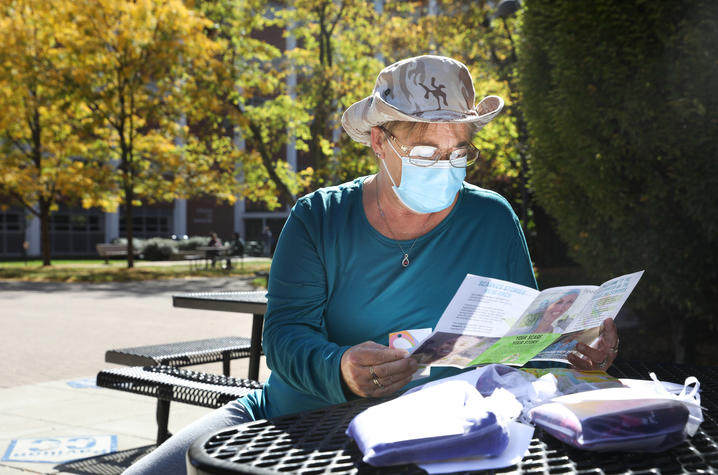 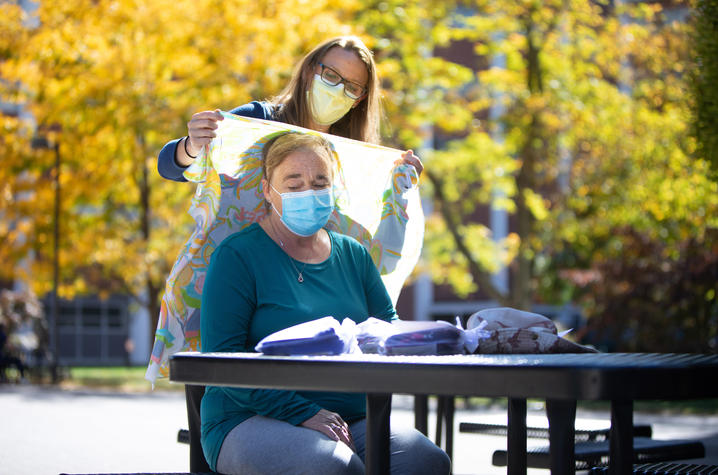 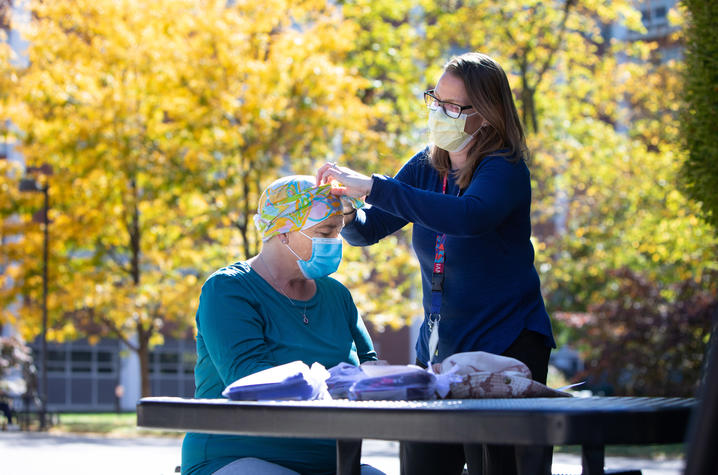 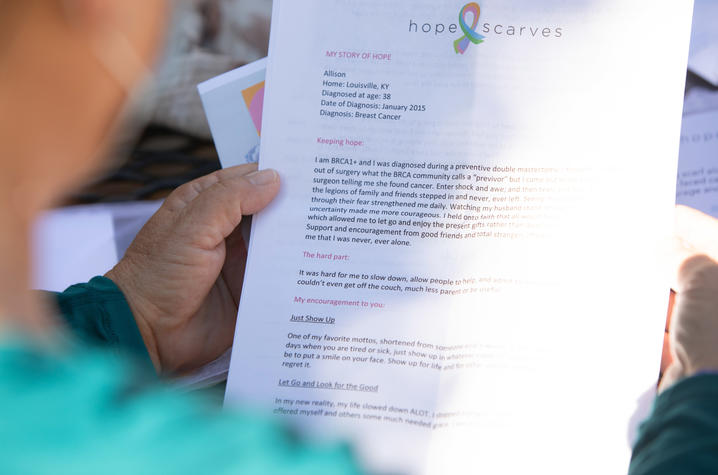 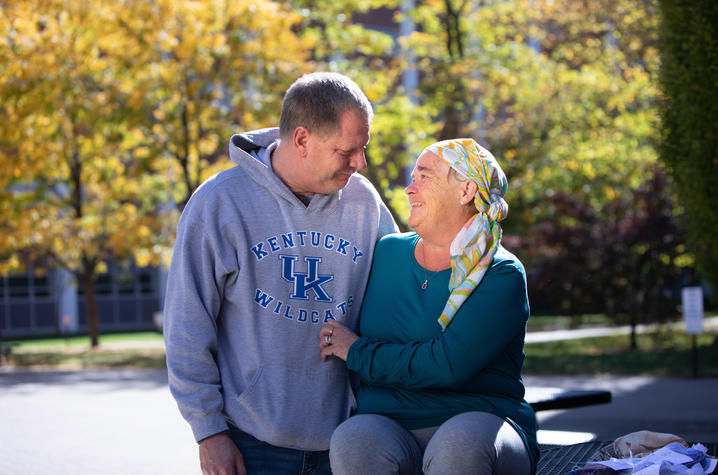 LEXINGTON, Ky. (Oct. 20, 2020) — Scarves and stories of hope are easing the paths of cancer patients at the University of Kentucky Markey Cancer Center. Hope Scarves, an international nonprofit based in Louisville, Ky., is partnering with UK Markey Cancer Center to provide a little hope and sunshine for patients facing cancer.

Affectionately known as the “The Sisterhood of the Traveling Scarves,” Hope Scarves collects headscarves, professionally dry cleans them, and sends them to people who have recently been diagnosed with cancer. For women facing hair loss during their treatment, the scarf provides practical support. All recipients, whether they lose their hair or not, receive the scarf with a story of encouragement from another person who has faced cancer.

“I was diagnosed with breast cancer when I was 30 years old and seven months pregnant,” said Lara MacGregor, founder of Hope Scarves and a Stage IV metastatic breast cancer patient herself.  “A stranger – a friend of a friend – sent me her headscarves with a simple note saying ‘You can do this.’ That simple act of compassion gave me the strength and hope at a key moment in my life. That moment was the inspiration for Hope Scarves.”

The partnership with UK Markey Cancer Center is supported by Jackson Family Wines, which provided funding for 170 scarves.

The Markey Cancer Foundation, the philanthropic arm of the UK Markey Cancer Center, partners with organizations like Hope Scarves to serve Markey patients with quality of life enhancements like this.

“We so appreciate seeing organizations like Hope Scarves providing our cancer center and our patients with this much-needed support,” said Markey Cancer Foundation Leadership Giving Officer, Kelsey Lewis. “We look forward to seeing this partnership blossom and will encourage future support of this initiative as well.”

More than 16,000 scarves have now been given to people facing more than 90 types of cancer in all 50 states and 26 countries. Scarves are shared in three ways:

- Personal requests – Anyone in active treatment can request a scarf on the Hope Scarves website.

- Gift requests – Anyone can request a scarf to be sent to a friend or family member going through treatment.

Frankfort resident Carolyn Weber was diagnosed with breast cancer this summer and is currently undergoing chemotherapy at the UK Markey Cancer Center. Though she was mentally prepared for the hair loss – cutting her waist-length hair to her shoulders in anticipation – she says the day it began falling out in earnest was still difficult to process. She requested a “bright, colorful scarf” and chose hers not just for the kaleidoscope of colors, but for the message that came with it from a previous recipient named Allison.

“I chose [this scarf] because of the story behind it,” Weber said. “It’s a beautiful thing, being able to read this woman’s story. She pulled her strength from her children. It’s a beautiful story. And I’ve got a lot to live for, too – for my husband, my son, daughter-in-law and my grandkids.”

Women are encouraged to return the scarf, along with their story of facing cancer, as soon as they are ready to do so. In that way, the scarves and stories are handed from woman-to-woman, as a show of support and solidarity.

Four years ago, Hope Scarves began partnering with hospitals to ensure that women would receive a scarf without needing to proactively seek one out at an already busy, overwhelming time. To date, Hope Scarves is partnering with 40 hospitals and medical centers in 17 states. Hope Scarves also focuses on funding metastatic breast cancer research, raising $500,000, matched 1:1 by anonymous donors, since 2016.

Sariah Edwards, a 27-year-old Lexington mother of three, has been battling T-cell lymphoma since February.  She recently received a Hope Scarf from Markey and says she tries to wear it in a different way every time she puts it on.  Her scarf came with not only a previous patient’s personal story of dealing with cancer, but also tips for how she had worn the scarf. Edwards, who says she’s hopefully nearing the end of her chemotherapy treatments, says she’s already planning what her words to the next recipient will be.

“I’ve been thinking about it a lot,” Edwards said. “And it’s really hard to put into words, but I basically want to tell her not to give up.”

Hope Scarves is an international non-profit that shares hope with people facing cancer through scarves, stories, and research. Since 2012, Hope Scarves has provided scarves to over 16,000 people ranging in age from 10 months old to 97 years old, facing over 90 types of cancer. Hope Scarves currently has 40 partnerships in 17 states ranging in size from 10-600 scarves. Hope Scarves have been requested and sent to every US state and over 26 countries around the world. Additionally, Hope Scarves has raised over $500,000 all matched by anonymous donors, for a total of $1 million for metastatic breast cancer research.

Affectionately known as “The Sisterhood of the Traveling Scarves,” the scarves and stories that come with them are tangible reminders there is light in the world. For more information, visit www.hopescarves.org, like us on Facebook, or follow us on Instagram or Twitter.  Learn more about Hope Scarves’ founder Lara MacGregor at www.MyHopefulLife.com