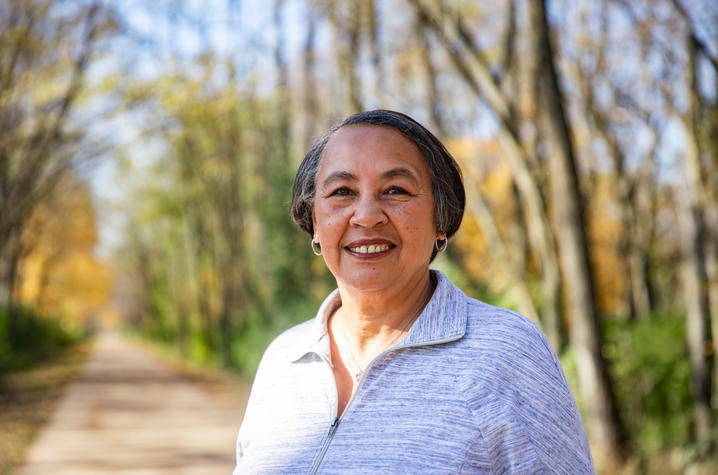 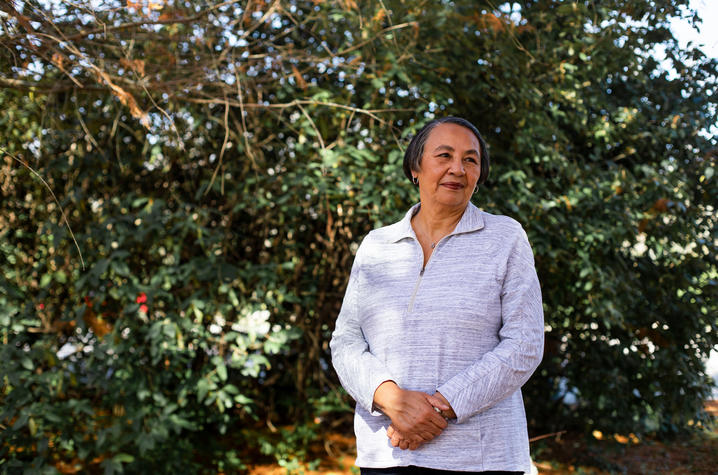 LEXINGTON, Ky. (Nov. 17, 2020) — When Lexington resident Brenda Spillman came down with pneumonia in 2016, the illness lingered in her lungs, gradually causing her to lose her breath. For three weeks, she tried over-the-counter medicines to no avail.

“Then one morning I got up, called my son, and said ‘I can’t breathe,’” Spillman said. “And he said, ‘If you don’t go to the doctor right now, I’m going to come and take you.’”

Spillman’s primary care doctor ordered a CT scan, which found two things: pneumonia, as expected, and another thing her doctor did not expect: a small spot in the upper lobe of her right lung. She sought out a pulmonologist, who decided to scan her annually to watch for signs of growth or change in the small lung mass.

“It was a small spot, and the lung doctor said that I could have been born with it, but he didn’t know for sure,” she said. “He said, ‘We’ll keep an eye on it.’”

The first two years, the spot appeared unchanged. However, after her third yearly scan, she got another phone call right after her appointment.

“They called me immediately for another test,” she said. “They told me, ‘Whatever it is, it’s growing rapidly.’”

Spillman was then referred to the University of Kentucky Markey Cancer Center’s Multidisciplinary Thoracic Clinic, where she first saw interventional pulmonologist Dr. Ashish Maskey. Based on biopsy results and the sudden growth of the spot, he suspected lung cancer, and immediately referred her to see Markey thoracic surgeon Dr. Jordan Miller that same day.

“We were suspicious that it was an early-stage lung cancer, and we felt that a surgical option would be the best way to diagnose and definitively treat it at the same time,” said Miller, an assistant professor of cardiothoracic surgery in the UK College of Medicine.

Based on the nodule’s small size and location, Miller suggested a minimally invasive wedge resection followed by possible removal of the affected lung lobe, depending on what the pathology results from the surgery showed. This surgical option removes the suspected cancerous growth for diagnosis with further surgery at the same time for definitive management of the suspected lung cancer. Spillman was ready.

Spillman’s surgery was uneventful. Once the growth was removed, tumor tissue was sent to pathology for testing and confirmed their suspicions. Spillman had a stage 1 adenocarcinoma, a type of lung cancer commonly seen in nonsmokers.

After her surgery, she spent only three days in the hospital and completed outpatient therapy on the advice of UK HealthCare physical therapists to help her regain her exercise tolerance. Though she was initially scheduled for six weeks of therapy, she completed her course in just four.

Spillman had relatives who had been diagnosed with breast and colon cancers, and says she always thought that she might develop breast cancer one day due to the possibility of an inherited genetic mutation. The diagnosis of lung cancer, however, surprised her.

“I never smoked nor drank,” she said. “But… things happen.”

While smoking is the largest risk factor for lung cancer, Miller notes that there’s been a national trend of more patients like Spillman receiving similar diagnoses.

“Nationwide, lung cancer has become more prevalent in nonsmoking females,” he said. “Here in Kentucky, we don’t see it as much, but we’re seeing a greater prevalence of these nodules in nonsmokers across the country.”

Because her cancer was found early, Spillman didn’t have to undergo chemotherapy or radiation. For the next two years, she’ll visit Miller every four months and get scanned to make sure her cancer doesn’t come back. Her prognosis is good – Miller says that the five-year survival rate for her cancer and staging is about 90%.

“As the stage of lung cancer increases, the survival decreases,” Miller said. “That’s why we want to identify it early –  it’s our opportunity to cure it.”

In 2015, the Food and Drug Administration approved low-dose CT screening for lung cancer. This screening is recommended for current and former smokers ages 55-80 who have a 30 pack-year smoking history, and it is the most effective tool available to find lung cancers in their earliest stages. For nonsmokers like Spillman, Miller says that suspicious lung nodules are often found by accident when the patient receives a CT scan for another health issue, and these nodules should be monitored closely, regardless of a person’s smoking history.

“If something abnormal is found on a CT scan, even if that person is a nonsmoker, it should be taken seriously and followed,” Miller said. “Sometimes people may think, ’I’m not a smoker, I’m healthy, and that little thing in my lung is nothing to worry about.’ But over time, that could become something that needs to be dealt with.”

Now roughly a year out from her surgery, Spillman is doing well, keeping herself busy and active with volunteer work and maintaining her yard.

“It’s just the grace of God that I’m still moving, and I do great,” she said. “I’ve just been blessed. I don’t let nothin’ get me down.”