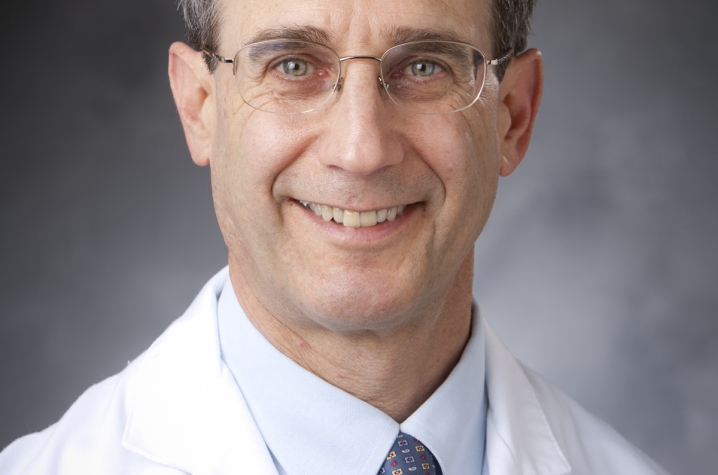 LEXINGTON, Ky. (June 22, 2015) — In a corner of Larry Goldstein's office on the fourth floor of the Kentucky Clinic sits a Captain's chair — a common sight in faculty offices everywhere. But a closer inspection of the emblem on the chair reveals the "Eruditio et Religio" motto of Duke University.

You don't see that often at the University of Kentucky.

"As the (NCAA men's basketball) tournament progressed, I was more and more fatalistic," said Goldstein, who accepted the chairmanship of the UK Department of Neurology in January. "I knew that if UK and Duke played in the final, either way, I couldn't win. The University of Western Siberia was starting to look like a better career option."

But as soon as the conversation veers away from the storied Duke-UK rivalry, he gets serious.

A highly acclaimed expert in stroke and other related neurological disorders, Goldstein comes to UK with a resolve to apply his skills and experience to propel the department — and its sister, the Kentucky Neuroscience Institute — to the next level of research, patient care, education and service.

"There is so much talent here (at UK ) already, and so much to offer Kentuckians in terms of specialty neurology care," Goldstein said.  "I hope to organize our resources in a way that maximizes the efficiency of clinical care, clinical research, and translational/biomedical collaborations at the same time we provide service and leadership for the citizens of the commonwealth."

Goldstein received his undergraduate degree from Brandeis University in 1977 and his MD from Mount Sinai School of Medicine in 1981.  He then completed his internship and neurology residency at Mount Sinai before venturing to Duke University in 1985 for a research fellowship, where rose through the ranks to become a professor of neurology, chief of the Division of Stroke and Vascular Neurology, director of the Duke Stroke Center and an attending neurologist at the Durham VA Medical Center until his arrival here last month.

Most people are drawn to Kentucky for its unique landscape.  Goldstein came to Lexington in part because of something less appealing.

"Kentuckians suffer from strokes at a higher rate than almost anywhere else in the U.S.," Goldstein said. "Since medical school, I've had a focused interest in stroke prevention, acute intervention, post stroke recovery, and systems of care."

"This seemed to be the perfect place at the right time to apply my research focus and career interests."  “When I combined this with the opportunity to work with outstanding colleagues at UK to develop programs that will make a real difference in people’s lives, I was convinced there was no better place in the country for me to work.”

Goldstein has published more than 650 peer-reviewed journal articles, editorials, book chapters, abstracts, and other professional papers.  He indicated that, “the faculty at Academic Medical Centers are in a unique position to influence public policy for the benefit of the patients we serve.” As a member of the American Heart Association National Spokesperson panel and past national chairman of the AHA Advocacy Committee he is a noted voice in educating the public, medical professionals and policymakers about stroke and cardiovascular disease.  By helping to promote the AHA’s adoption of stroke as one of its primary missions, Goldstein assisted with the AHA's initiation of the development of stroke centers and the Get with the Guidelines-Stroke program. He has also supported the specialty of neurology nationally through work on several committees of the American Academy of Neurology.

Goldstein has won numerous awards, including the AHA’s Chairman’s Award, its National Volunteer Advocate of the year, the Stroke Council Leadership Award and the Feinberg Award for excellence in stroke. He has been awarded more than 15 million dollars in grant support throughout his career studying cerebrovascular disease, pharmacological approaches to recovery after stroke, motor recovery, and mechanisms of behavioral recovery after focal brain injury.

His clinical and research interests are complemented by his commitment to educating the next generation of neurologists, and he is particularly proud of his several teaching awards. To that end, Goldstein hopes to enhance programs at UK that foster faculty career development and enhance the Department’s educational programs.

“Dr. Goldstein brings to the university a great balance of clinical experience and research expertise,” said Dr. Frederick C. de Beer, dean of the UK College of Medicine.  "His interest and skill in the area of stroke is particularly relevant to our patient population, since cardiovascular events, including stroke, occur at such high rates."

“I am thrilled to be at UK and to have been given the opportunity to work with outstanding colleagues to continue to help build what I am convinced will be one of the best neuroscience programs in the country,” Goldstein said.