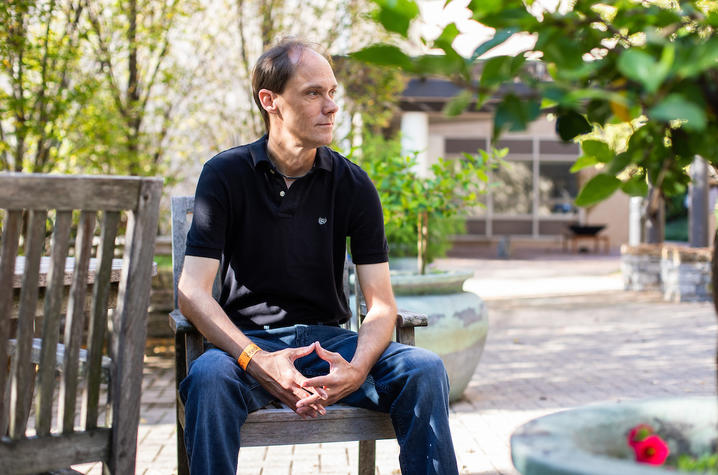 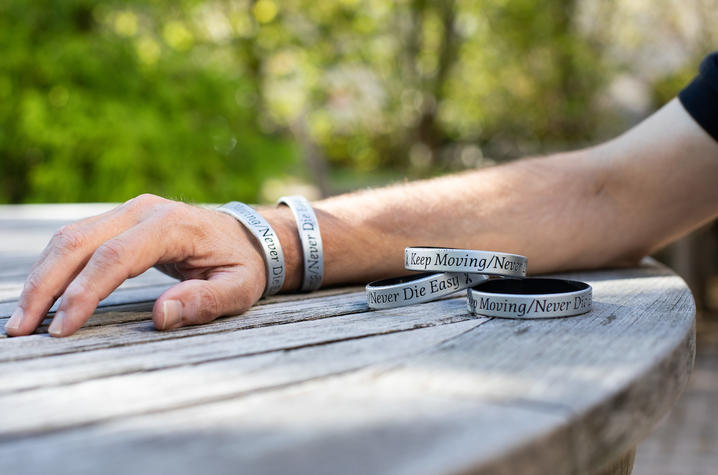 LEXINGTON, Ky. (Nov. 1, 2021) — When Scott Kindred felt a lump in his upper right shoulder, he knew something was wrong.

As a patient care technician at UK HealthCare, he has enough medical knowledge to know when he should listen to his body. He mentioned it to Timothy Mullett, M.D., a thoracic surgeon he worked with, who ordered a PET scan. The imaging revealed a mass on Kindred’s upper right lung

This was in 2014, and after surgery to remove part of his right upper lung, Kindred and Mullett were hopeful that no further treatment would be needed. In 2016, he was lying in bed when he felt “something poking me in the back rib.” He followed up again with his surgeon, where another scan revealed not only had the cancer returned, but it had also spread to his upper and lower spine, pelvis and ribs. It was stage 4 lung cancer.

“I was referred to an oncologist who said I had about six to eight months without treatment,” Kindred recalled. “They recommended I start chemotherapy, but something inside me was screaming not to do it. I told her ‘It’s immunotherapy or nothing.’ I still had things to do and things I wanted to see.”

Kindred’s family was concerned that he turned down chemotherapy. Immunotherapy wasn’t covered by his insurance, but he was sure it was the right course for him. In the meantime, he started radiation treatment until his oncologist conducted some tests to see if his cells would respond to immunotherapy. They did, and after several radiation appointments, he was enrolled in the pharmaceutical company’s payment assistance program and taken on as a patient.

Throughout the first year after his initial diagnosis, Kindred continued to work in the post surgery care unit, but was restricted to light duty. He chose to stop working altogether so he could focus on himself and his health. He experienced several side effects from his treatment — for example, he could no longer tolerate peanuts, one of his favorite snacks. He found that adjusting his habits helped, the side effects abated, and he was able to better tolerate his treatments.

“My knowledge from working in the medical field for as long as I have is always very helpful,” said Kindred. “I know my body very well and it’s important to have discussions with your doctor.”

During this time, Kindred searched for a lung cancer support group. He knows enough to advocate strongly for himself and be involved in his own treatment plan, and he wanted to help others do the same. When he didn’t find one in Kentucky, he made his own — Stages.

“Calling it 'Stages' fits,” he said. “There are stages for everything — life, cancer, recovery and grief.”

Inspired by a trip to Pawleys Island, South Carolina, Kindred also implements the imagery of a pier into to the group.

“The way I envision it, the pier is long, and it sits on many pillars as it reaches out into the ocean. This support group is like a pier, and each pillar represents a person, reaching something that is otherwise unreachable. Just one pillar can’t hold up a pier. It takes all of those pillars working together.”

Due to the pandemic, Stages has gone virtual, supported by the staff at the University of Kentucky Markey Cancer Center. Even though they can’t meet in person, Kindred and others gather to talk about their cancer journeys, their treatment and even swap helpful tips and tricks.

“For example, I was dehydrated after each infusion, so I asked my oncologist if I could have a liter of fluid while I was getting my infusion,” Kindred said. “It helped, so I mentioned it to another patient who was having the same problem and suggested they ask their doctor.”

Stages is open to anyone diagnosed with or recovering from lung cancer. The group meets virtually once a month.

Kindred is currently in remission, and he still goes regularly for scans and checkups. He had wrist bands made that he gives freely to any cancer patient who needs one. They read “keep moving — never die easy”.

“I’m super lucky, blessed, whatever you want to call it,” Kindred said. “Being stage 4, you don’t walk away. Someone described me as being in uncharted waters. So many patients were prescribed chemo, but I didn’t feel it was right for me.”

Stages has given Kindred a renewed purpose; he wants to go beyond helping current cancer patients, but also to advocate for regular screenings to help people catch their diagnosis early.

“I found strength by working with patients, and sometimes sharing a little bit of my story,” he said. “They light up when they see me and know that I’m also a stage 4 and that they might have a chance. I find energy in laughter and by helping others. If something were to happen to me, I would like Stages to continue.”

Stages meets the third Tuesday of every month from 5:30-7 p.m. Additional information on the group, including the Zoom link, is available here; you can also follow the Stages Lung Cancer Support Network on Facebook.

For more information on lung cancer screening and how to make an appointment, visit the UK Markey Cancer Center's Lung Cancer Screening Program.