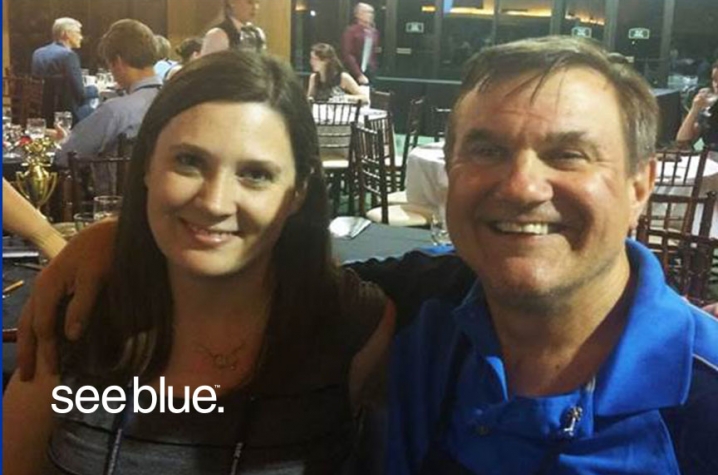 LEXINGTON, Ky. (July 25, 2016) — In ivory towers all over the world, experts ponder the factors that foster career success and overall well-being in their college graduates.

Gallup tried to answer the same question. In a 2014 poll of more than 30,000 graduates, the polling juggernaut tried to find connections between the college experience and long-term career and personal "wellness." In other words: did graduates feel they had achieved personal and career success? And if so, what college experiences contributed to that?

What the poll found was that the three most powerful elements linked to long-term success for college grads were about emotional support: Did they have a professor who made them excited about learning? Did their professors care about them as a person? Did they have a mentor who encouraged them to pursue their goals? If graduates strongly agreed with these three things, it doubled the odds that they were engaged in their work and thriving personally.

Jenna VanRooyen knows this first-hand. In Professor Sasha Rabchevsky's lab at  the University of Kentucky's Spinal Cord and Brain Research Center (SCoBIRC), mentoring is a group affair, and Jenna – and her research – have benefitted hugely from the experience.

VanRooyen came to UK in 2011 from Texas. The UK Interdisciplinary Biomedical Science Program to which she was admitted required a rotation through four different labs. Her first rotation happened to be in Rabchevsky’s lab.

"After my first rotation with Sasha, I knew that was where I wanted to be. His excitement about his work in neuroprotection and repair after spinal cord injury is infectious."

Consequently, VanRooyen was offered a graduate studentship in the Rabchevsky lab – but it came with a challenge. The research project offered her was high-risk/high reward – a tough proposition for a young graduate student.

"To my knowledge, no one else anywhere is looking into this idea for spinal cord injury," Rabchevsky said. "Students don't want to graduate based on negative data, so Jenna's willingness to work on something completely novel is a testament to her tenacity."

The project explores the therapeutic possibilities of transplanting healthy mitochondria into injured spinal cord tissue. Colonies of mitochondria reside in every one of our cells, functioning as a sort of battery to power various cellular functions.  When enough of them are damaged, the cells die. VanRooyen would be looking into whether transplanting mitochondria into the injured spinal cord could reduce or repair damage, promoting long-term functional recovery.  Put more bravely: could this help prevent paralysis?

"I was given the lead with full creative freedom to explore this hypothesis," VanRooyen said. "It was scary and exhilarating all at once."

Luckily, VanRooyen was in the right place at the right time. Rabchevsky had explored microglial transplantation into spinal cord tissue after injury and Samir Patel, a research assistant professor and a member of Rabchevsky's lab, had vast experience in mitochondrial function. VanRooyen could use their merged expertise to help complete the project. Other SCoBIRC faculty had relevant experience that further informed her work.

"Sasha's mentoring style is based on open communication, clear expectations and a supportive environment.  He reminds me that it's OK to fail and he knows when to push and when to help me up in those situations," she said.

"There's a lot of distraction when you're not sure where the science will lead you. Each answer raises four new questions. Sasha helps rein me in and think about the logical next step in the experiment."

VanRooyen adds that Patel has done quite a bit to mentor her as well.

"I get direct mentorship from Sasha, but Samir is guiding me through a lot of the experimental aspects of my training," she said. "I credit him for much of what I've learned in that area."

According to Rabchevsky, Jenna is disciplined, patient, and willing to listen to others to gain insight into her own work, all qualities that strengthen her potential as a successful scientist.

Her efforts have recently earned her a Ruth L. Kirschstein National Research Service Award from the National Institutes of Health. The grant is intended to foster career development for young scientists.  There must be "sound science" in the grantee's application, but the grant also requires that there be resources in place to help the student learn the other skills required for success as a scientist, including hypothesis development, experimental design and analysis, manuscript/grant preparation, and presentation/defense skills. Rabchevsky's mentorship style suits the award – and VanRooyen – perfectly.

"I've always ascribed to the philosophy of 'See it. Do it. Teach it,'" Rabchevsky said.  "Sharing my learning and experience with everyone in the lab from top to bottom sparks collaboration and fosters creativity. It doesn't matter where you sit in the hierarchy. In my lab, everyone can contribute and everyone can learn."

Clearly, VanRooyen's experience in the Rabchevsky lab has paid off. Her poster, presented at the National Neurotrauma Society's (NNS) annual meeting last month, garnered the Michael Goldberger Award – the top honor in the trainee poster competition.

Since its inception in 1982, the NNS symposium has served as the premier forum for the exchange of ideas and information related to traumatic brain and spinal cord injury. Fortuitously, this year's symposium was in Lexington, which meant that many of her colleagues were in attendance.

"There were more than 300 posters submitted, and Jenna was one of the top 20 posters selected to showcase her work. The fact that she got top honors with competition from places like Washington University, Drexel, Penn and UVA speaks volumes about her skills," said Rabchevsky.

"It felt like forever as they read through all the awards," VanRooyen remembers.  "When they got to the last award, I thought to myself, 'well, it's all or nothing.' Then they called my name, and all the SCoBIRC people made quite a ruckus in the back."

Rabchevsky, who mentors seven students plus lab techs, is particularly impressed with Jenna's growth as a scientist.  "I think she can write her own ticket," he boasts of her. "I wish we could take more credit, but this is truly her accomplishment."

Jenna mirrors Rabchevsky's words.  "If I didn't have this time in Sasha's lab I would not be where I am today."