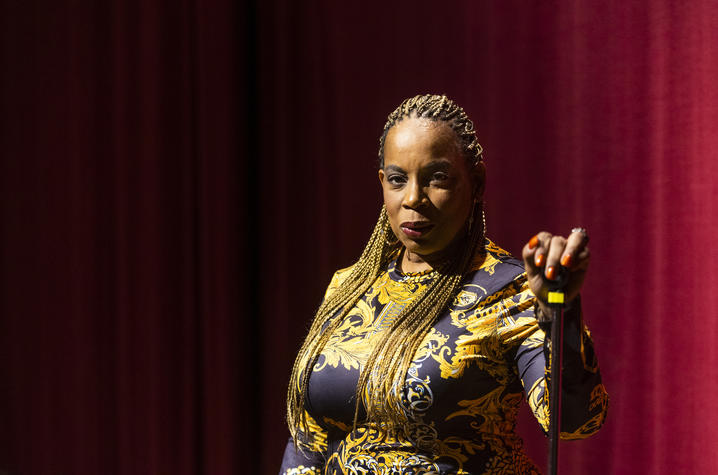 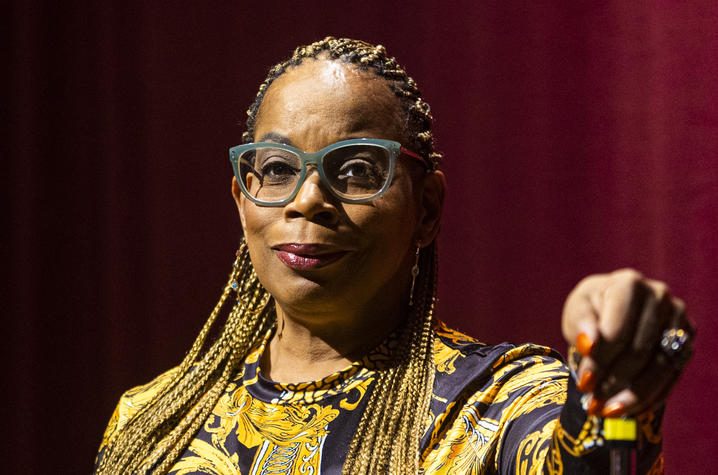 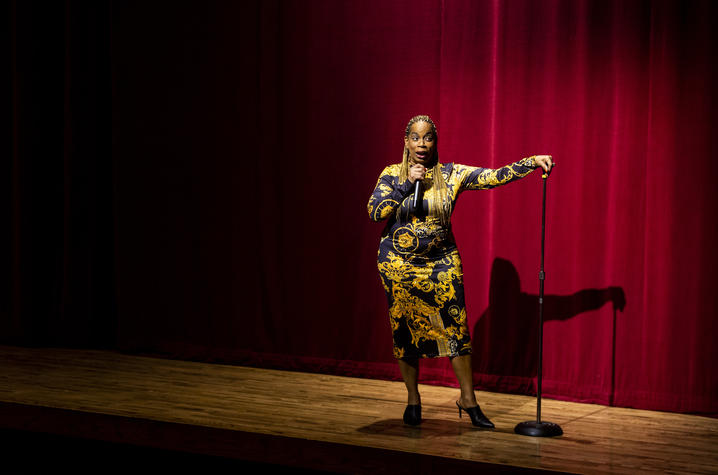 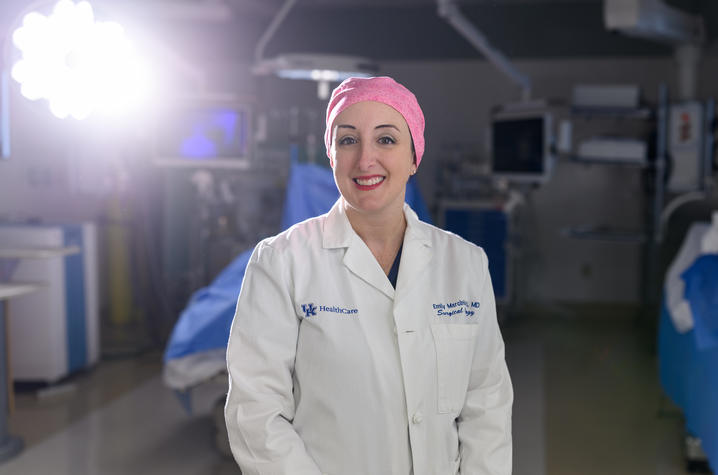 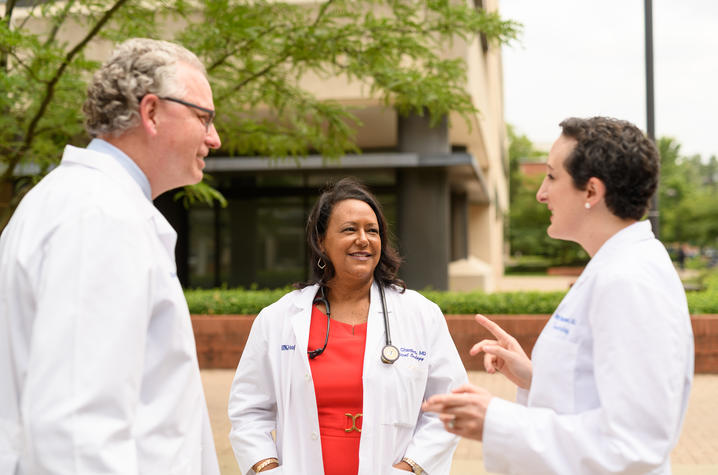 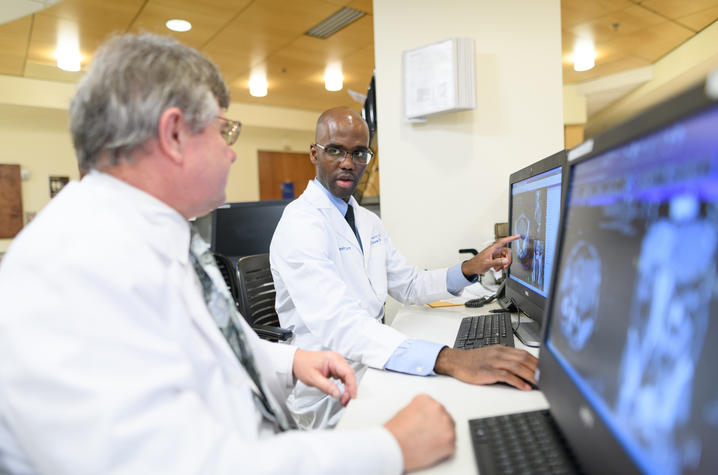 LEXINGTON, Ky. (Oct. 28, 2022) — As a stand-up comedian, Debra Faulk is an expert at transforming the most difficult and uncomfortable moments of her life into something that lifts others.

Active in the local comedy scene, the 54-year-old Lexington native uses standup as a platform to shine a light on serious health issues, with much of her routine inspired by her family’s experiences: one sister dealt with intellectual disabilities while another had breast cancer, her brother served in Desert Storm and came back with PTSD, her father had dementia, and her mother was on dialysis.

“This is all under one roof,” she said.

Faulk’s family experience combined with her comedic talent has given her the unique ability to connect with others on topics that can be difficult to talk about.

“Throughout my life I’ve used my experiences as a caretaker, a family member, and a friend of people with health conditions to encourage, inspire and inform others through laughter,” Faulk said.

After her breast cancer diagnosis in 2021, Faulk is now using the stage to spread awareness through the perspective of a cancer survivor.

Faulk spent many years in Los Angeles as a professional stand-up comedian and actor before moving back to Kentucky to continue her theatrical work. In addition to stand-up comedy, she currently serves as one of Lexington’s Civic Artists in Residence and works with Kentucky Humanities portraying Nancy Green, the Kentucky activist, philanthropist and missionary whose likeness became known as “Aunt Jemima.”

Faulk has strong ties to the University of Kentucky: in 2007, she earned a bachelor’s degree in theatre and has served as a guest lecturer and adjunct professor in the College of Fine Arts’ Department of Theatre and Dance.

Faulk’s UK connections now include getting her care at UK HealthCare. In 2021, her annual screening mammogram detected a small mass in her right breast. After a follow-up ultrasound and biopsy at UK Markey Cancer Center, she got the news that it was stage 1 breast cancer.

Faulk says the diagnosis was especially difficult given her family experience with breast cancer. Her grandmother, aunt and sister all had the disease. Her sister passed away at only 33 years old.

“I thought I was going to die. All I kept thinking about was everyone on my mother's side who had breast cancer,” said Faulk. “I figured, ‘I’m on my way out. Let me give everything away to the people that I love.’ And that's what I started doing. I started to pack up my belongings and say goodbye.”

At UK Markey Cancer Center, Faulk met with surgical oncologist Emily Marcinkowski, M.D., who would operate on her and guide her through treatment. Marcinkowski explained that her form of cancer was highly treatable.

Faulk had triple-positive breast cancer, which is driven by hormones progesterone and estrogen and the HER2 protein.

“The HER2 protein promotes growth of cancer cells, which makes her cancer more aggressive,” said Marcinkowski. “At the same time, it provides a target for treatment so there are very effective therapies. Faulk’s cancer was also caught early, so her prognosis was very good.”

That month, Faulk underwent a lumpectomy, surgery to remove the cancerous tissue from her breast.

After the procedure she was considered cancer free, but would need to have chemotherapy and radiation therapy to reduce the risk of recurrence. Faulk’s treatment care team at Markey included medical oncologist Mara Chambers, M.D., and radiation oncologist Mark Bernard, M.D.

Faulk’s chemotherapy treatments began in April. She received a combination of Taxol and Herceptin, medications that reduce the recurrence of early stage breast cancer. After chemotherapy, she underwent a month of daily radiation therapy treatments, which ended in October.

Herceptin, which targets the HER2 protein, is one of many cancer therapies that can have harmful side effects on the heart. When Faulk began to develop side effects from the medication, she was referred to Amit Arbune, M.D., a cardiologist with UK HealthCare’s Gill Heart & Vascular Institute who specializes in treating cancer-induced heart problems.

Faulk took a break from the Herceptin, and Arbune started her on cardioprotective medications that improved her heart function. This allowed her to get back on chemotherapy and complete her full course of treatment without further heart complications.

“It was reassuring to have a cardiologist work hand-in-hand with my Markey oncologists to develop a plan to destroy the cancer while saving my heart," Faulk said.

Faulk worked hard to stay strong throughout her treatment course, which was physically and emotionally taxing.

“I didn’t want to tell people I was tired and in pain from the side effects. I just tried to fight through and keep going strong so that I didn’t look sick,” Faulk said. “I just focused on ways I could turn my situation around into something positive for others.”

Faulk’s positive energy — and fashion — made her a recognizable presence at Markey throughout the course of her breast cancer treatment.

“I made a point of dressing up for all my appointments. I tried to have fun with it,” Faulk said. “When I lost my hair due to chemo, I started to wear extravagant hats. Everyone knew me for them. I had one that was supposed to be worn to a funeral, and I rocked it. I bedazzled it all out.”

Faulk also had a way of connecting with other patients in the waiting room and her care team in the clinic.

“I just saw other people who needed to be lifted up,” Faulk said. “We’d start talking about something other than why we were there. I’d tell a joke or a story to get their minds off a difficult situation, even if it was just for a moment.’”

Faulk had more positive news during her course of treatment. Genetic testing showed that she did not have BRCA gene mutations, which raise the risk of getting cancer again. The results also meant that her cancer was not hereditary, even though three close relatives had breast cancer.

Faulk now plans to use her story to spread awareness about the importance of annual mammograms, particularly among Black women, who are 40% more likely to die from breast cancer than white women, even though the incidence rate is about the same. This likely reflects the fact that fewer cancers are diagnosed at an early stage, due to factors including less access to and higher levels of mistrust toward health care.

“I saw it happen with my own family and many other women within our community,” she said. “Getting screened saved my life. I hope my own experience can draw awareness to the importance of getting your mammogram every year and that there are resources available to help.”

She also plans to offer support to other patients and survivors through comedy.

“Patients need to know that they are their own best advocates,” Faulk said. “They need to make certain their voices are heard. At the same time, it’s ok to ask for help. Take advantage of all the services available to you.”

Ultimately, she hopes that sharing her experiences can help others in a similar place find the light in dark situations.

“I hope for survivors, my story inspires them to take difficult situations and turn them around into something that can do good,” she said. “I’m glad I found out in time to save myself, so that’s what I plan to do.”