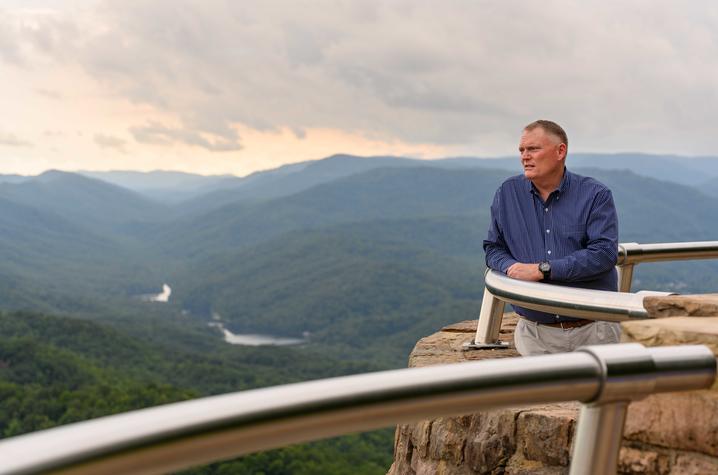 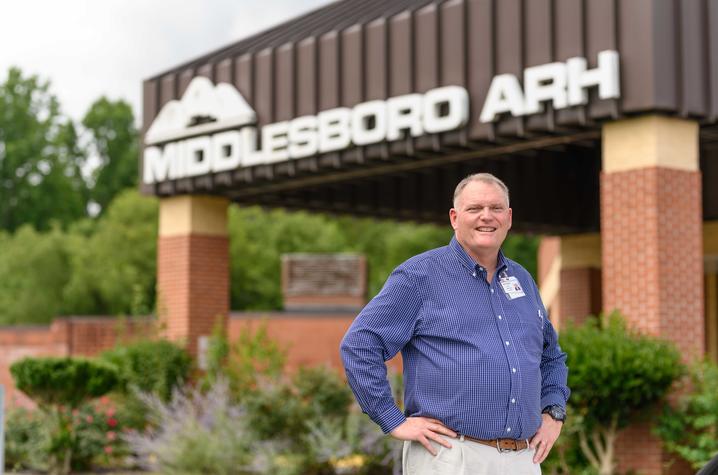 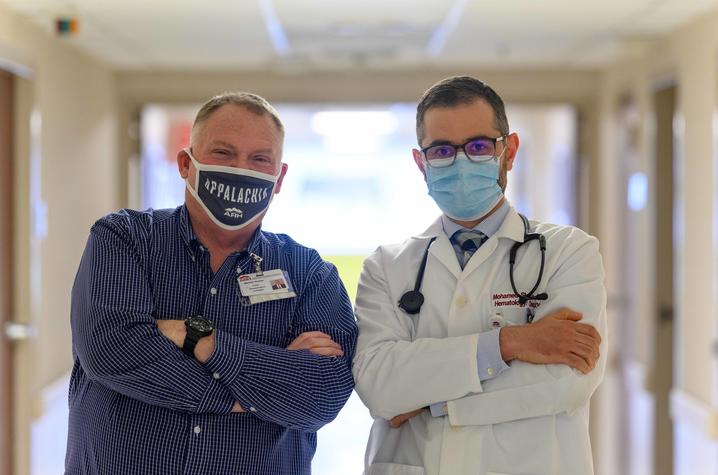 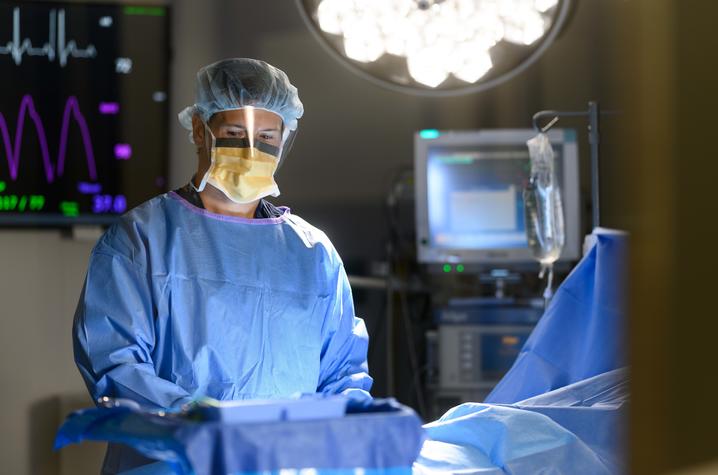 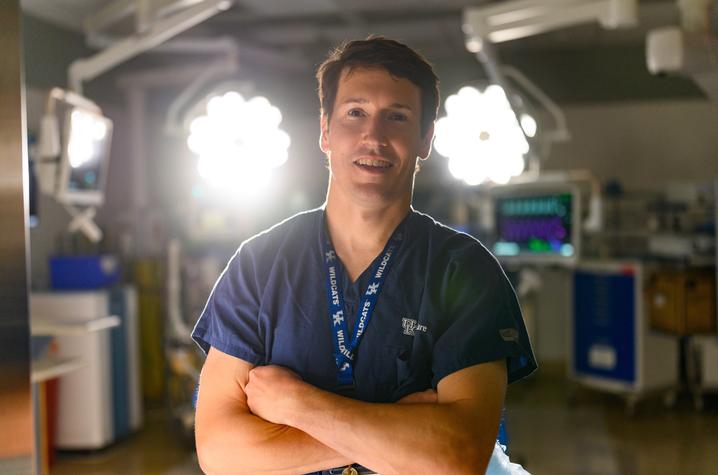 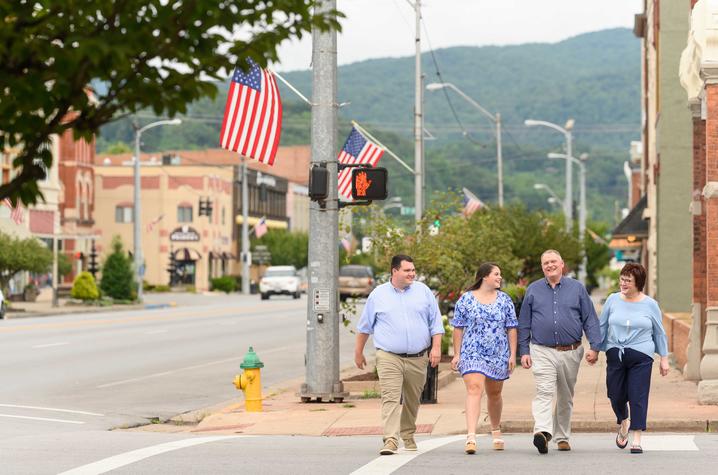 LEXINGTON, Ky. (Aug. 24, 2020) – Kidney stones are infamously painful. Even at their tiniest size, these mineral deposits can wreak havoc as they exit the kidneys, leading to the type of breathtaking pain that’s often compared to the experience of giving birth.

But for Middlesboro resident Michael Slusher, that pain turned out to be a wake-up call for something much more serious.

“I’m probably the only person who says, ‘Thank God for a kidney stone,’” he said. “Because it discovered my kidney cancer before it metastasized.”

The CEO of Middlesboro ARH Hospital, Slusher was leaving work in early February when he began experiencing persistent pain in his abdomen that he initially thought were caused by his gallbladder. He didn’t make it home, instead turning right around and heading straight for the Emergency Department at Middlesboro ARH.

A CT scan showed stones in both kidneys – and a 7-centimeter mass in the left kidney. Followup testing showed that the mass was malignant. Having lost both of his parents to cancer, he was immediately worried about the implications of this diagnosis.

“Both of my parents died young of cancer – my mother was 55; my father was 68,” Slusher said. “So when I got my cancer diagnosis, it was scary. I want to walk my daughter down the aisle. I want to hold my grandkids.”

Slusher faced major surgery to remove the mass. He wanted his surgery to be performed laparoscopically to reduce his recovery time, and when given referral options by local urologist Dr. Seymour Kilstein, he chose the University of Kentucky Markey Cancer Center.

“When I was offered a choice, I knew where I was going without a moment’s hesitation,” he said. “As part of the affiliate network, I had taken a group of doctors up to Markey for an orientation before I ever had my surgery. I’ve been to UK several times and my daughter has had surgery there, so I’m very familiar with UK and knew what to expect going in.”

“We see a lot of patients with kidney cancer,” James said. “And most cases are asymptomatic and are found incidentally – like in Mr. Slusher’s case, found on scans or an evaluation for something else.”

Prior to his surgery, Slusher’s case was taken before Markey’s Genitourinary Multidisciplinary Tumor Board, where new solid tumor diagnoses are reviewed. This Board comprises a number of experts at Markey, including medical oncologists, surgeons, radiation oncologists, pathologists, and radiologists who meet regularly to discuss each case. These specialists bring their own expertise to discuss the available options and ultimately make a recommendation for the best course of care for that patient.

Even though Slusher’s case was fairly straightforward, James said there’s value in bringing each new cancer case in front of the Tumor Board to ensure all treatment possibilities are considered by a multidisciplinary team.

“I think it’s a great thing,” James said. “All new cases are reviewed there, and things may change upon our review. We’ve had times where, say, the pathology has been different, and that’s opened up other options for patients.”

In late February, Slusher came to Markey for his pre-op visit with James. Due to the size and location of the tumor, the entire left kidney would need to be removed. On March 10, he underwent a left laparoscopic radical nephrectomy with James. And just a little more than 24 hours after the procedure, he was able to return home to recover.

“I was almost back to normal within two weeks, and was back to work within three weeks,” Slusher said. “So I’m very pleased with the care I got from Dr. James. You really can’t even tell that I had surgery on March 10.”

“Laparoscopic surgery is a great way to go,” James said. “It’s not always an option, but it is possible in a lot of patient situations. Most patients leave after one night, and they have smaller incisions, less pain and less time in the hospital.”

Because his pathology came back with negative margins – meaning all the cancer was successfully removed – Slusher’s case didn’t require further treatment after his surgery. But he says Shanshal is working with James to see about having him join a clinical trial for immunotherapy as an extra precaution, with the hopes of preventing any potential cancer recurrence. Any followup or additional care he might need can be provided right in his hometown from Shanshal, with guidance from James as needed.

It’s the way the Markey Affiliate Network was designed to work – keeping patients as close to home as possible for their treatment, with trips to Lexington only necessary when the patient requires more complex care (such as a laparoscopic surgery). Slusher notes that the decision to join the Markey Affiliate Network last year was a “blessing” and he’s seen firsthand how the relationships between local and Markey providers can elevate patient care. While Lexington is a bit further away than Knoxville – the next-largest city nearest to Middlesboro residents – he says the slightly longer trip is worth it.

“We’re in a relationship business; that’s what health care is all about,” Slusher said. “And that’s the value of the network affiliation between Middlesboro ARH and UK – it’s those relationships. If Dr. Shanshal picks up the phone and calls Dr. James, he’s going to answer. Whereas if Dr. Shanshal is calling someone he doesn’t know, you’re not sure when you might get a call back.”

And it’s the relationships he has with his team at Middlesboro ARH, he says, that make his current job so enjoyable. After working in metropolitan cities like Chicago and Cleveland and with smaller community hospitals in his home state of Ohio, Slusher took the job as CEO of Middlesboro ARH, where he’s been for more than a decade. Moving to Appalachian Kentucky was a homecoming of sorts, as both he and his wife have strong family ties to Eastern Kentucky, and he says there’s nowhere else he’d rather be.