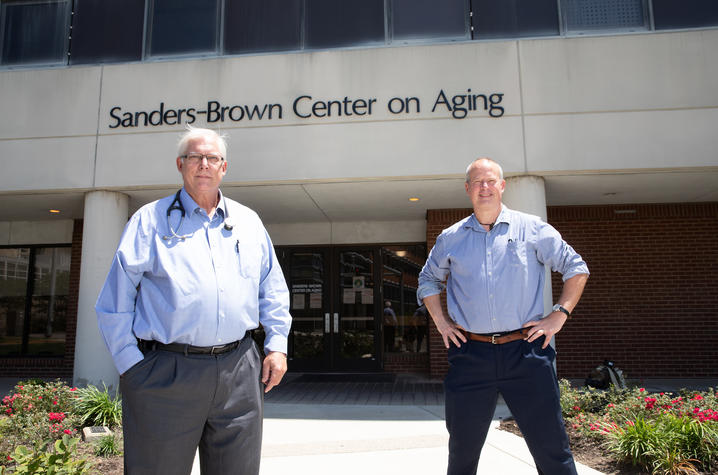 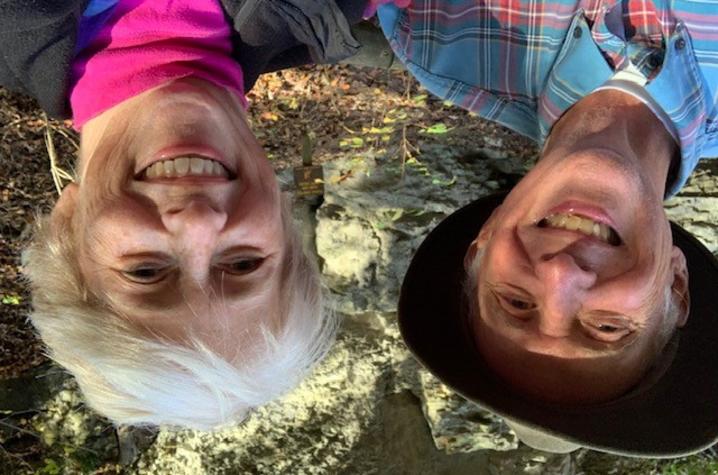 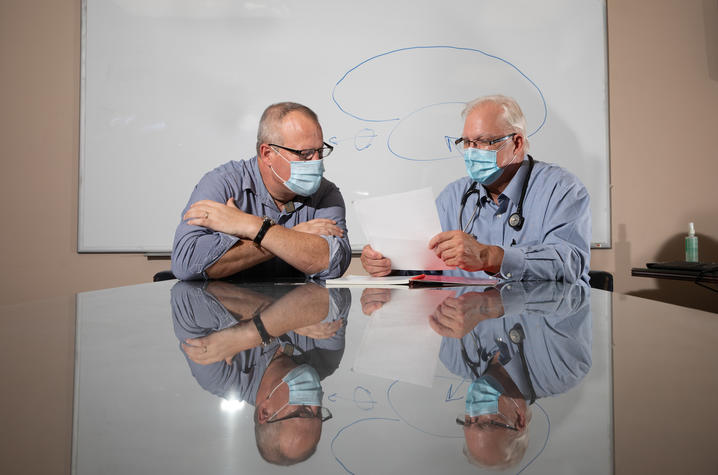 LEXINGTON, Ky. (March 16, 2022) — The motivation driving the work of Pete Nelson, M.D., Ph.D., is personal. His grandmother, Sylvia Becker, died with Alzheimer's disease, and he says his mother then grew terrified of developing the disease.

“It gives me purpose in life to attack that,” Nelson said. As an experimental neuropathologist at the University of Kentucky’s Sanders-Brown Center on Aging, he is guided by that motivation. “It is most every researcher’s dream to help identify and classify a disease, and then to go on and help beat it.”

Nelson, who is the R.C. Durr Foundation Chair in Alzheimer's Disease at UK, accomplished the first part of that dream back in 2019, when a group of international researchers, co-chaired by Nelson, discovered a new form of dementia named limbic-predominant age-related TDP-43 encephalopathy, more commonly known as LATE.

Symptoms of LATE mimic Alzheimer’s disease by causing memory loss and problems with thinking and reasoning in old age. But researchers found the LATE-affected brain looks very different from the Alzheimer's brain.

Now a couple of years after this discovery, Nelson is working towards the second part of the dream, with the world’s first clinical trial for LATE officially underway by his colleagues at the University of Kentucky.

Greg Jicha, M.D., Ph.D., is director of clinical trials at Sanders-Brown and leader of one of the best clinical dementia teams in the country.

“Our collaboration with the basic scientists as always is key. We couldn’t have done this without Dr. Nelson's discoveries,” said Jicha. “For the first time ever, we are looking at folks participating in our research who we think are heading down the path of Alzheimer’s, but now by checking simple blood tests and sometimes spinal fluid, we may be able to say while it looks like Alzheimer’s symptomatically … it is actually LATE.”

Ned and Lu-Ann Farrar were married in 1984. They’ve done many things in their nearly 40 years as a team, including raising two children while both pursuing meaningful careers. Most recently, their teamwork has been focused on Ned's health.

In 2018, after retiring from teaching orchestra in Fayette County Public Schools, Ned was diagnosed with Alzheimer’s disease. He took part in an earlier study at Sanders-Brown and was in the evaluation process for another when they refined his diagnosis to LATE, which Nelson and his team had just discovered.

“I asked Dr. Jicha if this was good news or bad news and he told us that anytime someone tells you your brain is not full of beta-amyloid, that is a good thing,” said Lu-Ann.

Jicha then told the Farrars that there were plans in the works for a trial regarding LATE and that he would keep them updated. About three months ago, they got the call.

“Ned is research subject number one, which is pretty exciting,” said Lu-Ann.

The Farrars have called Lexington home for decades now, and they say it is truly a blessing that the place making these groundbreaking discoveries and then advancing them towards a potential treatment is right in their backyard. Sanders-Brown not only helps evaluate and treat Ned, but they also give LuAnn guidance by providing honest, knowledgeable and compassionate answers.

“I’m not a researcher, but I am pretty sure you can’t fix something if you don’t know what it is. Research and clinical trials may seem like the long road, but it is so foundational to real, effective treatments,” said LuAnn. “Their commitment to curing these diseases is profound, evidenced by the work they do every day, including thoughtful consideration of Ned and his diagnosis and his treatment options.”

LATE is a disease estimated to impact 40% of people over the age of 85. Jicha says the medication in this research study may slow or perhaps even stop LATE in its tracks as a disease-modifying therapy.

The discovery of LATE, which has led to this trial, is crucial to their overall fight to help people with their memory.

“The issues of end-stage dementia, memory loss and mild cognitive impairment are largely incurable, and it is not just all about Alzheimer’s disease,” said Jicha, who holds the Robert T. & Nyle Y. McCowan Chair in Alzheimer’s at UK. “It is about many different diseases and understanding that complexity helps us to move forward with medicines that don’t just put a band-aid on memory, but instead actually begin to target the root of the problem.”

As with many diseases related to aging, people often ask, “Why did I come down with this? Why me?” Jicha says in most cases, it is a combination of things. There can be genetic factors that predispose the individual to developing dementia, hence why some diseases can be seen running in families.

There can also be environmental factors. Identifying those risk factors can help doctors understand what is happening in the brain at the cellular level and then potentially find a medication that already exists that influences the disease course — which is exactly what is happening with the research on LATE.

“The genetic discoveries by Dr. Nelson in his lab have shown us that there is a key element of potassium channel that allows nerve cells to either be healthy or diseased,” said Jicha.

Based on that knowledge, they identified a drug already used around the world, except in the United States, where it is not yet approved. The medicine has been used for quite some time for heart conditions and researchers at UK believe it could slow or even stop LATE dementia.

It has been a complex process to bring a drug not yet approved in the United States into the country. Jicha and Nelson are both gratified to say that, thanks to the support of an anonymous donor, the medication is finally at UK for their participants who appear to be at high risk for LATE.

Advances in science and treatments are not possible without research volunteers like Ned Farrar. Through the years, researchers at Sanders-Brown have been blessed with thousands of such volunteers, and hope to continue bringing in new participants who are interested in knowing if they are at risk.

“This is the best place to do clinical trials in the country,” said Nelson, who is thrilled to know this stage of his LATE discovery is in the very capable hands of Jicha’s team at UK. “Some research volunteers are going to be at risk for Alzheimer’s disease and they have options, there are also other people who are going to be at risk for other diseases, and they have very few resources in the whole world, but here they have an option. That is extraordinary.”

For those who are believed to be at risk for LATE, UK is now the only place in the world where providers can do something about it thanks to this trial. Participants in the 2-year study are required to do a clinic visit about every three months. During those visits, clinical trial participants go through memory and thinking tests and receive their study drug dose. As with all studies, there is a placebo.

While the Sanders-Brown volunteer cohort is among the most robust in the country, more research volunteers are needed.

“We need to get more people in line,” said Jicha. “Especially people beyond age 75. We are looking for the person who might have scratched their head every now and then and said, ‘Am I developing a memory problem?’ [We’re looking for] people even with mild memory problems that remain engaged in their daily activities; people who use their GPS a little bit more or are having to write everything on their calendar. These are the kind of people we want to get to because that is where we can make the most impact.”

Both Jicha and Nelson note how crucial it is to be proactive once you notice changes, even if it seems very minimal.

“Let us help figure out why, because once we know why, it doesn’t really matter what the cause is … we have things to offer you that can help,” said Jicha. “The earliest we can get to folks to stop the process the more of the brain we can save and that is just critically important.”

Nelson believes even those at risk for LATE who receive the placebo during the trial will be better off for participating because of the care of Dr. Jicha, who Nelson jokingly refers to as “Dr. Vitamin J.”

“He has an eight-month waitlist outside of clinical trials – there is a reason for that,” Nelson said. “He is one of the best neurologists in the world. Everybody in this trial –  whether they get a placebo or the drug  – they get Dr. Jicha.”

This new clinical trial for LATE is a perfect example of the collaboration that goes on at UK, how Sanders-Brown is a worldwide leader in Alzheimer’s and dementia research, and how the researchers share a common link as teammates.

“We are all fighting these horrible diseases, and they are a great enemy to have because they are so bad,” said Nelson. “For me, it is a spiritual thing. This passion is shared by others here at this center. We really care. This is our common ambition. If we could just start beating these diseases one after another … what a life well-spent that would be.”

That goal is also shared by those volunteering to participate in research.

“How awesome would it be if a patient at Sanders-Brown would be the first person to be rid of dementia?” said Lu-Ann Farrar. “That is almost beyond belief. Ned and I are very clear about clinical trials – he may not get the medicine, but we know that someone will.”

For more information on how to get involved with research at Sanders-Brown, call (859) 323-5550 or fill out the research interest form.