Markey patient Sarah Lister got to meet her bone marrow donor for the first time at Markey's Expressions of Courage event.

LEXINGTON, Ky. (June 6, 2018) – When her doctor called her around seven o’clock one January evening, Sarah Lister knew it meant nothing good.

“You know that’s not a good sign when they call you at home at night,” she said. “He said, ‘I’m so sorry to tell you this, but you have acute myeloid leukemia.’”

The former Ronald McDonald House director immediately went into planning mode, making calls and arrangements to keep her work and family affairs in order while she prepared for an expected 30 days of inpatient treatment at the University of Kentucky Markey Cancer Center.

“For the next 48 hours, I was super strong and super organized,” Sarah said. “The first cry was not the call with the diagnosis. It wasn’t even when they got in there to do the bone marrow biopsy, which does hurt… [I didn’t cry] until my doctors came in and said I wouldn’t be able to see my children during my treatment.”

Sarah’s cancer proved particularly aggressive. For more than four months, she remained an inpatient at Markey as she waited for a bone marrow transplant, her only option for beating the disease. With no family members as a match, her doctors turned to national bone marrow registries, seeking out an anonymous matching donor.

As the days, weeks and months drew on, Sarah confessed that her optimism began to waver.

“I started wondering if maybe there wouldn’t be a match, and I had to start entertaining some really difficult thoughts,” she said. “How would I prepare my family for life without me?”

She even began planning her own funeral, thinking ahead about how she could relieve some of the burden on her family if she were gone.

“Just when I was starting to get organized and think about my memorial – who I wanted to be there, what songs I wanted played, who was going to help my husband with our kids and take care of my mother who lives with us – that’s when the phone rang,” Sarah said.

In July 2016 – the day after her 46th birthday – Sarah underwent a successful bone marrow transplant. She knew nothing of her donor, only that the stem cells were a “10 out of 10” match. She also knew that she wanted to find a way to thank her donor one day.

“My initial reaction was, ‘Who is it, and how do I send a thank-you?’” she said. “One of the things I fantasized about, that helped get me through my recovery, was ‘One day we are going to have the biggest party!’ I really thought about all the ways I wanted to say thank you.”

One year following the transplant, the DKMS bone marrow registry gave both recipient and donor the option of exchanging contact information. Both said yes, and Sarah finally knew the name of the person who had saved her life: Thaddeus Kunkel, a young man who was a junior neuroscience major at Michigan State University when he joined the registry.

Thad, just 21 at the time, said he had always intended to join a bone marrow registry at some point. Most of his family members had joined in previous years, but he had been too young.

“The registry had been on my radar before,” Thad said. “It was always something I knew I should do, but I just never got around to it.”

In late 2015, an opportunity to join the registry presented itself, when an MSU sorority ran a DKMS donor drive on the Michigan State campus. Passing the booth between classes, Thad decided it was time to join.

“They also had the extra added incentive of giving away a donut for signing up,” he joked.

After swabbing his cheek and sealing up the testing kit, Thad said he went on with his busy life, never expecting to be contacted. But just a few months later, he got a call requesting a preliminary blood test for a potential match. And after that initial blood work, he got another call, this time telling him he was the best match for a candidate, and asking if he was absolutely sure he was ready to undergo the donation process.

“They asked if I’d be willing to donate, and they wanted a solid commitment,” Thad said. “The process that the recipient goes through, if they don’t receive bone marrow – like if I backed out at the last minute – the patient would probably die from the prep process.”

Though he was a little overwhelmed at the whirlwind development – and, as he freely admits, more than a little afraid of needles – Thad decided to go for it.

“I had nothing to lose from it,” he said. “And someone else has everything to gain, so how can you say no?”

Five days prior to the donation, Thad was given a series of filgrastim injections, a drug that forces more blood-forming cells from the bone marrow to the bloodstream. On donation day, his cells were harvested via apheresis: an intravenous line removed his blood from one arm, a machine separated donor stem cells from the rest of his blood, and another IV line returned the blood back into his body.

The whole process took around 7 hours, and while Thad described that day as “draining,” he says that overall, it wasn’t bad.

“I was pretty tired afterward, but I was back at work the next day,” he said. “I would say it was a pretty good experience.”

Thad received a thank-you letter from Sarah after the donation – kept anonymous at the time – and after reading it, knew he wanted to learn more about the person who had received his stem cells.

“She seemed so friendly in her letter,” Thad said. “I wanted to hear from her to know that she was doing well, and just the confirmation that I was able to help someone feels good.”

In March 2018, Sarah gathered her family into her dining room for an important phone call. With her husband filming and her older son, Thomas, at her side, she called Thad, now 23 and a medical student at the University of Michigan.

Their conversation ranged from the silly – with Sarah asking Thad if he liked Mexican food and pickles, two foods she had never craved prior to receiving his stem cells – to the serious.

“You’ve literally saved my life, and changed the life of my children so that they could have a mom to be with them,” Sarah told him. “One of the first things we talked about when I came home from my bone marrow transplant was how special it was that there was somebody in the world who was willing to make that sacrifice.”

But for Sarah, letters and calls weren’t enough; she wanted the opportunity to thank the young man face to face. She suggested that Thad come to Lexington to visit during the UK Markey Cancer Center’s Expressions of Courage event, an annual celebration of cancer survivorship.

He agreed, and Sarah began making phone calls, looking for ways to give Thad a warm Lexington welcome.

“I was the executive director for the Ronald McDonald House,” she said. “I’m not afraid to ask for things!”

Last Friday, with her family in the front row and young Thomas by her side, Sarah got the opportunity to present Thad and Isi with these gifts in person as they met for the first time onstage in front of more than 200 Expressions of Courage attendees.

Thad – who admits he’s on the shy side and described the whole experience as “overwhelming” – told the crowd he never anticipated that he would be called upon to save a life.

“No way did I ever think this would happen,” he said. “It’s an experience I’ll never forget… if people here aren’t on the registry and are thinking about it, it’s definitely a good thing to do.”

For Sarah, the moment was truly a dream come true. Fighting back tears, she called out the importance of the team around her, thanking the Markey nurses and doctors who continue to care for her, as well as her personal support system at home.

But, she noted, Thad’s generosity was the biggest reason she’s still here today.

“Despite having an amazing team of family, friends, coworkers and so many people who are here today, not one of them could do what this man did to save my life,” she said. “And I am forever grateful.” 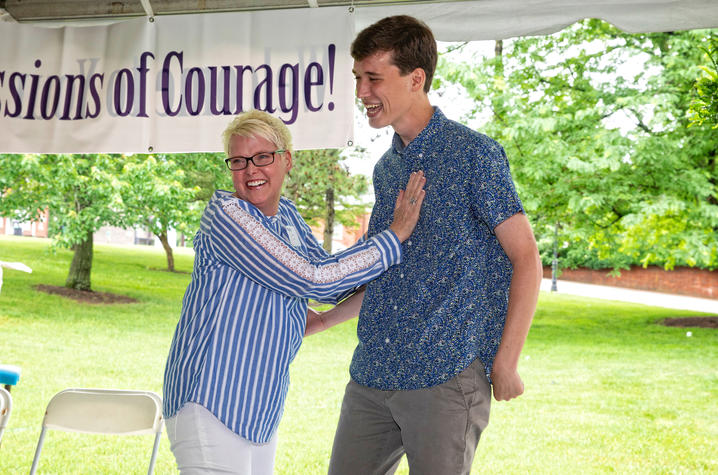 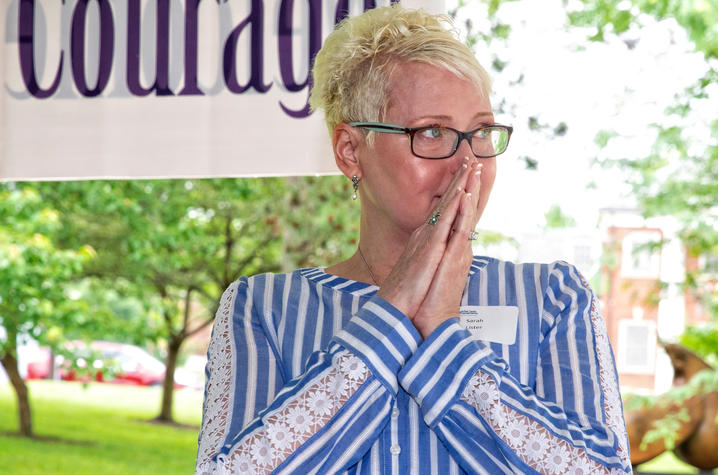 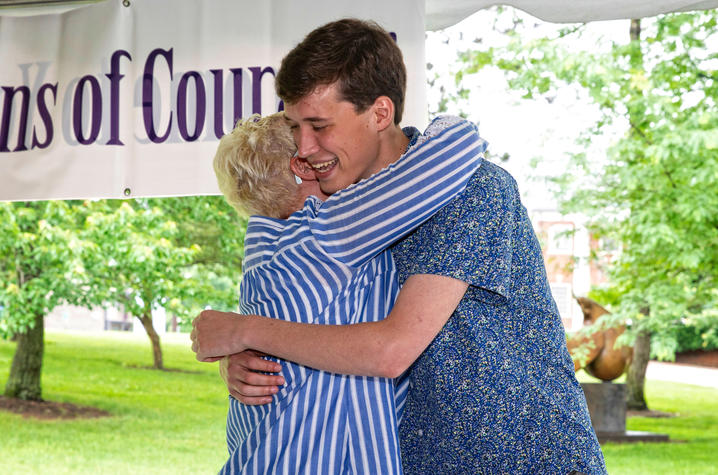 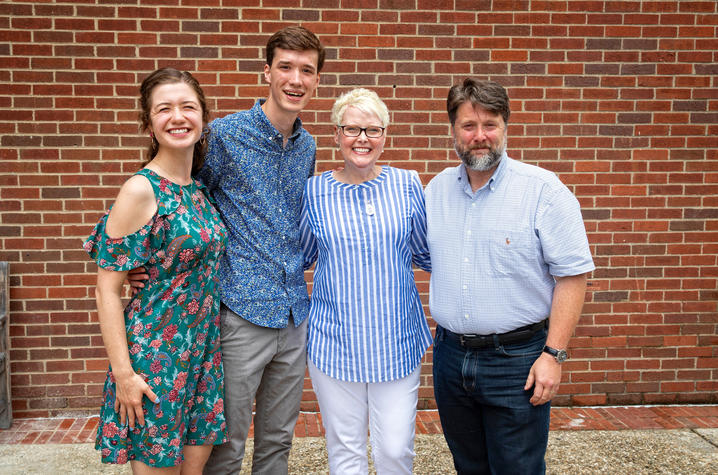