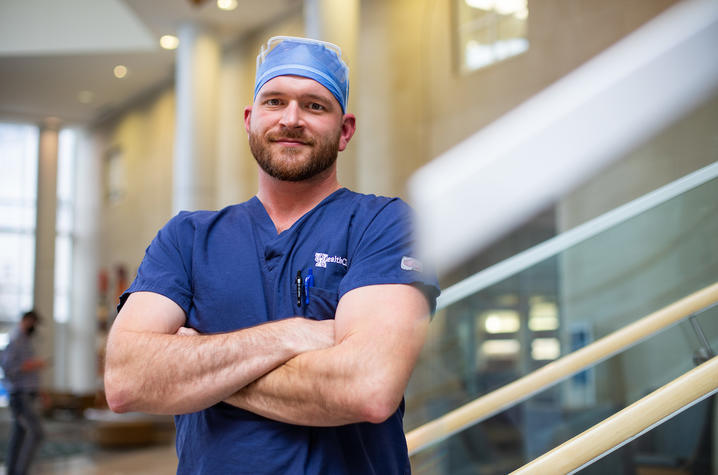 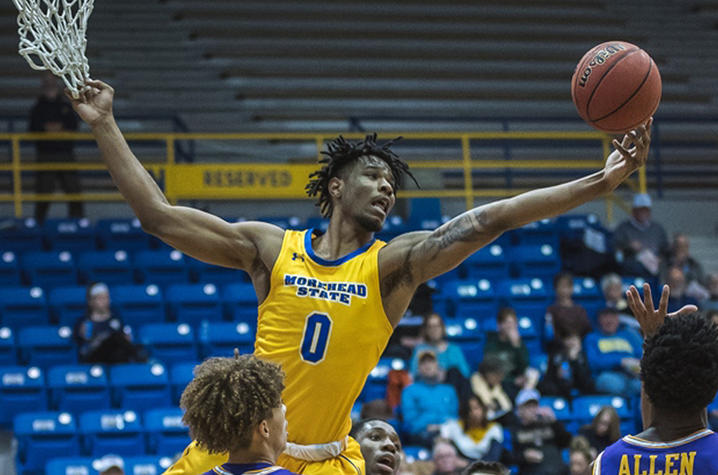 Claude’s team was in one of their final preseason practices before the season opener.

“We were doing a rebound drill and I went up to grab it and came down on my teammate’s foot,” Claude said.

“It was especially frustrating because we were just getting started,” Claude said.

Coming off of his freshman year as the team-leader in rebounds, Claude was looking forward to an exciting and dominant season. Instead, he was forced to watch the team’s historic season from the sideline. The Eagles ended up winning the Ohio Valley Conference Tournament and appeared in their first NCAA Tournament in nearly 10 years.

Bound and determined not to miss another year, Claude knew he would need to dedicate himself to physical rehabilitation.

Thankfully, he has a team of highly skilled sports medicine physicians and trainers behind him.

ACL injuries are some of the most common among athletes. The ACL is one of the main knee ligaments joining the upper leg bone and the lower leg bone, keeping the knee stable during athletic activities. An ACL injury can happen if your knee joint is bent backward, twisted or bent from side to side. For example, if you change direction quickly, slow down while running or — as in Claude’s case — land wrong from a jump. The injury is common in sports with a lot of stop-and-go movements, jumping or weaving.

UK HealthCare Orthopaedic Surgery & Sports Medicine is now the official health care provider for MSU Athletics. Athletic trainers and team physicians are on hand at every practice and game. The collaboration started in the spring of 2020. So far, the trainers and physicians have treated dozens of athletes and, while some do require surgery, many athlete’s treatments are preventative or rehabilitative.

“The collaboration is mutually beneficial. We as UK HealthCare providers enjoy working with these elite student-athletes to keep them healthy or help them back from an injury the right way, and it has been great for us to expand our network of athletes across the state that we care for,” Wilson said. “On the other hand, the MSU athletes have access to UK Sports Medicine and all of the innovative work we are doing, as well as access to other subspecialties and services that smaller health care systems may not offer.”

Recovering from an ACL injury and reconstructive surgery is not easy or fast. Claude said he knew from the onset that a positive mindset would be key. He started with simple mobility exercises before moving on to strength and weightlifting, and eventually worked up to game-day movements with UK trainer Jordan Kelley. He said the constant communication with Kelley and Wilson during the recovery process was unmatched.

“They actually care, and they always had the answers,” Claude said. “They made themselves available to help me whenever I needed it.”

Nearly a year later, Claude is gearing up for the season ahead — and he’s feeling ready.

“I feel confident,” he said. “I was worried that I would never feel the same as I was before my injury, but I feel like I’m almost 100% back. I’m in a good spot right now.”

Wilson is equally excited to see what this year holds for Claude.

“The recovery after an injury like Tyzhaun had is a long and sometimes frustrating road,” Wilson said. “Tyzhaun has done an incredible job of getting himself ready for the upcoming season. He and Jordan have been working non-stop for most of the past year, and Tyzhaun has never let himself get down. I think that effort and attitude will show incredible dividends on the court.”